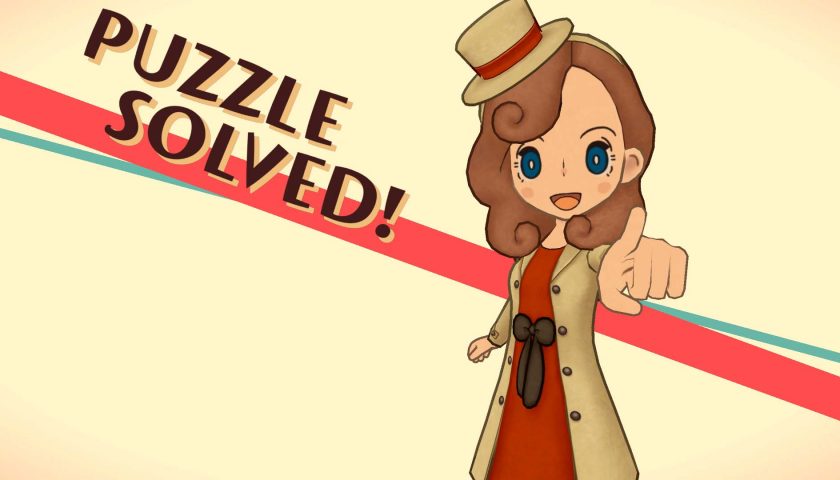 There’s an innate sense of accomplishment that comes from recognising, and then solving, a dastardly puzzle – especially if it’s a trick question. The Layton franchise is certainly fond of trick questions, and has offered players a series of puzzle-rich titles across several platforms. While I’ve not played every single title, I’m generally fond of them and take the opportunity to play through them alongside my wife whenever a major release is noticeable. This review is thus bifocal, viewed through both my reviewer eyes and those of a light gamer in my wife.

Layton’s Mystery Journey begins quite nicely, with an animated introduction that looks as good as a proper series. It establishes that Katrielle, the daughter of Professor Layton, is reopening the family detective agency. She then meets a talking dog (natch) and then they start their first case, which involves the disappearance of Big Ben’s clock hands. This may sound like grand public larceny, but trust me the whole thing is rather light in nature.

Perhaps the most jarring aspect for my wife was the sheer amount of dialogue to click through. I’m used to it from titles such as the Ace Attorney series, but watching someone who just wanted to get to the puzzles was a bit uncomfortable. It’s not that Katrielle and company aren’t charming enough, but after a while the dialogue does tend to turn a bit vapid and feel like deliberate padding.

Thankfully, once the intro is dealt with, you can go into the daily puzzle menu, where there is a collection of brain-teasers to work through – with a new one appearing each day for a year, apparently. The puzzle types here seem quite similar, but they do build in complexity and offer a small challenge to a general audience. Perhaps the most difficult aspect, especially playing docked, is controlling the overly sensitive icon on the screen. Most puzzles also require you to grab, move and place objects. I watched my wife struggle with this as the thumb-stick sensitivity is set too high and I could not find any options or settings to change it. This isn’t such an issue when playing in handheld mode, as you can use a stylus or your finger to interact with puzzles. This aspect obviously stems from the game originally launching on 3DS.

The game is structured around separate cases, twelve in all. The way that you work through cases is quite simple and streamlined. You’re presented with a bit of dialogue (okay, a lot) and then given a few nicely painted scenes to move an icon around and interact with. This includes talking to people (and animals), rustling bushes for hidden coins and searching for hidden puzzles, pixel-hunting each scene until it is exhausted. Interviews and puzzles then give Katrielle little nuggets of knowledge which she stores away. After you’ve gone through the required scenes for each case, she automatically solves it. It is all definitely streamlined, one might almost whisper “casual”, but it works fine and my wife enjoyed the challenge of making certain there were no more hidden things at each location before deciding to move on.

Puzzle wise, things also feel easier. I miss those real brain-busters, the type your year 6 teacher used to give you to waste an entire maths lesson on. Instead, we’re offered puzzles you might find in one of those newsagent puzzle books, designed to make you feel smart without being too much of an actual challenge. But you know what? That’s fine, because we all want to feel smart and there’s nothing wrong with popcorn entertainment. There are a few duds, though. Some just are not explained well at all and we gave up trying. It’s not too fun just guessing through the options until the correct answer. Overall though, the puzzles are fine, even if some are uninspired.

One thing I do like is how you can bring down a transparent overlay on the screen and draw over a puzzle to try and solve it. This saves the need to have a notepad and pen nearby. We had fun solving quite a few puzzles using this feature, even if quite messily! The voice work is generally good, too, with the longer passages of dialogue understandably text only. After a while, we found ourselves skipping through these sections as we just wanted to get to the next puzzle.

Layton’s Mystery Journey was reviewed on the Switch, with the game having been purchased by the reviewer.