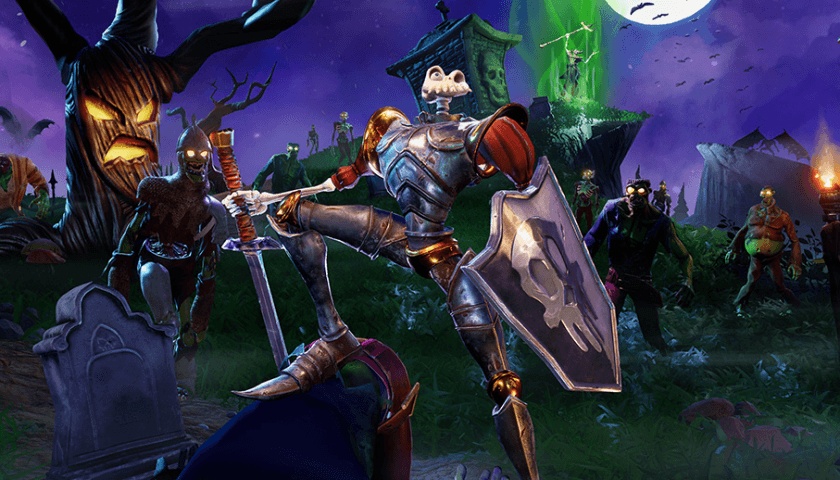 Medievil Review – Skeletons In The Closet

Gaming was different in 1998. It was a simpler time; the consoles were comparatively (to the modern day) primitive, there wasn’t an online system that fundamentally fuelled the way that games were both made, or even discussed, and Medievil, from SCE Cambridge was an important part of the Playstation stable. Sir Daniel Fortesque’s debut title emerged in an era where Playstation were stocking up on mascot characters (Spyro, Crash Bandicoot etc) to go head-to-head with Nintendo and Sega in the console wars. Though many thought that the “Mascot Platformer” was the way to go to attract the crowds, SCE Cambridge had other ideas, bringing Dan to life in an action/hack-and-slash game that was received quite well by fans and critics alike. That was 21 years ago though, and in 2019 we’ve been the recipient of a remake of that game, but, all these years removed, can it still hold up?

Mixing a wonderful sense of humour and a simple, yet mildly engaging narrative, Medievil’s 10-12 hour duration begins with Sir Dan being revived, a century after a less than glamourous end to his first life; an arrow to the eye during the first charge in the war against Zarok put an end to him. Zarok ultimately went on to lose that war but 100 years later has come back, and awakens his undead army; the catch is though that in doing so, he’s also revived the bumbling hero Sir Dan Fortesque, sans eye and jaw. Learning that it is Zarok’s return that has begun this series of events rekindles Dan’s desire to be the hero and as such he strikes off on a journey to save Gallowmere. Though basic, the humour, which is more often than not at Dan’s expense continually amuses, and the story remains engaging enough to steer the journey. The remake has seen the original cast reunite to revitalise their roles so the old voices are nice, despite the fact that both the story and the dialogue have seen no changes of any prominence.

Another aspect of the original game that hasn’t changed with this remake is the gameplay and world design. If you played the original release (not so much the Medievil PSP title which did receive some tweaks), then you know, beat for beat how to play Medievil 2019, from the bosses to the puzzles, to where to find each collectable; it’s all exactly as you remember it. For those who don’t come at the game with that level of familiarity, there’s nothing that will stretch your limits too far, the hack-and-slash combat is fairly simple and easy to overcome most of the games toughest challenges with a bit of wit and flair. The world itself has been, as previously discussed, pulled straight from 1998, and as such has all the invisible walls, hitbox/collision inconsistencies and exploits that you would expect from a game of that vintage. It’s a nostalgic ride, but depending on your tastes, and history with games, it may not necessarily be a pleasant one. It’s jarring given what we’ve become accustomed to in recent years (CrashN’Sane Trilogy and Spyro Reignited Trilogy), which actually made several, quality of life improvements in their releases to “modernise” the game – that isn’t the case with Medievil. For good or bad, it’s Medievil, the way you remember it; and yes, that includes the painful camera which seems to wish to obscure you more than it aims to help you.

What everyone can agree on is that the original Medievil looks a little rough these days, as do many games of the PS1/N64 era, but the work that OtherOcean has put in to revitalise the game has paid off immensely in the visual department. Dan looks great, and the world perfect for Halloween-time consumption. The environments from the original release were diverse, so you won’t feel as though you’ve been somewhere before despite the dark, spooky, graveyard setting. Some locales are ripped from vintage horror troupes, such as graveyards and hedge mazes, but other settings include vibrantly detailed and coloured caves littered with dazzling crystals, among others. The soundtrack, has also been remastered and fits nicely with the on-screen action.

Though you’ll struggle to find a more faithful remake than Medievil, the skeleton of this game is so grounded in the past that it might be hard for new players to approach and appreciate without that history behind them. It’s important to look at the game for what it is; as a time capsule, it’s almost without peer when discussing the truest video game remakes, but as a modern release, it’s going to be missing the bells and whistles that we’ve come to take for granted and expect as givens in the modern climate.