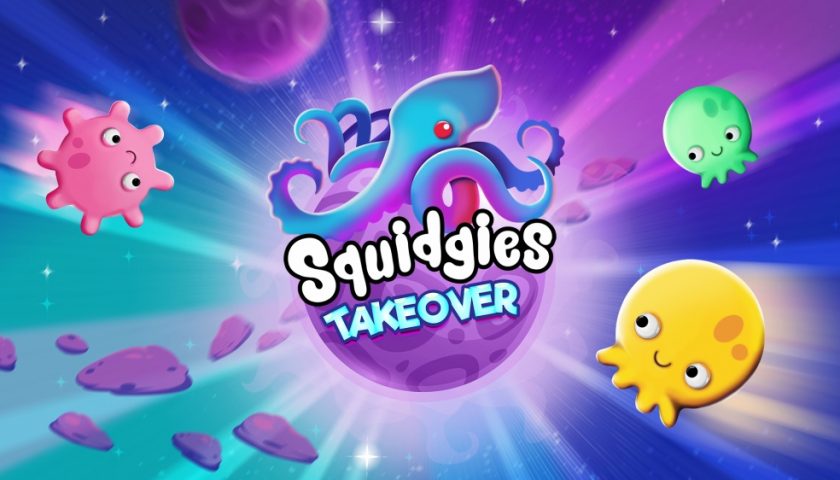 Settling life on a new planet is hard. We know this, because if it were easy, humans would’ve done so already. Over-population, as well as a host of other issues make it very easy to see why we’d want to do more to traverse space and find a new home, and it’s over-population as it so happens, that is the driving factor of Squidgies to do the same. Giant Margarita, the team behind recent party game gems such as Party Golf, Party Crashers and Party Poppers, has broken with traditional naming convention to develop Squidgies Takeover, a puzzle game that is as cute and colour as it is soul-destroying.

Though their previous works were competitive couch-based games, Squidgies Takeover reverts back to a (fairly) simple, single-player experience. The Squidgies home-planet has become a little too tight and squishy, and so, the fledgling race departs across the universe to claim as much territory as possible… and that’s it, the remainder is in your hands. With no real narrative to speak of, the entirety of the experience needs to be carried by the gameplay alone, and if you’re into puzzle games and pinpoint handling, then Squidgies Takeover might be exactly what you’re looking for.

Following a quick tutorial that outlines all the different power-ups that the game boasts (more on them later), you’re thrust into a fairly open map with a range of potential levels to complete. Though the full roster of 80 levels isn’t available to you from the get-go, you’re not forced to complete the levels in a linear fashion, which is handy when you eventually come to some significant progression barriers fairly early on. The first ~20 levels are straight forward enough, and then, suddenly, the difficulty spikes, and for the majority of your playtime from there on, you’re in for a tough time it, with the completion of any level feeling like a major accomplishment. Additional feats exist for the hardest of hardcore puzzle fans that layer an extra hard set of objectives on top of every level. These, along with online leaderboards provide decent incentives to return to previously mastered levels with the goal of improving your results.

The number power-ups themselves are limited to six, but each are critically important to your success. Push, balloon, metal, tube, grapple and stop, make up the six power-ups and while early levels tend to focus on only one of them, steering your strategy towards one train of thought, others look to combine any number of them in different ways, multiple times, in order to escort your Squidgies safely to their destination. The Push power-up rockets any Squidgy that comes in contact with it off in the prescribed direction, the balloon power-up acts as the name would suggest, lifting the Squidgy above any looming hazards, metal-powered Squidgies aren’t affected by fire or electricity, but absorb it and can potentially harm any others that come in contact with it, the tube Squidgies create a long safety tube that other Squidgies can rocket down, grapple allows the Squidgy to latch onto a surface and swing to another platform, while stop turns the Squidgy into a heavy boulder that others can’t forcefully push through. You’ll certainly find that some power-ups are utilised across more levels than others, but as they all begin to come together in some of the games toughest levels, you’ll quickly appreciate the surprising versatility, and many creative uses, of each power-up.

A small handful of barriers to progression exist, in the form of gems. In a few cases it is impossible to access certain levels without having previously completed a particular preceding level. Upon completion you’re rewarded with a gem, and this gem unlocks all levels hidden by the same gemstone. There aren’t many of these particular levels to overcome and they don’t prevent access to many others, they’re simply there to force you to try out particular power-ups that you may not yet have experimented with. Overall progression is quite basic, and the small barriers placed in front of you are simply there to ensure you get the base understanding of a mechanic before the kitchen sink is thrown at you.

Squidgies Takeover’s extraordinarily high difficulty ceiling, from the core objectives themselves to the additional feats even after you’ve achieved success might certainly put the shivers up the spines of some potential players, but the core product is a good one, and with more missions promised for post-launch, there’s going to be plenty for the hardcore puzzle gamer to dive into. This is a planetary takeover I can get around.

Squidgies Takeover was reviewed on the Nintendo Switch, with code kindly provided by Giant Margarita.