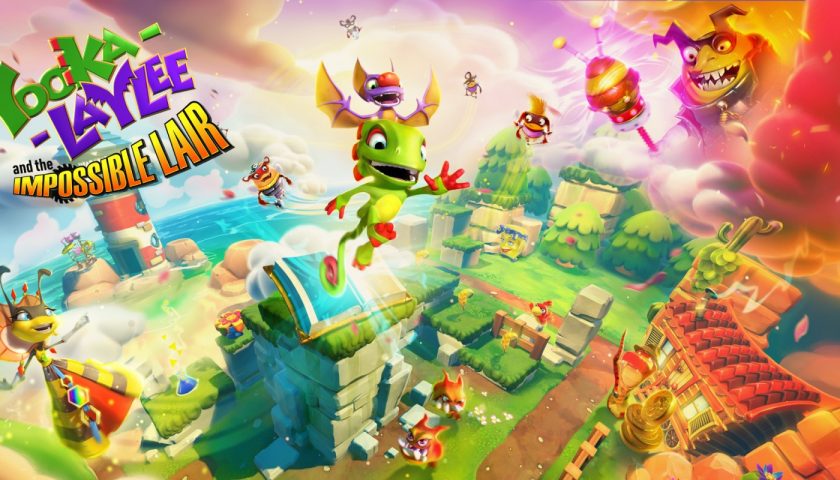 After a fairly lengthy crowdfunding campaign in 2015, and smashing the original goal in less than 40 minutes, the adorable pairing of Yooka-Laylee was realised. When Yooka-Laylee finally released in 2017 it ultimately landed with a thud. Playtonic, a team that was born of ex-Rare employees, looking to re-create the magic of Banjo-Kazooie were unable to replicate the spell that captivated so many millions of fans back in the 90s. The pairing worked, but the game fell flat, leaving the future of the franchise in limbo in the eyes of many. What would a Yooka-Laylee 2 look like (if it happened at all)? Well it turns out, if you’re Playtonic, you bring your new mascots to an older age, the age where these talented ex-Rare folk first began to really master their craft – they turned Yooka-Laylee into a 2D platformer, and the fruit of their labour is something quite marvellous.

Some of the finest examples of 2D platforming on the Super Nintendo came in the form of the Donkey Kong Country games, each of which were developed by Rare, so what better to do than to return to your roots and repair any damaged good-will with a title that works to your strengths. Yooka-Laylee & The Impossible Lair is nothing short of a masterclass in gameplay, design, and challenge, giving players a new take on the traditional platformer. Capital B is at it again, once thought thwarted following the conclusion of the original title, the dastardly doofus has managed to somehow take over the ‘Royal Stingdom’ and Queen Phoebee’s ‘Royal Beettalion’, Yooka-Laylee are out to put a stop to that, rescuing as many members of the Beetalion as possible before launching a counter-offensive upon Capital B. It’s not an inspiring plot, but it provides enough of a spine for the world/level design as well as scaffolding for the punchlines that you’ll not really notice.

There are 60 members of the Beetalion to rescue, but the great innovation at play in Yooka-Laylee & the Impossible Lair is that, if you’re supremely skilled, you won’t need to rescue even one of them. As the title of the game suggests, The Impossible Lair is the key part of this experience and is certainly one of the more gruelling gauntlets you’ll experience in games. You’re thrust into the action quite quickly, and your first task is to chase down Capital B and take him out; you’ll most likely fail, and are kicked to the overworld where it’s explained to you that all members of the Beetalion have been scattered and that by rescuing them all your chances of defeating Captial B will rise. You see, the first level you enter, and inevitably fall in, is also the games final level, and can be attempted at any point, similar to how players could immediately tackle the endgame in The Legend of Zelda: Breath of the Wild, or Ghost Recon: Breakpoint, if they so desired. With every member of the Beetalion that you rescue, Yooka and Laylee can take one additional hit in the Impossible Lair, and whilst that might sound very generous (remember, there are up to 60 you could rescue), in actual fact you’ll need every last one, because the Impossible Lair is brutal. Even seasoned pros might find themselves struggling to get through without at least a little extra help, because once you’ve exhausted your supply of Beetalion guards, you’re vulnerable, and failure could only be moments away. The Impossible Lair’s incredibly long gauntlet is occasionally punctured by more encounters with Capital B, only compounding the number of opportunities to take a hit.

For some players, it may also take a little while to adjust to the movement of the duo, with Yooka-Laylee feeling heavier than Mario, but less so than Donkey Kong, potentially requiring you to recalibrate yourself a bit before looking to string together your best platforming maneuvers.

In order to build up your army, you’re going to need to head out into the world and complete as many worlds as you can, and this where the game shines the most. Each world looks and feels unique to the others, and each has an Unaltered and altered form as well, the altered version becoming available after making some sort of change to the overworld. As one example, you might freeze a previously underwater level meaning that the whole above-ground portion of the world is now accessible, opening up an opportunity to rescue another Beetalion member. It’s abundantly clear that immense thought has gone into each and every level, pre-alteration the design of each level appears fantastic, but when you finally unlock the alteration, you will get a heightened appreciation of the incredible forethought that took place at Playtonic. Within each level there are dozens to hundreds of quills to collect, five golden coins as well as the Beetalion member, so there’s plenty to uncover, on both run-throughs. The quills, as plentiful as they are can disappear in a flash thanks to the tonics you can buy that will either create funny cosmetic differences to our heroes or even gift you a perk for your travels – the catch with the latter though is that these perks will reduce the quill bonus for each level, minimising the number of quills you can take with you upon completion of a level. The coins, on the other hand, will lace the pockets of the greedy old Trowzer Snake who places a few large paywalls in front of you that you cannot hope to pass without enough of his desired currency.

For as superb as the game world has been designed for gameplay, it’s equally as superb to simply gaze upon. The original Yooka-Laylee, like the games that came before it, was never shy to use a wide range of colour, and this sequel runs even further than that, utilising every colour of the rainbow and then some. Our ears are also graced with another wonderful Grant Kirkhope classic soundtrack, and while the grunts and groans of characters in the world can be frustrating, you’re not in conversation that often that it will dampen the experience.

Though the original game was incredibly successful on Kickstarter, and then seemingly sold quite well upon release, it was clear that it wasn’t up to par by modern standards. Playtonic has hit back in sensational fashion with the launch of The Impossible Lair, showing the world that the glory days of those working on these games are far from behind them. Though feeling impossibly difficult at times, Yooka-Laylee & The Impossible Lair will be impossibly hard to put down.

Yooka-Laylee and the Impossible Lair was reviewed on the PS4, with the game having been purchased by the reviewer.