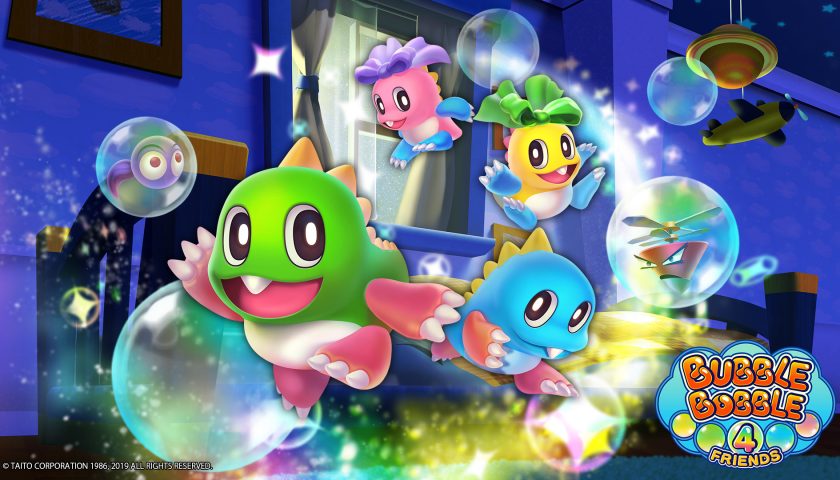 Now I know what you’re thinking, “wow there’s a FOURTH Bubble Bobble now!?”. Now that the fear is setting in as to how I manage to successfully read your mind, to answer your rhetoric thought, yes, a fourth Bubble Bobble has just made its way to the switch. For anyone not familiar with the series, originally released on the arcades in 1986 by Taito (which was then ported to home consoles by Toei Company. The two adorable dragons won gamers over with their simple but addictive gameplay of putting enemies in bubbles, popping them and then collecting giant fruit for a reward.

Since it’s initial release, the series has seen two more sequels, the last of which hit the arcades in 1996, so … one could say it’s been a long time between wickets. So, what can we expect to see from a beloved series after 13 years in stasis? Well, let’s find out.

If you’ve ever played a Bubble Bobble before in your life and enjoyed it, rest assured, the formula hasn’t changed much. You jump from stage to stage, putting enemies in bubbles and popping them, defeating all the enemies on the stage successfully gets you to the next, so on and so forth. Look, if the gameplay isn’t broke, don’t fix it right? Well, there are some changes, after successfully beating an entire world (that’s broken up in 10 stages and ends with a boss battle) you get access to a power-up with limited use. As an example, you can get a long shot attack or a lightening bubble, that when popped, will shoot lightning horizontally across the stage destroying everything in its path. There’s also now an ability to play local 4 player co-op, sadly this doesn’t extend to online, but this is the kind of game more enjoyable with people yelling and screaming next to you, so there’s no love lost there.

The stages themselves are actually quite challenging and they tend to have modifiers that add that extra level of complexity and strategy. Things like directional wind, which pushes bubbles down specific paths and platforms that you can jump through but only in an upward direction. On paper, this is all sounding pretty good, but that’s where the praise ends because there’s plenty of issues with this title. To start with, the game is incredibly short and can be smashed out in one sitting, after that you unlock a hard mode but it’s the same stuff, just more difficult. Speaking of difficulty, this game will definitely trigger your rage control at times and is quite frustrating (in typical arcade fashion). As you progress through each world’s stages, the difficulty definitely increases, including the boss battles, and although we can always appreciate a good challenge, it wasn’t bordering on the fun side. That being said, the challenge is there for you if you choose to accept it and even then if you find it too easy, there’s always hard mode.

Another annoying aspect to the game is the stage modifiers themselves, they’re simply hard to adapt to and generally not fun. In one stage, the platforms are virtually hidden and it’s quite difficult to gauge exactly where the wind is blowing and where your bubbles will go. This is exaggerated when the game itself feels like it’s over in the blink of an eye. A nice addition but maybe a sign of better times, the original arcade game is available to play, co-op, as well. We say a sign of better times because we’re reminded of how challenging it was to finish that game’s 100 levels using only one set of lives, all things considered, this is a fairly nice addition and perhaps it would’ve been nicer if we got both its sequels as well. But it’s still a decent little add-on that wasn’t expected.

The real shame here is that Bubble Bobble 4 still maintains a lot of that fun the original games had. If the modifiers, power-ups and difficulty spikes were to be ironed out, it could have been a real winner. For a game that’s going to set you back a decent sum of money, there’s just not enough content to warrant the spend. If you managed to see this one on a mega-discount then it would definitely deserve another look, until then, let this one sit on ice for a while.

Bubble Bobble 4 was reviewed on the Switch, with code kindly provided by PR Hound UK