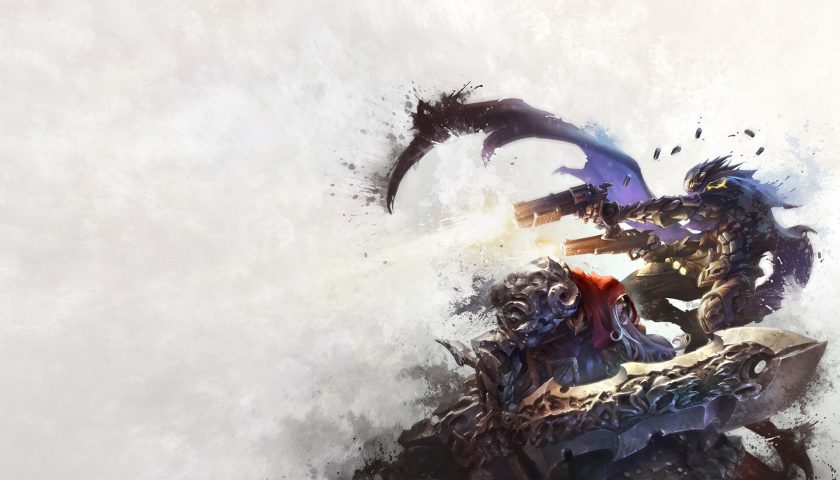 Darksiders Genesis – A Joyous Dance With The Devil

Up until this point the Darksiders franchise had managed to span three games, yet largely fail to progress the overall narrative much further than the original title. Across our time with War, Death and most recently Fury, an intriguing narrative design decision from (then) Vigil and (now) Gunfire Games, has meant that all three games plots have largely run parallel to one another, and so the story that was first begun with War in 2010 has remained unconcluded. Darksiders Genesis doesn’t do anything to tie up that narrative but does give us the first sampling of something different. Airship Syndicate, a team largely made up ex-Vigil staff have taken the reins on Genesis have broken with tradition, opting to tell us a story that is set before the events of the trilogy so far, and has taken things further by recalibrating the way with which we look at the Darksiders IP in a gameplay sense.

It was a bloody battle in Eden that lead the Horseman to gain their incredible power, a battle that necessitated the slaughter of their own kind, the Nephilim, to maintain favour with the Charred Council.  Now in the good graces of the Council, War and Strife have been given a new task by the Council, and it puts them on the path of Lucifer *yes, that one* who has been empowering Master Demons of Hell to upset the balance in the world. The Charred Council has sent the Horsemen to put a stop to the superpowered Demons and Lucifer’s plot, giving us the first story in the Darksiders’ history to be set before the events of the trilogy so far. It’s an intriguing, though (given where we know the story leads) inconsequential tale that has a clearly defined end-goal established from the early moments, without any significant twists and turns to alter the momentum or direction of the journey. That is, of course, fine, but not necessarily the most engaging of approaches to storytelling.

What Darksiders Genesis has done to get many tongues flapping pre-release however was overhaul the established gameplay formula. Genesis is a top-down title that some might compare to a Diablo game minus the loot, but in fact has more in common with the Tomb Raider spinoffs, Lara Croft and the Guardian of Light or Lara Croft and the Temple of Osiris. Though it can be played and finished as a solo adventure, Darksiders Genesis also supports 2-player cooperative play, a first for the franchise, and a thoroughly enjoyable addition to the formula. On a small number of occasions it can get a little disorienting as War and Strife dart around the battlefield, blasting and bashing their way through hordes of oncoming demons, but the majority of the time it’s actually like participating in a beautiful dance as the two skirt from foe to foe, crushing with a bevy of powerful attacks. As is tradition with the franchise, there are also some superbly developed puzzles present, but these take on different twists with the inclusion of a second player, which, while they’re subtle, show how versatile the initial puzzle concepts are when approached by two players.

Movement and maintaining momentum is the key in Darksiders Genesis. Standing still, even briefly, is fraught with danger, especially when tackling larger hordes of enemies. There are a few instances where you’ll find yourself getting stuck in the geometry of the level which can be frustrating, but not game-breaking. Unfortunately, the same will happen to enemies sometimes, and this can cause issues, with some specific enemies using a ground pound style of manoeuvre, which is designed to do significant AOE damage, but when they crash straight through the floor, get stuck, and prevent you from progressing because you needed to take them out in order to unlock a barricade . These imperfections, while likely not deal-breakers, nor frequent, occur just often enough to frustrate and hamper your progression.

Creature Cores are a new addition to the franchise with this entry and they act as the games levelling system. As you massacre the countless demons you encounter, some will drop Creature Cores, and with each, you collect you can fill a corresponding key slot to get a stat boost for your characters. Each Creature Core can be upgraded upon collecting more of them to provide enhanced boosts, encouraging repeated playthroughs of certain levels to grind cores out of desired enemies or bosses. For the majority of players who are tackling the basic difficulties, easy and normal, you won’t need to do more than apply the right core element to its matching key slot and you’ll always remain of a power level greater than what you’ll need, without requiring any griding. For those wishing to tackle the higher levels, hard or apocalyptic (only unlocked after completion of the campaign) then you’re going to need to grind out more cores to level them up. Though a simple system, it has been thoughtfully implemented in such a way that is accessible, yet still deep enough for those wanting to get into the weeds with it. An arena has also been introduced to the game allowing players to refine their skills, collect more souls and Creature Cores and have a little fun off the critical path. It’s a nice distraction and a good challenge for proficient players.

All key cast members from previous titles reprise their roles as War, Samael, and Vulgrim, while this serves as the first time we’ve heard from Strife in any form up until this point. With War being perpetually serious, Strife (voiced by Phil LaMarr) is the perfect foil; an extremely laid back, casual approach that, as the story develops, begins to partially rub off on the always agitated War. The voice-work is as stellar as always, though the subtitles sometimes lose sync with the spoken word making conversations a little disorienting for those who tend to combine both aspects of the dialogue. The soundtrack is equal parts sobering and exhilarating as is the way of the franchise, while the well established Darksiders visual style translates extremely well to the top-down perspective.

What Airship Syndicate have done is show the world that the Darksiders IP is more than a one-trick pony, and for those who’ve not been tempted by the core franchise entries up until this point, there is now a very different sample of the IP with which to taste. Everything Genesis does, it does quite well, and over the ~15-20 hour playtime (depending on how thorough you are) you’ll find it quite hard to identify moments of weakness. For existing and prospective fans alike, there’s much to love about Darksiders Genesis.