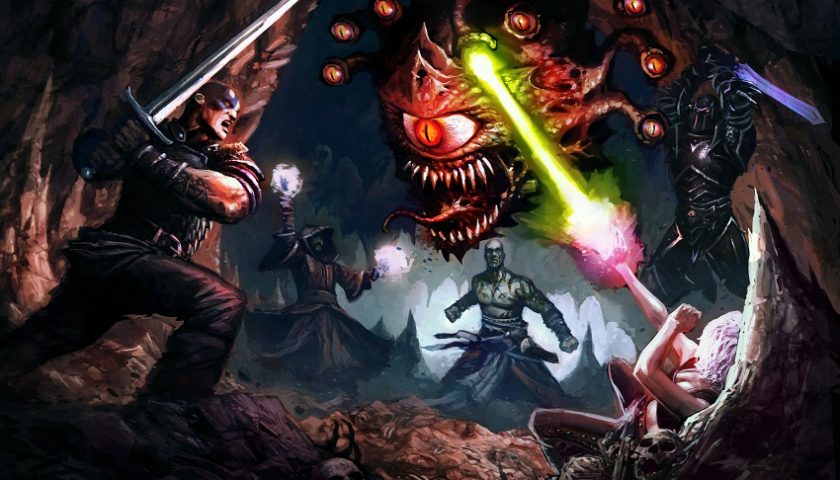 Recently, a host of classic D&D PC titles have made it to the Nintendo Switch so we gave Dylan Burns a mission, to play them all. This is what he found in the opening hours of each of these classic titles.

Taking Dungeons and Dragons to the Switch.

First impressions of this 2002 title are not good. The complex PC controls have been wrestled into a series of radial menus and button shortcuts, but remembering and navigating them all is a daunting task that only eases after many errors. However, if you can get past the laborious controls (just moving stuff in your inventory is done square by square), things eventually start to feel, if not second nature, then certainly third or fourth.

And while the visuals have most definitely not held up over time, this being one of the first RPGs to attempt a full 3D presentation, there’s no denying the magic of good writing in being able to stitch a game together and keep the player engaged. I chose an orc barbarian and the abrupt dialogue this guy has never fails to amuse me.

It probably took me a good two hours to finally feel comfortable with controlling the character, navigating menus, levelling up and working out how to manage a henchman. There is a pause function that shifts the icon to mouse-like control, which allows you to pick stuff up in your inventory and drag it around a bit more like you would on PC. It’s not perfect, but if you can remember to use it things become a bit quicker and easier.

Neverwinter Nights is obviously meant to be an online title. The Switch version offers co-op for all main play options, as well as cross-platform play. You can also join persistent worlds, where other players act as DMs. I should mention that this edition includes the Shadows of Unrentide and Hordes of the Underdark expansion packs, as well as a heap of free premium adventure modules, so you’re getting quite a whack of ye olde RPG goodness.

Again, Beamdog impresses by releasing the core games plus more expansions than you can poke a +4 rod of unlocking at. But for me, the best improvements are high-res text and the ability to dynamically zoom in and out as you adventure. The interface includes a more elegant radial menu than Neverwinter Nights’ and I found menu-hopping and inventory management a lot easier (although this could be that I’ve become adjusted to the minutiae of these games).

Once more, the writing is great and I’ve enjoyed being swept up in the simple yet engrossing tasks set out by my travelling companions. At its heart, Baldur’s Gate is a travel adventure and you hop between small outdoor maps on your way to specific locations. Along the way, NPCs will race at you and demand your help with a missing child or goblins or some caves that need clearing out. It’s very easy to surrender to the rhythm of this type of RPG and the quick-save nature of the Switch suits it perfectly, even if it often feel like each lunch-break gaming session is over before you’ve managed to slay the wizard.

I remember buying the second game on PC back in 2000 and poring over the massively thick instruction manual full of details about each spell and the other specificities of this highly complex RPG. Baldur’s Gate 2  was developed with all of the lessons learned from the first game, which was basically made at the same time as the engine running it. As a result, it rightly sits as one of the best RPGs ever. The only thing I would say is that modern gaming has streamlined a lot of things since, so these games can feel dated and overly laborious. Obviously, if you’re reading this, you understand what these games are, but it is worth warning that you must temper your expectations. These are the kinds of experiences that demand more from the player than we’ve grown used to.

I never played this one back in the day (I only had so much stipend as a youngun). I was immediately drawn to the premise of an icy world where frost giants threaten supply caravans and crisp forest floors crunch beneath your party’s feet.

There’s not a lot more I can say about this port as it utilises the exact same system as all of the games discussed above, a perfectly serviceable update that brings the game to the Switch with the modern convenience of radial menus and larger text size.

I do feel that this title is more action-focused, with lots of monster encounters in each area. There’s also a silly amount of flying gibs when you attack enemies, with killing blows causing them to explode loudly into meaty chunks, leaving only a handy pile of belongings behind to loot through. Just how did that orc carry seven axes and three bows on his person? I guess we will never know!

I love this game. And I love the idea of playing it on the Switch. There’s just one issue – the text is too small. It is immediately noticeable as soon as the game starts, and I had to squint to get through the opening before it would allow me to enter the menu to increase the text size. Unfortunately, even on maximum size, there’s something about the text font, or perhaps the colours used, that makes reading in this text-heavy adventure extremely difficult.

This said, I still feel that it is worth sticking with. The Nameless One’s adventure – to reclaim the memories of his previous lives – is the most unique and interesting in the sphere of RPGs and this game does a lot to play with your expectations of traditional role-playing. The use of magical tattoos instead of armour, for instance, or the fact that in order to continue you must sometimes succumb to death or body torture in order to find a necessary item or recover a memory.

While the tiny text is almost a game-breaker, I guess you can just hold the Switch closer. Planescape Torment is such an engrossing and original game that it’s worth it. The bizarre setting is still refreshing against the generic D&Disms of the genre and it features incredibly witty and funny dialogue.

If you remember the ‘good old days of hardcore RPGs’, any of these titles will scratch your itch nicely. With the exception of Planescape Torment, which has a jazzed-up UI, they all play similarly, with Beamdog’s menus and presentation consistent across titles. Planescape’s text size is an issue, but the game is so good that if you can forgive it there is a gem of a game waiting to be enjoyed on your Switch. Of all the options, I actually think Neverwinter Nights offers the most value. It may not be as good looking a game, having aged quite badly in that department. However, the included expansions and support for mods and online cross-play/co-op offers more potential content than you could conceivably require before some other Switch port catches your eye. But really, any of these will provide many hours of classic adventure. Dive back into your memories and decide which re-adventure awaits!