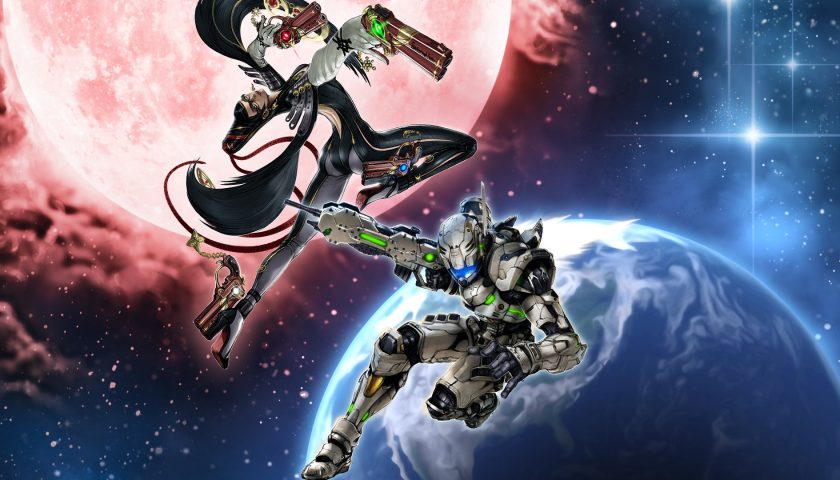 From the ultraviolent MadWorld to the hyper-stylish Astral Chain, Platinum Games has forged a decade of games defined by their willingness to divert from common gaming trends. Few other games from the Japanese studio encapsulate this ethos better than Bayonetta and Vanquish. Both releasing across PS3 and Xbox 360 in 2010 in the West, they quickly developed a cult following. While only Bayonetta continued as a series, Vanquish too left a lasting impact on players.

Beginning with Bayonetta, you play through a story of an Umbran Witch whose lost memories and quest to find the other half of her fancy magical jewellery set the scene. En route to finding answers, Bayonetta travels between heaven, hell and in between, fighting angelic entities who look like demons.

Honestly, the bonkers plot primarily serves as a vehicle for utterly ridiculous action and the eponymous character who wields pistols on her hands and feet. Oh, and she wears a skin-tight outfit made of her hair.

Inspired by the action-packed Devil May Cry series, Bayonetta is far from a simple button-masher. You’re encouraged to experiment with punches, kicks and bullets, often culminating in a flashy finisher where Bayonetta’s garb largely dissipates and reanimates into a massive stiletto stomp or pounding fist of pain.

Additionally, Torture Attacks use a full magic meter to dish out punishment and embarrassment in equal measures. These brutal and highly amusing moves range from summoning tombstones and iron maidens for pulverisation to a plain ol’ spanking and guillotine. Bayonetta’s got it all, baby.

Beyond a ridiculous arsenal of attacks, your witchy waifu can summon the oh-so-satisfying Witch Time after dodging an attack at the very last second. During Witch Time, everyone else slows to a crawl, giving precious extra time to land devastating combos. Activating Witch Time is always thrilling, as it gives you tangible feedback that you’re nailing combat.

Much is said about the pervasive male gaze in video game depictions of women, and Bayonetta straddles a very fine line between feminine empowerment and pervy fan-service. Delightfully camp and risque, Bayonetta owns her sensuality and flaunts it with complete control, playfully owning her portrayal. While the lens highlights moments of raunchiness, it usually doesn’t leer beyond quick-moving camera shots of how the Umbra Witch uses her wiles to violent advantage.

If there are any criticisms to be laid at the feet of Bayonetta’s remaster, it’s the textures do show their age and some light platforming elements feel fiddly. In addition, the frenetic cutscenes are occasionally difficult to follow due to lightning-fast edits and odd shot compositions.

Conversely, these cutscenes are the very essence of Platinum Games, the antonym of subtlety. Akin to the gameplay, fast-paced action is interspersed with punctuating moments of slow-motion – giving a brief moment of respite and an opportunity for Bayonetta to strike a sultry pose alongside a witty quip. None of these minor issues detracts from being a bad bitch. Bayonetta’s smart, sassy and sadistically fun to play as in this remaster’s super smooth performance.

Next up is the cult classic in Vanquish, the boosting, sliding, smoking robot shoot-em-up. Starring the gravelly-voiced Sam Gordon as an agent of DARPA, you fight against the big bad Russians who literally vaporised San Fransisco in an act of war. Unlike Bayonetta, Vanquish’s story feels overly cliched and not as interesting – it’s pulpy, guilty pleasure stuff. However, its bombastic presentation and ridiculous sci-fi military stylings fulfil that lizard-brain craving for mindless Michael Bay action.

All you really need to know is that Gordon brandishes a sophisticated mech exoskeleton known as an Augmented Reaction Suit (ARS). While many shooters before and since handle the act of shooting with more finesse and precision than Vanquish, they don’t let you slow-mo slide around in a jet-propelled mech suit.

Gordon’s ARS(e) empowers you to dash and enter brief moments of slow-motion at will, so long as it doesn’t overheat. If the suit overheats, both abilities are locked and movement is slowed until it fully recovers. Therefore, zipping around and shooting enemies becomes a delicate dance of managing your suit’s systems, lest you be left vulnerable in a critical state.

As a cover-based third-person shooter, Vanquish is the antithesis of Gears of War. Where Gears is deliberately heavy and slow, Vanquish is nimble and quick, encouraging you to always be on the move. In fact, with the time completion bonuses awarded after each chapter, Vanquish only wants you to use cover when absolutely necessary.

Going one better than Bayonetta, Vanquish includes much more weaponry to holster. You can hold three different weapons plus two grenade variants at once. All it takes to equip any one of the available rifles, shotguns and rocket launchers is to scan it into your DARPA tech – voila, you now have that gun! Additionally, after maxing out ammunition for a weapon, picking up additional ammo packs will result in incremental upgrades, including increased magazine capacity or damage. Thankfully, if you remove one gun in favour of another, they will retain acquired upgrades when you equip the same type later on.

Like Bayonetta’s remaster, Vanquish runs beautifully on an Xbox One X and arguably looks the slightly sharper of the two.

Looking back over the 10 years since both of these games originally released, many trends have come and gone. One anecdotal observation is that many big publisher-backed games in recent years favour weightier, more grounded forms of character control – with Red Dead Redemption 2 and the Resident Evil 2 remake extreme examples of this. Comparatively, Bayonetta and Vanquish feel light and zippier to move around. However, that’s not to say these previous-gen games are imprecise, merely that they reflect a different style of play which has continued as a core tenet of Platinum’s diverse catalogue of games.

And goodness, the folks at Platinum Games do such a fantastic job with slow-motion to punctuate action sequences. With Vanquish’s AR Mode and Bayonetta’s Witch Time, Platinum deserves more recognition alongside Max Payne’s famous Bullet Time mechanic. While the Japanese developers aren’t pioneers of slow-motion action in games, they’ve created some of the most enjoyable instances of playable John Woo-like moments.

Bayonetta’s cultural impact is arguably Platinum Games’ most significant achievement to date. With two games and a third (eventually) on the way, plus the Umbran Witch’s Super Smash Bros. appearances are recognition of how great a character she is and how fun her games are.