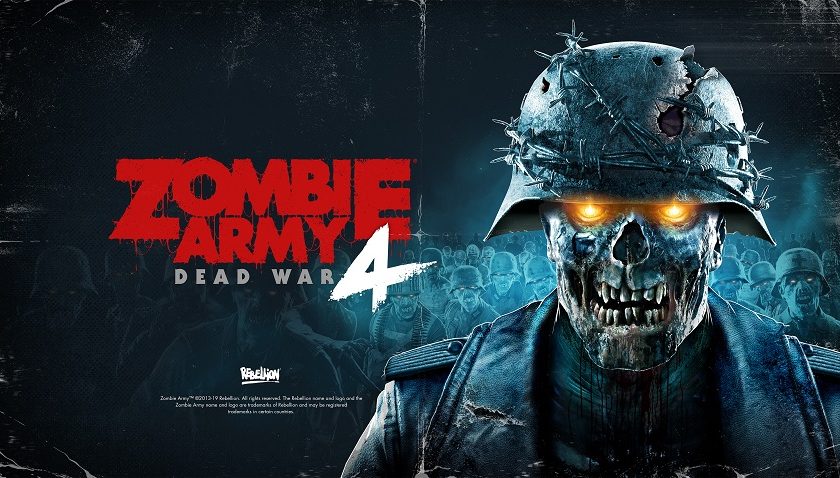 Zombie Army 4 – Bring Out Your Dead

As everyone knows, killing zombies is more fun with a friend so Paul and Matt decided to tackle Zombie Army 4 together. After all, what is the point of shooting a Zombie in the testicles from 200m if you can’t tell a buddy about it?

Matt: So, I want to get this out there, I have no history with this franchise at all. That being said, I do have a history with games like Left 4 Dead and the more recent World War Z, fun co-op shooters that while playable solo, are much better with a friend. Zombie Army 4 seemed at first glance to fit that category so I was quite interested to see how it turned out, especially as I quite enjoyed Rebellion’s last co-op shooter, Strange Brigade. I mentioned Strange Brigade because it is clear that the Developers have used that game as a template for what is happening here. Replace sassy British explorers with hardened war veterans and hordes of mythical creatures with hordes of undead flesh-eaters and voila! You have Zombie Army 4. Granted there are differences, but the DNA is undeniable.

Paul: You’re 100% right, there’s a great deal that Zombie Army 4 (and presumably the rest of the series, like you’ve I’ve not touched them) owes to the likes of Left 4 Dead, WWZ and Strange Brigade. I have to say that when you first reached out with a review code, I wasn’t at all inspired by what I’d seen, not because it looked like a bad game, but it just isn’t the sort of game that speaks too greatly to me. As it turns out though, I was sufficiently impressed. Yes, it’s not of the same level of polish as the big AAA titles, but it’s a dumb experience that I quite enjoyed. For a game that, in a host of ways, doesn’t really speak to me that says a great deal.

Matt: Well let’s start with the setup. Blah Blah, Nazis, occult, invasion, undead everywhere. You know the drill, this is not Shakespear, in fact, it isn’t even Clive Cussler, but really this isn’t a game that is about a stirring tale of resistance. No, it is a game about throwing as many Zombies as it can at the player with little to no explanation. But that is honestly fine because the game wears this arcade shooter badge proudly and never succumbs to delusions of grandeur. There is comfort in a game that strives to focus on one thing and do that one thing well. These sort of games will never be game of the year but they do have a place in our gaming libraries, they scratch a particular itch that not even the AAA titles do. Zombie Army 4 is a perfect example of that.

Paul: It’s big dumb fun, and as you said, many of these scenarios are thrown at you with little to no context at all. In the absence of that context, it does give you this sense of reckless abandon, and a bit more scope to be creative in your approach to combat. The shambling hordes facilitate this pretty well too; I love luring a giant crowd into a bottleneck before unloading a few rounds of one of my most explosive weapons in their faces. On the flip side though, Rebellion has thrown a few curve balls at you to keep on your toes. I got the shock of my life in the early stages of the game when one of those flaming zombies came running at me, only to explode in my face. These scenarios ensure that you’re not able to play with complete creative freedom, but don’t appear so frequently that they detract from the arcade-style fun. Did you have any particular favourites of the lot?

Matt: Early on there was a particularly satisfying battle with a giant flame-thrower wielding zombie that was made more difficult due to the fact I wasn’t carrying an automatic weapon, only my trusty sniper and shotty. This big guy was quick so it was hard to hit him consistently with single-shot weapons. But as all good heroes do I triumphed and went on my way with a smile on my face. Speaking of the weapons, boy does this game give you a lot of stuff to unlock. Mountains of guns, perks, upgrades, mods and skills to unlock using in-game exp. There is, frankly, a paralysing amount of options here. It will be many, many hours before I am even remotely close to unlocking all of this… stuff. What it does mean is that no matter who you are playing with, they are likely to have a different loadout than you, allowing for a huge amount of variety in potential playing partners and how they approach the zombie horde.

Paul: I definitely felt as though there was a little too much to unlock. It was overwhelming, and though there were certainly some cool perks attached to those, I couldn’t say I’d used them all simply because, by the time I’d unlocked them, I’d become quite settled in my particular approach to combat, with my preferred loadout for certain scenarios, and so I wasn’t feeling enough of a pull to change that. As you say though, it could be more beneficial when playing with friends to ensure that you’re all not rocking the same (or similar) loadout. Variety is the spice of life, and if your party is toting a diverse collective loadout, you’re certainly more likely to see success. This is a game that definitely lends itself more to cooperative play. Would you agree?

Matt: For sure, there is fun to be had, but playing with a partner will be where this game finds its legs. As the game is heavily built around sniping (considering it is a spin-off on the Sniper Elite franchise) it certainly pays to have someone watching your back and picking off zombies that get too close as you take out the rest from afar. Finally, I just want to bring one thing up that has been bugging me. While appropriately gory and thematic, the x-ray slo-mos that follow after a well-placed sniper shot does tend to take you out of the action a bit. They also get repetitive after a while, after all, there is only so many times you can watch zombie testicles be ruptured without grown numb to the intended effect. Did they start to bore you Paul?

Paul: It’s a gimmick that wears its welcome out quite quickly, as did the novelty of a few different aspects of the game in fact. Many of the game’s aspects really only thrive in a multiplayer context, and when playing solo, you’ll find these gimmicks to be a bit of a test of patience. PLAY IT WITH FRIENDS EVERYONE

Matt: Yeah this is a game for those with friends, but that being said there is enough there to ensure that even solo players don’t get bored too quickly. Zombie Army 4 seems like the perfect title to sit in your library, unplayed for ages but pulled out when the occasion demands and thoroughly enjoyed. Do you know what though? That is fine because that is exactly the sort of game that Rebellion set out to make and with that in mind, I would have to say that Zombie Army 4 is a complete success.

Zombie Army 4 was reviewed on PS4, with code provided by 5 Star Games Australia.