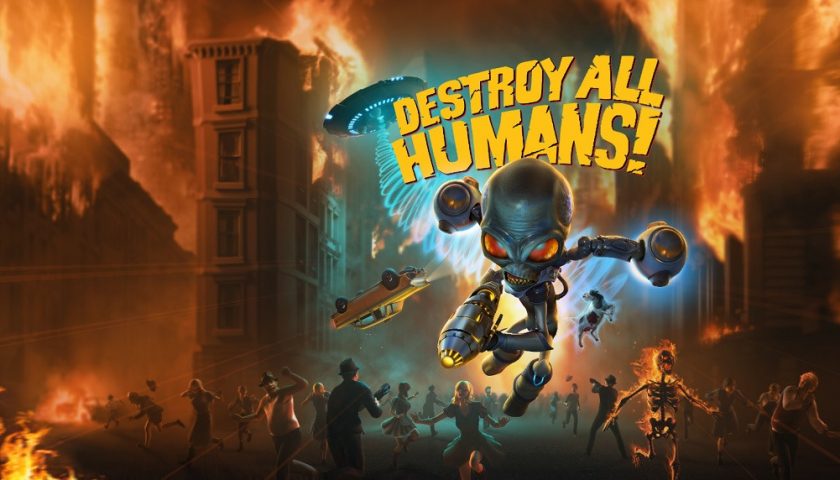 Mars Attacks, the stupidly over-the-top campy invasion flick from Tim Burton is something of a cult classic, it features a host of big Hollywood stars like Jack Nicholson, fighting off a vicious alien invasion from little green men. But what if, instead of focusing on the hero’s gamely fighting off the electro-zapping aliens in the most cheesy of ways, the focus was on the Alien’s perspective. Why were they invading? Why are cows and rednecks abducted? How are they going to take over the world? Well, welcome to Destroy All Humans, where you take charge of an invading alien who is bent on taking over our planet in the cheesiest of ways.

For those late to the story, Destroy All Humans (and its sequel) were open-world titles on the PS2 and Xbox. They had cracking humour and clunky controls in equal measure and while they did reasonably well sales-wise, Destroy All Humans never became more than a quirky and problematic title of its time. So when THQ Nordic announced its intentions to remaster the first game, I was a little surprised. After all, they have more illustrious names under their belt ready and waiting for a re-release but they choose to go with the weird alien game. I have to admit, I was a little perplexed why this choice was made, but after playing the game at a recent press event I am starting to understand why.

The first thing I noticed was how good everything was looking. This is a proper remake, not just a resolution upscale, and the artists have done a wonderful job of retaining the look of the franchise while updating it for the modern era. Crypto, (the alien that players take charge off) looks wonderful, with some lovely detail evident. The local humans all have a wonderful cartoony look to them, playing up common stereotypes for exaggerated effect. This enforces the idea that while this game is a big open world with tonnes of stuff to do, comedy is still a focus. Speaking of comedy, even in my short time with the game Crypto dropped out some chuckle-worthy lines in his faux-Jack Nicholson voice to great effect. If the zingers keep coming, without repeating too often this could well be a game that keeps me giggling from start to finish.

The original title had pretty clunky controls. Crypto had a range of abilities and sorting through them on the fly was a pain that often led to making situations worse. I am pleased to say that this has been fixed in the remake. I was surprised at how good the game felt. Combat was a treat with Crypto’s dash, jetpack, electro-gun and telekinesis all mixing together wonderfully to create a chaotic and entertaining gameplay loop. The flying saucer sections were also much improved in the small area that I got to experience them. I am really looking forward to seeing how it holds up over the length of the game.

So why did THQ Nordic decide to remake Destroy All Humans? My guess is because it had a solid foundation, namely the cool concept, and they could see all the areas that could be improved upon to bring it up to a standard you would expect in today’s day and age. From my (admittedly short) time with the title, they are doing exactly that. With this sort of game, it is always a question of how it will hold up for 10,20 or 30 hours, but as it stands I am much more excited for the release of this remaster than I initially was and I think you should be too.