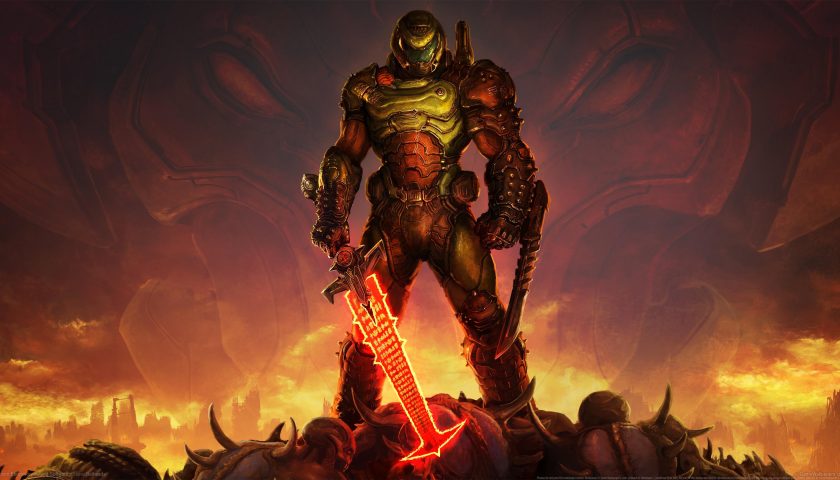 DOOM Eternal, the latest in the beloved franchise, is finally nearing release. With review codes in their possession, both Dylan and Paul feverishly set about diving into what will likely be the biggest bloodbath of the year. Join them as they discuss their thoughts in this Co-op review. It should be noted that Dylan played with an Xbox One S, while Paul played it on an Xbox One X.

DYLAN: I want to start with the negatives first, because there’s so much to unpack in DOOM Eternal, which is perhaps the most gamey videogame to come along this year. While the 2016 outing was something of a straightforward reimagining of the franchise, here we see every extra idea thrown in and given UI space. The problem is that most of the time you are so focused on moving, aiming, weapon switching and so on, that you simply don’t have time to also take in which weapon mod you have equipped (most guns have two), how much fuel you have for your chainsaw, what type of grenade is equipped and so on. This means that most of the visual information given to you on-screen is quite useless. I had a real problem with the chainsaw in particular – even after finishing the game, I cannot tell whether I’ve got fuel for it or which enemies can be cut in half. I experienced a few surprise kills with the chainsaw during my time (the game kind of fast-jolts you to a nearby enemy when you press the button), but couldn’t seem to replicate them again, so I only targeted the lowlife demons as they are guaranteed chainsaw fodder.

My other issue is in the absolute relentless brutality of this game. It is full-on hard, like turn it down-to-easy-difficulty-unless-you-plan-to-perfect-this-game-and-only-this-game-for-the-next-two-months hard. I managed to get through DOOM on middle difficulty feeling pretty badass, but DOOM Eternal is just ridiculous, both in the amount and combination of enemies it throws at you. You need to learn how to replenish health and ammo constantly or you will perish in mere moments. The good news is that as you grow your arsenal and get used to crowd management, a certain level of player skill develops. However, it just does not let up, and later, when enemies that require counter-attack timing to defeat appeared, I found them almost impossible to manage. I died a lot and almost gave up on getting through certain sections. Only persistence and luck saw me past these annoying, hyper-aggressive, virtually indestructible demons.

And that pacing. Dear God. I actually laughed out loud several times as I went from one exhausting, ten-minute arena fight against a hundred demons, only to literally walk around a corner and enter into another one. And another after that. Then another. And another. And then another one. And one more. And – see what I mean? Playing DOOM Eternal feels like being strapped into a chair and blasted with every Meshuggah album at excoriating volume, on repeat, for twenty hours. Now, I know some of you will think that sounds great, and I can admire the sheer generosity on display here, but I feel like some refinement and editing would have benefited the end experience. Then again, perhaps I’m just not hardcore enough for this kind of DOOM. It is clearly targeted to the hard games crowd.

PAUL: I have to say, that whilst yes, we can all agree that hardcore, unrelenting difficulty has a target audience, and DOOM Eternal felt like one of those games earlier on, but once I got into the flow of combat, probably by about the games third mission, I was quickly felt myself becoming the DOOM Slayer that we all gush over. Id Software has thought so deeply about the various demons, their strengths, and their weaknesses, and made each combat arena a dance of sorts, forcing you to rapidly toggle between weapons, exploiting their respective weaknesses, and sending them to oblivion. When you’re full flight, and have momentum on your side it’s a thing of excessively-bloody beauty, but the process of getting your sea legs can be brutal early days. I have certainly died more than I did in the 2016 release, but I don’t feel robbed at all, I just needed to hone my combat craft.

One thing that is a bit of an issue is the chainsaw, and the fact that it needs time to charge, or for you to collect the very few petrol tanks to keep it functioning. It’s a get out of jail card in a pinch, and I would argue that it takes a touch too long to be available to you again after initial use. That all said, it’s not the only tool you can use to keep your health up. I dedicated many of my runes to abilities that would result in health orbs being dropped, so a well-timed Blood Punch would fill the gaps that the chainsaw could not.

The arsenal is vintage DOOM but the mods that you can equip, which can then each be upgraded, made the combat consistently evolve with each new upgrade you acquire. Of course certain upgrades – like the Combat Shotgun’s grenade launcher – give you new tools to exploit enemy weaknesses as well. With each upgrade you unlock, your toolkit becomes equal parts more varied, as well as more potent.

Structurally the game is quite different from what has come before it. DOOM 2016, just like previous entries, presented more bite-sized levels that could be knocked out in 10-15 minute (or less!) bursts, while I don’t think I’ve completed a mission in Eternal, save for the opening one, in anything less than 30. There’s a lot of meat on the bone here, and whilst I’ve enjoyed all that the game has thrown at me, I can see how some gamers might be looking for snappier missions, more suitable for shorter sessions. Thoughts on the mission (and game) length?

DYLAN: It is long. Really long. I don’t think any of the vast, intricate levels took me less than an hour. Players can expect to double that if they play in harder difficulty as each arena fight will test you to your limits. You will die a lot. And there are so many battles, so so many. I said, “Oh, come on!” out loud after defeating a boss, only to stroll into a lock-down fight with two more of that same boss, plus all the other enemy types.  Playing DOOM Eternal starts out like a decent, simple batter with common ingredients, and then they just keep throwing more things in there, until the bowl is spilling over into the floor and you’re thinking, “Hang on, I’ve gotta try and cook this!”

However, I cannot deny the craft on display here. It runs silky smooth on my One S, even when gunplay is at its most intense. The art design is also sublime, both epic and beautiful in scope, each level feels like a new environment. The DOOM 3-like corridors combine with oozing, growing demon biology to tickle nostalgia for multiple DOOM titles. The architecture of later levels is epic, with climbable walls replaced with gold plating. Which brings me to the other leg of this beast, Paul. How did you find the platforming and exploration?

PAUL: Each level has been meticulously planned, from enemy spawning points, to what actually spawns. Then there’s the map design, which presents some truly epic arena battles, heated encounters in tight corridors and wonderful platforming opportunities. Those opportunities involve a lot of dashing and swinging, but putting them together with the multiple jet pads, portals, and a combination of your equipped mods and runes is nothing short of exhilarating. When it all comes together, and that’s a big if, because it can become disorienting at times amongst all the chaos, it will leave you out of breath, heart slowly falling from your throat. DOOM Eternal continually increases the stakes and ups the ante. Just when you feel like it’s exhausted its potential, a new demonic monstrosity emerges to add another layer to the combat, requiring you to again explore every bit of potential within each environment.

I’ve never felt overly compelled to explore every corner in past games, the trinkets and collectibles haven’t done much for me, but Eternal places a heightened emphasis on narrative in this entry compared to prior attempts, and there was enough pull to see what each corner held, whether it was simply ammo, some pieces of lore or even one of those high-end challenges. The balance of those is superb, and their placement equally so, ensure they don’t distract you whilst in combat but also serve as a handy reward for exploration after the fact.

Now we’ve not touched on one of the best parts of recent DOOM entries, the Mick Gordon soundtrack. I’m not sure that this one is quite as epic as the first game, but that might just be because it’s not as foreign as it was before – what did you think?

DYLAN: My wife was in the room while I played and she asked me to turn the sound down because it was incredibly annoying, so I think he has succeeded in ramping up the feeling of alien unease during fights. I do like the way the music reacts to what is going on, often falling to near silence whenever you are exploring the short platforming sections, then building to an electro-metal cacophony when the intensity ramps up.

Overall, I don’t think that DOOM Eternal speaks to me as much as DOOM 2016 did. It feels much more directed at the “hard games” crowd, and while I can admire the depth on offer, I don’t see myself playing this much past this review. It sounds like you were much more graceful than I. My playtime much more resembled a terrified chicken mere moments away from beheading.

PAUL: I on the other hand, as someone who was already quite fond of DOOM 2016, have been impressed even more so by Eternal. Momentum is your friend, strategy is what keeps you honest, while the arsenal and platforming are the tools that facilitate what is some of the most gripping, pulse-pounding, exciting gameplay you’re likely to experience in any genre.