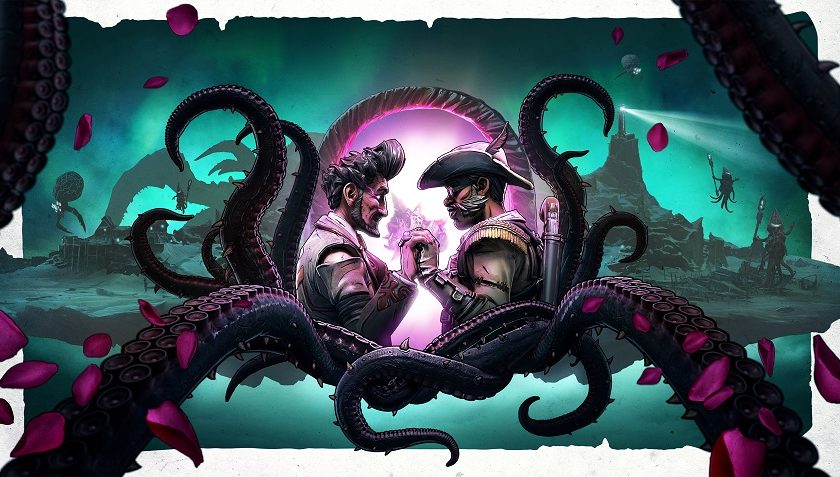 Guns, Love and Tentacles are Coming to the Borderlands

Fans of Borderlands 3 have a lot to look forward to in the next few months, with the game launching on Steam, the release of the second campaign DLC, upgrades to the base game and seasonal events and lastly, the launch of the second Takedown event.

First up, coming off the back of the Epic Game Store exclusivity deal is the release of Borderlands 3 on Steam.  Fortunately, whether you are playing through the Epic Games Launcher or through Steam, you will still be able to add people to your friend’s list and cross-play with anyone no matter which launcher they are using.  While it won’t be available at launch, Gearbox is also planning to roll out additional features, like mailing weapons to other players between platforms.

Following on from the release of the Steam version, it is time to rejoice and embrace your love of bullets, tentacles and….well, love, with the pending nuptials of Jakob Wainwright and Sir Alistair Hammerlock.  With a magical location under the carcass of a gigantic, thankfully dead, Vault Monster on an ice planet filled with vicious wildlife band a creepy cult, this will be a wedding for the ages, and it will all be planned to perfection by the most badass wedding planner in the whole galaxy: former Vault Hunter Gaige and her BFF Deathtrap.

Once you have enjoyed the celebrations from the union of Jakobs and Hammerlock players can also look forward to some quality of life changes and even more content with April bringing a new seasonal event.  It seems Maurice, that rascally Sauron who had Vault Hunters busting ghosts in the Bloody Harvest event has run afoul of the Cartel, and since the best defence is a strong offence, it is up to the Vault Hunter to hunt down and take out Cartel operatives so that Maurice can open a portal into their base, which will have different enemies depending on which section of the cartel you are up against.

April will also see some quality of life improvements to Mayhem Mode, with the introduction of Mayhem Mode 2.0.  While Gearbox has not given out many details about what this change will entail they have stated it will include new modifiers and the ability to change which Mayhem Mode you are currently in from your Echo.  No more jumping back to Sanctuary III if you find you have bitten off a bit more than your Vault Hunter can handle.

Lastly, those Vault Hunters who enjoyed taking down the Maliwan Blacksite can look forward to testing themselves once again in the new Guardian Takedown, which will provide some of the most challenging content released thus far, as you take on the mysterious Eridians.  Completing the Takedown will earn Vault Hunter’s new gear and cosmetics, and for those who really want a challenge, the True Takedown Mode will set the difficulty for a party of four high-level Vault Hunters even if you are taking it on solo, for those that just like to punish themselves.

So a lot is coming from Gearbox in the next few months to keep players occupied, and still, two more campaign add-ons that have yet to be detailed, although at their PAX East presentation they did give a sneak peek at some concept art from the third add-on.  If you like outlaws and dinosaurs then I think you will enjoy what they are cooking up next. Hopefully, we won’t have to wait too long for more info because I for one am very intrigued and can’t wait to bring it to you once we know more.