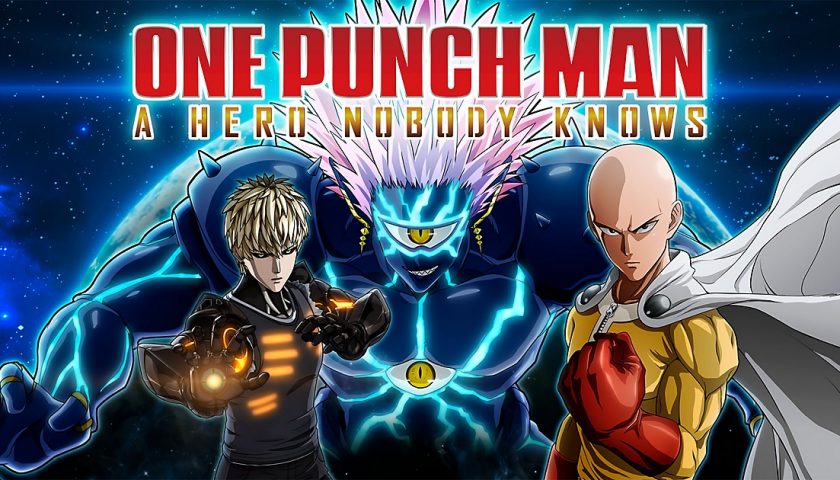 One Punch Man: A Hero Nobody Knows – Grinding to the Punch

How do you make a fighting game where the main character is a guy who wins every fight with only one single punch?  This was the somewhat rhetorical question I asked when our fearless leader Hewso put out the call to review One Punch Man.  I was indeed partially curious about that fact, but I was also curious about the One Punch Man anime itself. Going into this review I knew next to nothing about the characters or the world they inhabit and was looking forward to engaging in the story.  What I got was the journey of a Hero who would be a part of the story, but always in a way that left me feeling like a helpless bystander, one who needed Saitama to come in and rescue me from threats I had no business facing.

I soon realised the answer to my question as I was asked to design my own new hero in what was a rather bare-bones character creator.  I was presented with more options for my new hero’s voice than options in shirts and pants. So, with my new “C” class hero rocking jeans and a tank top, I set out with the goal of stopping crime, fighting monsters and working my way up to becoming an “S” class hero.  In reality, this results in your hero fighting the same characters over and over again to unlock the next hero class or main story mission.

While fighting to build up your hero class you will also need to boost your experience level.  Like most games, your character will earn experience from completing battles and side quests (which are not much more than fetch quests with some fights sprinkled in), and as you level up you can upgrade the stats of your hero.  Completing Hero Association Branch missions and side quests will unlock more content in the main story, but it becomes a bit of a slog when you are fighting characters that are all very similar to each other. To try and mix it up a bit the game does throw in random events, such as meteors falling from the sky or having other heroes join you in a tag-team style fight, but it is not enough to break the monotony of the experience grind.

When you do get to the story missions your created character is inserted into the events of the anime series, taking on tough monsters like Vaccine Man and Carnage Kabuto. While the main story missions see you fighting alongside Saitama, Genos and other heroes from the anime, the majority of them end in the same way, with you taking control of Saitama and finishing off the fight in one single punch.  When you have these moments controlling Saitama it leaves you feeling like this is where your hero is going to end up, but then the mission is over, you will watch a cutscene or two and once again find yourself fighting the same sorts of opponents. The only change to the structure of the game is an increase in the difficulty of your opponents. As I would progress through the mission lists I would grow more powerful, to the point where I was virtually unbeatable by any enemy except the uber-powerful monsters in the main story missions, but it all counted for naught when I made the jump to the next difficulty level. The jump found me being soundly beaten by those same generic characters again and again.  The difficulty spike is compounded by the way you earn experience in battle. Beating characters quickly while taking little damage increases the amount of bonus experience you earn from each battle, making it faster to level up and increase your power levels. However, in the early stages of a new difficulty level, the bonus experience you earn is severely curtailed due to the extra effort it takes to win fights, making it a slog to get back to the point where you can make the most of the bonus experience points.

To throw even more frustration into the mix, there are several different fighting styles that players can master on their journey to being a legendary hero.  While initially limited to just standard fighting techniques, you will unlock new styles and power moves by interacting with other heroes and taking on battles with them.  Each hero you will meet has a social meter that fills through interactions and completing side quests. Once you fill their respective social meter you gain access to that character’s ultimate move to really unleash some damage on your opponents.  The catch is though, to make use of this move you need to have levelled up that particular fighting style. Unfortunately, you cannot mix and match styles and each new style has to be levelled up individually, again making your hero feel weaker just because you decide to try something new.  It got to the point where I just stuck with the power move set because I had maxed it out and unlocked an ultimate move that did tonnes of damage.

However, all is not doom and gloom with One Punch Man.  In a move that left me somewhat surprised, the game has been developed with the cast of the English dub of the anime.  As I noted in previous anime based games reviews, trying to read the subtitles in the middle of battle can be a bit frustrating, so it is good to have the English dub for the non-Japanese speaking audiences.  I take it as a sign that the developers of these types of games recognise that there is a market for these games in western audiences who have experienced the anime dub only, and so have that as their expectation going into these games.

When I have reviewed other games based on anime, like My Hero Academia: One’s Justice and Attack on Titan 2: Final Battle, I was drawn into the worlds the games were based on, experiencing the events of the shows alongside the main characters.

One Punch Man doesn’t take that approach though, instead, it just has you doing almost random missions until you reach a designated point where the game decides to let you experience the next part of the story.  The moments in between, as I fought battle after battle, left me feeling as indifferent and emotionless as Saitama himself, hoping for something more but never really finding what I was looking for. If you are a fan of One Punch Man there is fun to be had utilising the fighting styles of the different heroes and fighting alongside them.  For people who are not already fans of the show, One Punch Man: A Hero Nobody Knows will likely provide more grind than enjoyment.

One Punch Man: A Hero Nobody Knows was reviewed on a PS4 with code kindly supplied by Bandai Namco Australia