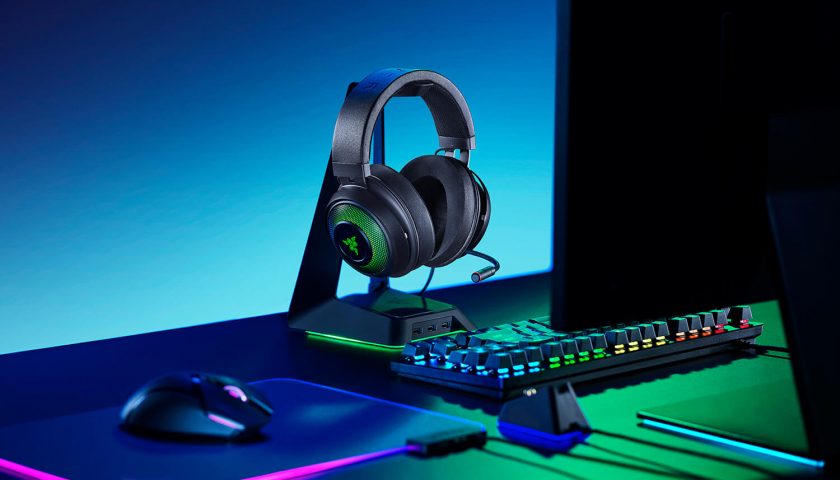 It was only 14 months ago that I sat here and was writing about the Razer Kraken TE. I spoke of how it was the best sounding, and most comfortable headset that I’d have the privilege to wear, yet somehow, Razer have attempted to better their own previous efforts thanks to the launch of the Kraken Ultimate, a new USB powered model that aims to take the accomplishments of the TE and leave them in the dust. The question becomes, does the Ultimate, now with more limited compatibility, still lift the bar higher?

The thing that impressed the most from the TE was the incredible comfort of the headset. The cans were a wonderfully large, circular shape that completely covered the ear, yet the device itself wasn’t so big and cumbersome that it weighed down on your head and neck. That fantastic concept underpins the core design of the Kraken Ultimate. As far as shape and aesthetics are concerned, the headphones are made from identical DNA, with the Ultimate being the beneficiary of numerous technological refinements and a more narrowed focus, as it’s a far more powerful beast than its predecessors.

Many of the key features of previous Kraken models are present again here, from the THX Spatial Audio, the cooling gel cushions and more make this new model feel instantly familiar to those who’ve owned or used previous models. Noticeably the indentations in the cushions to allow glasses users a more comfortable fit seems to have been left by the wayside, while the decision to go USB exclusively might rub some the wrong way. For a headset to be pitched at gamers, but then really only serve those at a PC or those in possession of several USB extender cables is not a move I personally had wanted, but it has been offset with improved frequency response, larger cans, a bit more power that can only be provided by the USB power and Chroma support.

Yes, like a growing number of other items in the Razer portfolio, the Kraken Ultimate boasts RGB lighting, which is, in contrast to their other products, quite subtle. The retractable microphone has undergone some improvements too in the last couple of years with the Ultimate boasting some fantastic noise-cancelling technology which has made for incredibly clear recordings, and while the cans themselves don’t boast an equivalent technology, their sheer size and comprehensive ear coverage mean that very little will be escaping that way.

At almost $220 you’re paying a bit more for some fairly subtle improvements and flashy lights. It’s a great headset, there’s no doubt about that, but it might leave some users wondering if the hoops you need to leap through to make it work, no matter the platform you play on is worth it or not. What USB provides with one hand, it also takes with the other. It’s a great problem to have though, with several other products in the Razer range, like the TE providing to players of all creeds. The Ultimate appears to have a single audience in mind though, and for that audience, you might struggle to find a better headset anywhere than this.