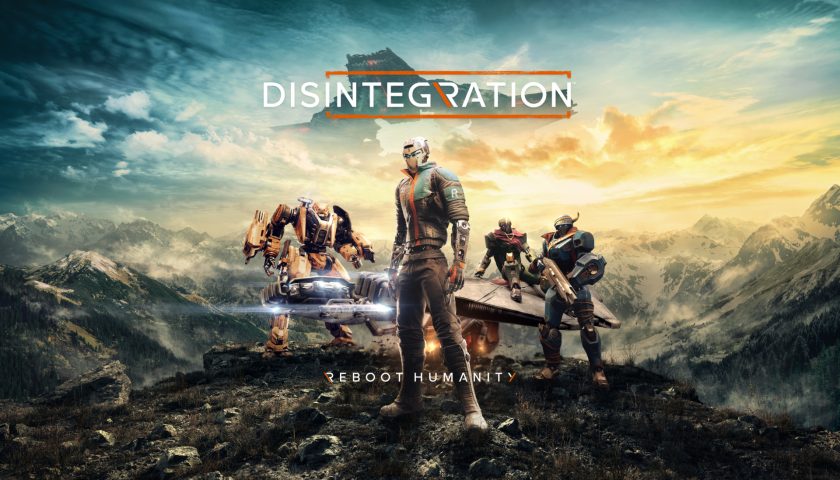 It’s a strange time in the world for everyone, and it’s a strange time in the world for game players and developers. It’s a good thing though that our beautiful form of escapism still exists because the creative opportunities ahead of us are countless. Disintegration is one of those wonderful escapist titles that while still in development at V1 Interactive, aims to give us something out of this world (and in fact this century) for us to look forward to, distancing us from our current ugly reality. Though the current situation makes life tougher, I was recently fortunate enough to see a hands-off demo of Disintegration and receive a presentation from V1 Interactive founder (and co-creator of Halo: Combat Evolved) Marcus Lehto, with the primary focus of the conversation being on the single-player component.

Set on Earth, approximately 150 years from now, it is fair to say that the definition of humanity has changed somewhat. Many of the things we experience today, global warming, extreme fluctuations in weather and other human interference has led to a collapse of sorts (and near extinction). But us humans are a stubborn sort, and when faced with the end of days we decide to laugh in Death’s face and engage in the act of “Integration”, a process that sees the removal of the human brain, only for it to then be placed inside a robot. The process of Integration changes things though, some aspire to one day resume a normal life as a human, by creating a clone. Others are aspiring to something more, and this conflict between the two mindsets sets the stage for the drama to come. One particularly agitated Integrated fellow, referred to as Black Shuck, has formed an army of like-minded peers called the Rayonne, to wage a civil war against all who disagree with their diabolical cause. The Rayonne use giant “Iron Clouds” as their bases of operations; these impressive sky-bound monstrosities float around the world looking for “naturals” that can be Integrated and then join the cause.

Players assume the role of Romer Shoal, an ex-celebrity GravCycle pilot (a futuristic comparison to Top Gear was drawn). Desperate to retain his fame in a rapidly changing world Romer temporarily partnered with Black Shuck before realising the dire consequences of his misguided decision. Disintegration’s campaign begins with Romer escaping from the Iron Cloud before meeting with other Integrated like himself who have also broken away from Rayonne hivemind. These like-minded Integrated are fighting for survival on a daily basis, and are regularly hunted by the Rayonne, but with Romer coming along for the ride the group has been inspired and somewhat forced to fight back.

The inclusion of Romer’s GravCycle is an important piece of the gameplay puzzle for V1 but also for the player’s combat experience. Being in a perpetual state of flight gives players an extra axis to manipulate in combat as you head left/right, forward/back and of course up and down. The GravCycle, of course, gives Romer a host of other abilities and means that wouldn’t be available to your standard FPS protagonist, but while you’re soaring the skies unleashing hell from above, you’re also overseeing the movements of (up to) three ground-based, AI-controlled, party members. Each of those party members possesses their own unique additional perks that can be taken advantage of, such as the ability to toss out a slow field which halts the advances of pressing Rayonne attackers. There were several other abilities discussed and demonstrated including the use of concussion grenades and mortar strikes. Time is slowed while the player issues ability commands to their AI partners, allowing you to stack abilities and play more strategically, without losing your life in the process. Your allies do ultimately work independently of your commands as well, but their status needs to be regularly monitored. You might ask direct them to bunker down behind nearby cover, but your plans need adjusting when suddenly that is destroyed and your teammates scatter or head for a new form of protection. Allies can be taken down, and similar to a Borderlands style “Fight For Your Life” segment, you have a limited amount of time to revive them or risk failing the mission.

The missions themselves that were on show during the demo and in the presentation were fairly stock-standard advance or defend style missions, with many (MANY) encounters along the way, but it’s the to and fro of combat that will keep players engaged. Likewise, the world itself will look and feel quite familiar to those well versed in Destiny with broken-down cities, open canyons and even underground labyrinths serving as key locations for many of the game’s levels. Across an 8-10 hour campaign I’m hoping to see a few more points of difference in terms of the level and scenario design, but as far as the systems that underpin the game are concerned, Disintegration seems primed and ready to give FPS players something very new to try their hands at.

There’s promise in what was shown, and with significant data having been collected from the multiplayer stress test held a few months ago, there’s reason to hope that the multiplayer component will be as promising as what was shown from the single-player component. Embedding tactical elements in with traditional first-person shooting systems, on top of flying controls, and bringing them into a cohesive concoction is quite a challenge, especially for a studio who is aspiring to AAA standards with a large indie sized team. What I’ve seen and heard from this time with Marcus and the game however leaves me confident that Disintegration has something uniquely its own to say, and the potential to execute on those ambitions. With a few more months up its sleeves ahead of launch, it’s a game that should be closely watched.