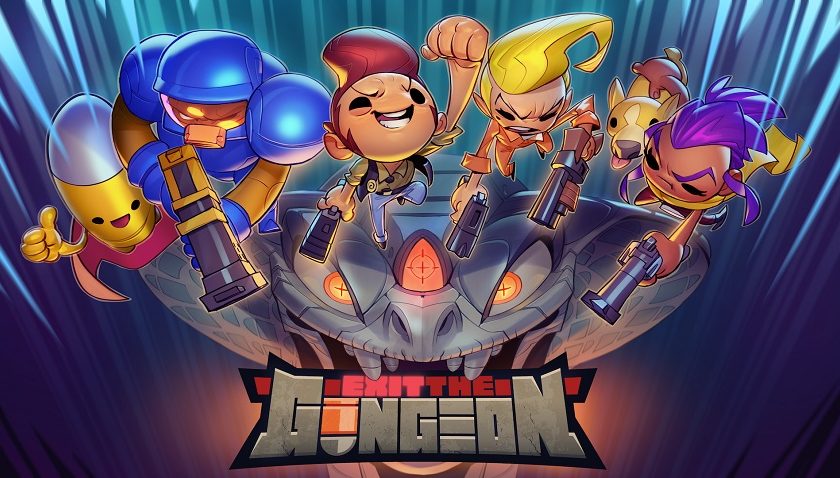 Exit the Gungeon – A Quick Distraction from the Main Game

I loved Enter the Gungeon. It had a brilliant quick-play feel and a quirky array of guns that kept me hooked just to see what else I could discover. Exit the Gungeon is not so much a full sequel, but rather the port of a mobile/tablet arcade title. As such, it is a simpler and more direct spin-off that relies on randomised weaponry and character-specific elevator runs to provide both challenge and variety for players.

Your view is side-on this time, a 2D, multi-level elevator that careens upwards as you shoot spawning enemies that are ripped straight from Enter the Gungeon. Enemy bullets are still your main problem, although you do lose health for physically touching enemies too, which can happen a lot in these tighter quarters. In order to dodge bullets, you can either roll, jump upwards or drop down a level. Having to think about three different movement options, tied to three different button-direction inputs, does complicate the pure dodge-roll of the original and I found myself constantly dodging into bullets or enemies because I didn’t account for gravity or how far my character would roll. I often resorted to just sticking to jumping around like a madman as that seemed to work and at least allowed me to concentrate on aiming and firing at the same time.

These are claustrophobic fights, so the use of blanks becomes essential. Blanks clear the screen of all enemy bullets. Ideally, they should be saved for bosses, but things don’t always go to plan. This is mostly because your weapons are random and your gun changes every ten seconds or so. There are some good guns and some bad guns. Anything that fires quickly, has rebounding bullets and/or explosive properties is a boon. However, there are far too many duds, such as guns that require you to hold down the charge to fire and just weird ones like a bubble gun. I guess there’s some humour in them, but when you’re facing a boss and you’re given a limp dick, there’s every chance you’re going to die holding it. The longer you go without being hit, the higher the number that builds in the top right corner. This is ostensibly tied to a better chance of spawning good guns. I’ve watched several runs online where they get up to 15 or so and still get shit guns, so there is still a high element of randomness to the weapons.

The first elevator ride is the same for all characters, but after that, they have their own path upward, with different quirks to the design of the environment. For instance, one elevator can be moved left or right to negotiate environmental hazards by standing on buttons. This adds yet another layer of difficulty to an already tight challenge. You will die in Exit the Gungeon not through lack of skill, but as a result of such tight conditions, the randomised weaponry and enemy variety that can quickly fill up all available escape space. Blanks help a little, but of course they are limited. I would have liked a continue option or even a few free lives, as the frustration of having to start back over, especially given the random guns, makes persistence far less of an appealing prospect than it was for Enter the Gungeon.