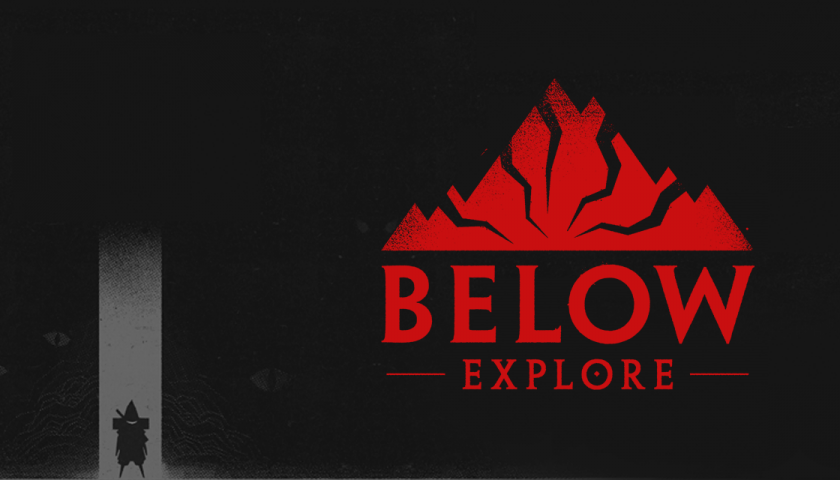 Below: Explore – A Gentler Blow to your Ego

Despite being years in development, Below didn’t really cross my radar when it released back in 2018 on PC and Xbox One – but some quick googling led me to understand exactly why. In its original form, Below was criticised for being ‘unforgiving’ and ‘not holding your hand’, and given I am a person who loves being forgiven and having their handheld, the original version of the game, now called ‘Survival Mode’, was never going to be for me. But with its release on the PS4, the devs have listened and made some major changes, including a new version called ‘Explore’. This new mode has been added to the atmospheric roguelike and promises to make the game more accessible to newcomers, and it’s almost like a whole new game. A very hard, unforgiving game that still doesn’t hold your hand.

From the moment you take control of your character, you’re given very little explanation. Below begins with your intrepid explorer braving some rough seas (in an extremely long cutscene) and washing up on the shores of a foreboding island, where every structure seems to immediately tower over their tiny body. You’re given no backstory, no character information, and no instructions, but it’s clear that things are grim. You’re unsettled, even though you don’t quite know why, and part of this is due to the expertly crafted atmosphere of Below’s world. The art style is instantly captivating, and appropriately moody sound design does a perfect job of letting you know that something is wrong (and will probably only get worse), but that’s all it tells you. It tells you to run, but it doesn’t tell you how.

That sense of foreboding is all the direction that Below will give you. At all. There’s no dialogue, minimal hints showing you where to go, and nothing to teach you how to play. Every new trick you learn you’ll have to work out by yourself, and in a world that seems determined to kill you, you’ll need to learn those tricks quickly. Before long you’ll work out that the only thing to do on this island is to go down, both because you have no choice and because the game’s biggest clue to the plot and the goal you should be chasing is in its title. Go Below, and try not to die. Face hellish beasts, tricky traps, and eventually environmental puzzles as you make your way further down. By pressing the buttons to explore your controls, you’ll eventually find that you have an inventory, and from that inventory, you can craft items, but you’ll have no guidance as to which items you should combine to make other, better items. The kind that keeps you alive, or acts as ammunition. It’s all trial and error, and in a game that’s designed to be challenging, a certain amount of that can be forgiven, or even welcomed by some.

The problem is, too much is left unexplained. The addition of the Explore mode removed some of the pitfalls of the original game – and it is noticeable. Where once you needed to moderate your hunger and thirst levels, you now just have an overall ‘health’ bar, removing unnecessary complication. While being instantly killed by a particularly savage beast used to be a possibility, the game now focuses on ‘bleed damage’, which can be halted by using fire or bandages. Checkpoints, apparently, would previously disappear after a single-use, but will now stick around until you activate a new one. This is all positive stuff. The problem is, it doesn’t help much if you don’t know that these mechanics exist.

Because the game doesn’t teach you how anything works, it largely relies on previous knowledge of the genre, or your desire to employ trial and error until you find a method that works. But by forcing you to use trial and error to work out how it has made things easier for you, it stops being easy. When you die, you lose all your loot and start back on the beach in the body of a new explorer, and it’s up to you to find your old body to get your belongings back. That’s fine, but there’s a key item that you get at the beginning of the game that allows you to progress through areas, and when you die it stays with your corpse. So you’re left trying to make your way back through the dungeons, without one of the things that kept you alive long enough to make that progress last time, hoping you don’t die before you get it. That’s okay, you might think – the game gives you checkpoints! And yes, that’s true. But they have to be manually activated, and it isn’t great at signposting how to do it, so I completely retraced hours of progress before I realised that I could have been cutting out some of those steps all along. And if you’re someone that loves a challenge, and who is happy to learn from those mistakes and really persevere, then this game will give you everything you want. But if you’re someone relying on the fact that this game is a revamped, easier version of a previously nightmarishly hard game, then you’re still going to struggle.

Ultimately, it’s hard to separate how many of my frustrations with this game are my fault, and how many I can blame on the game itself. It’s possible to learn everything you need to know to make this a smoother experience, but learning it can be tiring – or at least it was for me. By the time I understood how everything worked, I’d run out of stamina and my interest in using that newfound knowledge to continue had considerably waned. There’s no denying that they’ve nailed the atmospheric feel of this game, and every second I spent playing it was appropriately spooky, but it also didn’t give me much of a reason to get to the end beyond the challenge itself. If you’re someone who can revel in the challenge, who can savor it and use it to fuel you towards the conclusion, then you’ll find a lot to enjoy here. If you can’t find that, then I think you’ll struggle. I did. There’s an ending to be found at the bottom of this deep descent, but if the journey itself doesn’t thrill you, then I can’t say it’s worth it. The real prize is the millions of deaths you experienced along the way, or however the saying goes.

Below: Explore was reviewed on the PS4 with code kindly supplied by the developer