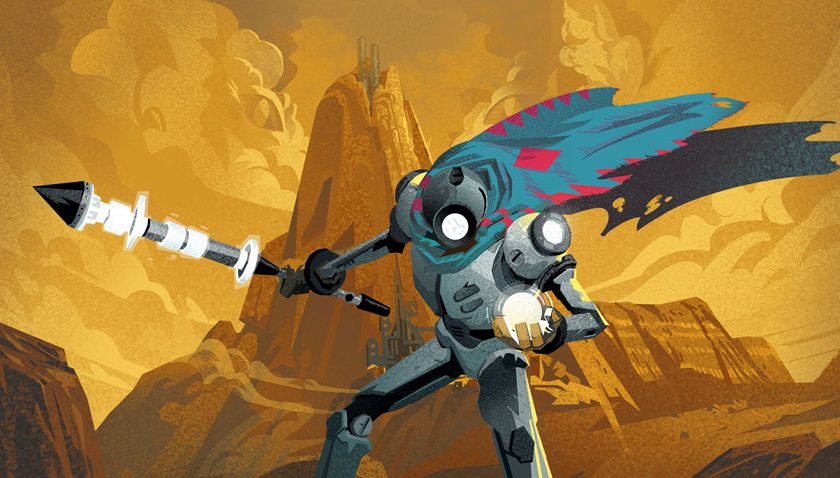 Flight School Studio’s Creature in the Well is certainly one of the more inspired genre mash-ups I’ve played in recent memory, taking elements from puzzle games, pinball machines and top-down hack ‘n slash dungeon crawlers to create a taut experience that challenges without ever straying too far into the realms of the obtuse or frustrating.

Set in the scientific facility of Mirage, a city located within the eye of a terrible sandstorm, players take on the role of a battered BOT-C droid tasked with defeating the titular ‘Creature’ who has spent years preventing the equipment in the facility from functioning properly and stabilising the weather patterns surrounding it. With few NPC’s to interact with, the sparse nature of the storytelling maintains an air of mystery around the entire endeavour, further served by Creature in the Well’s short runtime, clocking between 5-6 hours depending on player skill.

Diving through the seven floors of the facility, Creature in the Well takes many of its cues from pinball games and puzzlers as BOT-C has two main actions – charging energy orbs and firing them at the various machinery scattered about each room to provide them with power which gives the player varying amounts of a pseudo ‘electrical currency’ used to unlock further rooms. While simple to understand at first, later areas and increasingly complex layouts require precise timing and a willingness to experiment with ricocheting energy orbs as, like a pinball machine, it is oftentimes necessary to use the confines of the room itself to line up a particular shot or sequence. Each floor of the facility culminates in a ‘gauntlet’ battle with the Creature during which a number of ‘rooms’ must be beaten in sequence. These tend to serve as tests of mechanical understanding of the game world as much as skill, most notably the last two areas which killed me time and again until I realised I wasn’t taking advantage of everything available to me in each encounter. Akin to a great puzzle game, there are moments in Creature in the Well where the solution to a particular problem ‘clicks’ and from there on out it’s simply a matter of execution.

Across each floor of the facility, particular rooms will hide secret areas which offer gear upgrades for BOT-C, some of which bestow added effects such as a healing effect when absorbing certain energy orbs or providing a ‘laser sight’ to assist with precise aiming. These light-RPG elements not only help to increase the longevity of Creature in the Well but also make certain rooms or ‘gauntlet’ encounters much easier than they otherwise would be with basic gear by offsetting the skill requirements. It’s also refreshing to see a unique approach to ‘gatekeeping’ throughout Creature in the Well, as many rooms don’t need to be ‘solved’ in order to progress provided the player has previously collected enough ‘electrical currency’ to open a door, some of which can be obtained by playing particular rooms over and again.

Nothing in Creature in the Well outstays its welcome and I was quite happy to see the credits roll, although some ‘post-game’ content and further lore reveals regarding the ‘Creature’ would have increased the level of replayability greatly and given me more satisfaction in regards to the minimalist narrative. A unique combination of genre elements and ideas, Creature in the Well is a brief but thoroughly enjoyable way to spend a weekend.