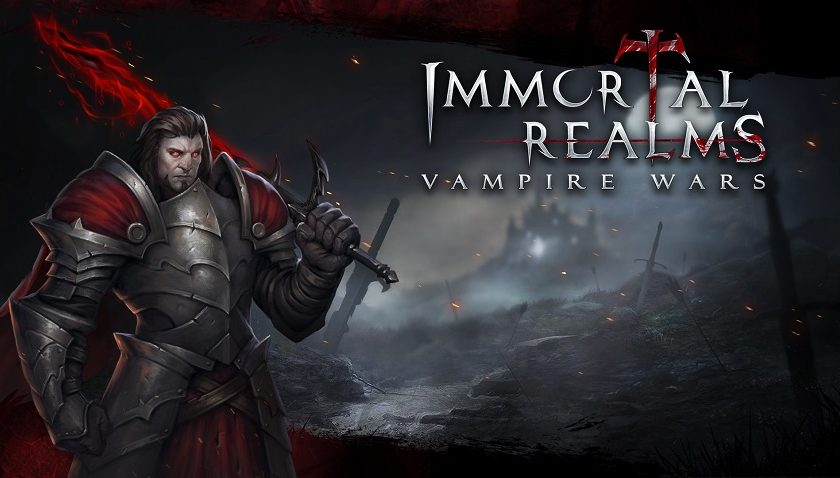 Immortal Realms: Vampire Wars puts you in control of the armies of the undead in a turn-based strategy game that has you waging war on humans that have forgotten their place in the food chain and dared to rise up against you.  Led by your Vampire Lords, send forth your armies to claim their land, their lives, and their blood, as you crush this uprising and remind them that they are nothing compared to the forces of darkness you wield.

Vampire Wars, developed by Palindrome Interactive has recently been made available through the Xbox Game Preview after being released on Steam in October last year, so I spent some time with it to see how a genre that is traditionally  PC based handled the transition over to console gaming.  While I found a game that is enjoyable and engaging, several issues stuck out enough to hamper my enjoyment of the game, and one specifically that almost broke me entirely.

Vampire Wars has an interesting take on the traditional turn-based strategy games.  Rather than having everything occur on the one map, the game is broken up into two very distinct parts.  The Kingdom section is where players will spend the majority of their time, building up their armies and claiming territory as they progress through the map.  Unlike other strategy games, you don’t build up a base to operate out of, instead starting with a Keep, a village, and some other inconsequential territory.  As your armies move through the map they can claim provinces in the name of your vampire line, and this is the key to maximising the offensive abilities of your armies.  Because you are not constructing buildings to train up units you will instead gain access to recruitment by claiming certain provinces.  For example, the classic giant vampire bats are recruited from a cave province while wolves are recruited through a forest province.  It puts an interesting twist on the construction of armies and forces you to start expanding your territory right from the start of a level, rather than consolidating and building up resources until you have an unstoppable army.

In keeping with the vampire motif, everything has a blood cost.  Whether it is recruiting new units, upgrading buildings, or purchasing personal gear for your Lord, it is all done with blood that is taken from your controlled provinces.  Villages and cities will provide you with a blood tax every turn, and this can be upgraded by expanding the cities and villages to hold greater populations.  However, if you are running a bit short of blood you can also feed on these cities and villages, decimating the population for a significant injection of blood funds.  This sacrifices the amount you would get in subsequent turns until the population has grown back to its previous size, but if you are in a pinch and need more units it can help you get back to combat effectiveness that much quicker.  As with all strategy games, making sure you have enough blood coming in to cover the upkeep of your forces while also leaving you enough to upgrade buildings and recruit units as you need is the key to a successful campaign.

Adding to the general resource procurement and recruiting are single-use cards that can benefit the player in several different ways.  You can gain an instant influx of blood points to help boost your funds, discounts on building upgrades, recruitment costs, or you can heal armies or regenerate the mana of Vampire Lords.  Some cards will allow you to recruit basic units from villages, reducing their population for an instant injection of soldiers into your army, allowing you to gain more units without having to backtrack to a keep or other unit generating tile.  Holding Ritual Stone provinces will also increase the effectiveness of certain cards, for example, turning a card that heals your army for only 60% of their health into a card that will heal your army completely.  If you have just come out of a battle with an enemy army and another is closing in on you, having a card like this to heal all of your units is a godsend.

Where the Kingdom mode struggles are in adapting to using a controller instead of a keyboard and mouse.  Where traditionally you would be able to access different menus with a press of a designated key when using the controller you have to make sure you hit the buttons in the right order to get the function you want.  While not a huge issue, when you first start playing you will spend a lot of time accidentally accessing the wrong function or trying to remember just how you are supposed to bring up certain menus.  It is not the most fluid user interface but when porting these types of games to consoles it is an issue that has to be looked at to minimise player frustration and keep the gameplay flowing.

The second part of the game is the battle portion, where your armies will face off with the enemy forces.  There does only seem to be a handful of layouts on which the battles are conducted, but these maps provide for both chokepoints and flanking opportunities combined with power-up squares that will give aid to units on those tiles.  This works both ways though, with enemy units able to take advantage of these power-up tiles as well.  What took away the enjoyment of this section was the lack of clear information on which units are strong or weak against other particular units.  While you would get an indication of how much damage your unit would do in an attack there was nothing obvious that guides you to use a wolf unit over a spearman.

You also have several abilities at your disposal thanks to your Vampire Lord at the head of the army.  Each ability costs mana to use, but once you have levelled your Lord up, with the right picks you can turn them into a veritable one vampire army, drawing health from the enemies to keep the Lord alive while slowly whittling down the enemy forces.  My go-to strategy became sending my Vampire Lord into the middle of the map and fighting there while the rest of the army took out anyone that came down the sides.  After these units were wiped out my army would then close in on any remaining enemies still standing against mu Vampire Lord.

So what was the point that almost broke me?  The very first mission.  The tutorial does an okay job of giving you the information to successfully play the game.  Some sections were a bit unclear on what I needed to do to complete the next objective, but overall I came out of the tutorial with the knowledge of how to play the game.  The first mission takes 90% of the gameplay and throws it all out of the window.  While I had just learned about recruiting units and building upgrades I was not allowed to do any of that.  Instead, the only way I could recruit new units was through card drops that I received after beating enemies.  The problem was that I was losing units far faster than I was gaining replacement cards for them.  To top it off I kept getting useless cards that gave me a discount on recruitment or building upgrades.

It got to the point where the only unit I had was my Vampire Lord.  They went into battle, valiantly taking out as many units as they could before inevitably succumbing to death.  Respawn, make my way back to the position of the enemy army and do it all again.  It was a war of attrition, one that I would inevitably win, but only because I was able to game the system, not because I earned that win.  I used this method going through four or five armies, saving the recruitment cards for what I assumed would be a big battle at the end of the map.  Fortunately, I only had to fight the last army one time, but it had taken me nearly four hours to get to that point.  Had I not been playing the game on behalf of Player 2, I would have given up and deleted the game long before that point.  Maybe someone with a greater grasp of strategy would not have found themselves in that situation, but as someone who does not play these types of games often it was really off-putting.  Thankfully once I started the second level the game played the way I expected it to, and I had a much more enjoyable time with Vampire Wars.

If you are a fan of strategy games and don’t mind a few twists, and you can make it through that first mission, then you can find Immortal Realms: Vampire Wars on the Xbox Store now.