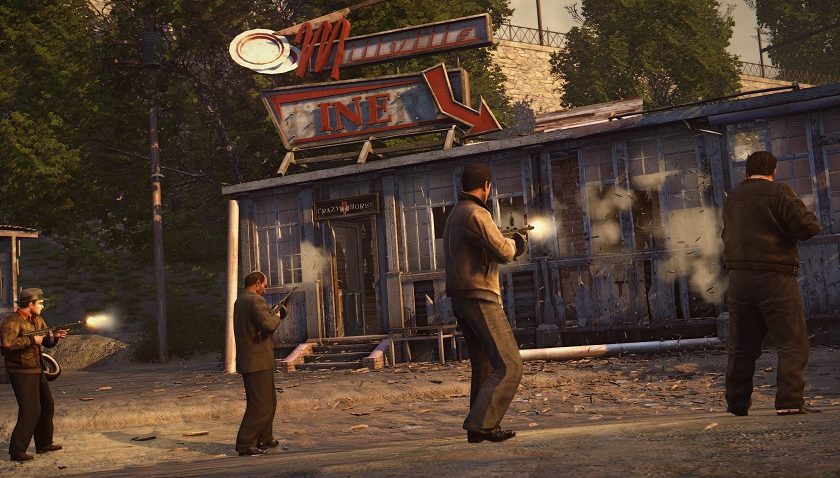 2010 saw the release of one of the best crime tales ever told in video game format. The tale of Vito Scarletta and his rise through the ranks of organised crime in a fictional version of Chicago. The game had a few issues here and there, but they were completely outshone by just how good the story was. It was an enthralling tale and once it had its hooks in you, it practically begged for you to find out just what happens next. Now, 10 years later that same story has made a return, with an upgraded graphics engine and a tonne of DLC in one fancy package. Mafia II: Definitive Edition is here, but the question is, does the story remain just as compelling a decade into the future?

Look, the answer is a resounding yes. I am not going to beat around the bush here. For mine, Mafia II’s story is one of the best pieces of narrative work in gaming history. The story feels familiar for those of us that have seen classic gangster movies like The Godfather or The Untouchables, but there are enough twists and turns on that well-worn road to keep everyone interested. Despite this being a 10-year-old game, I am not going to spoil anything for you. Just know that if you have never played this title, there is a gripping tale of betrayal, duty and suspense that frankly stands head and shoulders above 90% of stories in video games.

The upgraded graphics are wonderful, especially considering this is an upscale and not a full remake. The detail in the characters, Vito especially, is quite impressive. More so than ever you can see the rough times that Vito has lived through, in the scars and emotions on his face. The rest of the game world has also received a significant boost to graphical fidelity and while there is no hiding the fact that this is now an old game, it is probably the best looking old game you are ever likely to see.

The other impressive aspect of this title that holds true over time is the sound and music. All the licenced music from the original release is back and I cannot stress how much these tracks add to the immersion of the game. Driving through these streets while Chuck Berry and Little Richard are playing on the radio transports me to a time period quicker than any text or exposition ever could. The music changes as time rolls on within the game too, a nice little detail that helps to add the feeling of time passing in the story. The voice acting is also, without exception, amazing. So much emotion and gravitas are added to the story through the outstanding performances put in by the voice actors. From start to finish, every single voice is pitch-perfect, an achievement that has only been matched by the best games of the past 10 years.

Now we come to the gameplay and where things may be a little divisive. When it was originally released, open worlds were in their infancy. At the time there was an overwhelming desire for games to have tonnes of stuff to do in their worlds. Mafia II was criticised for its world basically having nothing extra for players to do. There were no side missions, no extra bonus quests, just the city and the story. In the year 2020 however, there is quite a bit of fatigue surround this type of design and Mafia 2’s slower pace and firm commitment to a setting and story feels almost refreshing. Cruising through the streets on the way to each mission serves no purpose other than adding another layer of immersion, but I enjoyed it all the same. In fact, I think it is fair to say that my older, more jaded self, found the experience much more rewarding than I gave it credit for back when it was originally released. Now the quiet moments are just as welcome as when the bullets start flying and the fists are cracking skulls.

Speaking of action, the gunplay is probably the part of the game that is showing its age more than anything else. It isn’t bad as such, It just isn’t as snappy or as satisfying as most action games are in this day and age. Aiming feels a little tougher than it should be, guns feel a little underpowered and the moment-to-moment action just lacks a little pizazz. That all being said, there is nothing here that will put people off. It is, without doubt, a lot of fun to kick down the doors of a whisky distillery and blast the place with a Tommy gun, but there is no hiding that the gunplay is just a little bit on the weathered side of things.

Apart from that there really isn’t a lot to point out as a negative. Perhaps the checkpointing can be a little on the rough side at times and the open-world really is just a city to drive around, but honestly, I am finding myself smiling just thinking about the game. I forgot how much I loved this title and I have to thank 2K and Hanger 13 for putting such a stellar effort into reminding me. If you have never played Mafia 2, it really is a must. If you have played Mafia 2 before, there is no better excuse to dive back in, especially as it is a free upgrade for those that own the original title on Steam. Mafia II is one of the best stories and experiences from gaming’s last decade and you owe it to yourself to become a made man, at least once in your life.