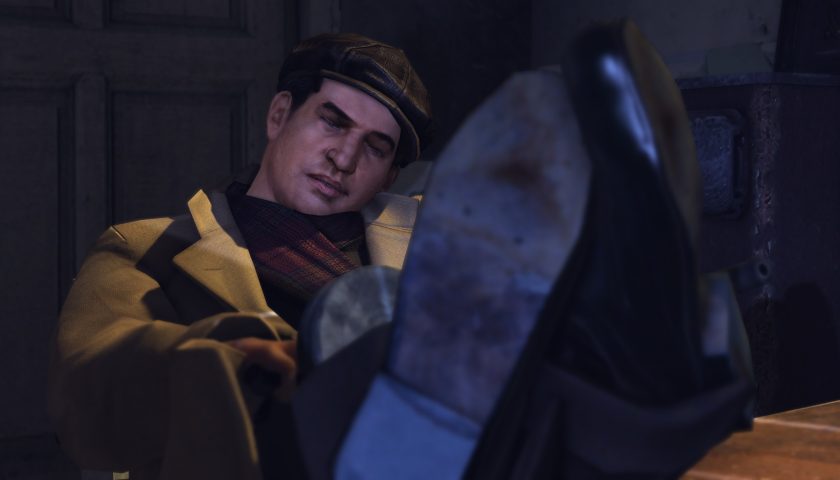 Player 2’s Dylan Burns has decided to examine exactly why Mafia II is worth a revisit, despite often being considered the “black sheep” of the open-world genre.

Forty minutes or so into Mafia II, after a World War 2 prologue and some homecoming mischief with you best worst buddy Joe, the game prompts you to open the map. In 2010, when Mafia II released, it would have been a generously sized game map. However, in 2020, after intervening years of competitively larger maps, densely populated with things to do, Mafia II’s reveal falls flat. Empire Bay feels less like a city and more like just a few blocks from GTA V’s San Andreas, which would release a few years later. At this stage, one might feel that exploring this suburban space might not be worthwhile, but Empire Bay still has something to offer modern players. At the very least, it provides enough of an illusion of depth to make playing through Mafia II’s remaster a satisfying experience.

Mafia II’s introduction takes it slow, bringing you up to speed on all the different actions Vito can perform as well as easing you into the open world tropes of car collecting/stealing, combat and character customisation. During this linear phase, Empire Bay is presented as a lively city existing in a wintery world, complete with footsteps in the snow and car handling that keeps you cautious around each curve.

It feels like the city wants to welcome you at each turn, often without requiring any input from the player. For instance, after pulling up in a cab near to where your family owns an apartment, a nearby paper seller will regale you with his opinions about the state of the world without needing a button press. So too will an old lady exclaim her recognition of you, saying she remembers you from years ago. You then move past a barbershop, its interior lit up nicely, the barber inside giving a customer a buzz cut. Many of Mafia II’s interiors require a short load, but the illusion of depth offered by shopfronts is still impressive.

A short distance away, two men throw snowballs at a friend’s window. His wife yells at them to stop, that there is no way he’s going out on the grog with them, “coming home smelling like booze and some other ding’s perfume.” Elsewhere, through the brick of the apartment walls, an argument takes place between a couple, their voices muffled but the emotion clear. The sounds of a city envelop you – horns honking, trucks rumbling and planes flying low overhead.

The game world reacts to your presence in ways that still satisfy modern standards. Pedestrians will come out with annoyances if you try to hinder their path or bump into them and cars take realistic damage thanks to PhysX physics. There is also the fact that police will go into chase mode if you commit a crime, which extends to speeding. To help with this, you can press the A button while driving to turn on a speed limiter, which can then be turned off as soon as the heat has passed by.

The number of pedestrians ostensibly going about their lives is reasonable and there is a decent variety in their models. Overall, Empire Bay feels like a sparsely populated place that is trying to convince you it is a thriving metropolis. But it gets away with this because of both the time period and the winter setting, which eases you into the idea of a city that is just bubbling beneath the surface.

Empire Bay is noticeably bereft of the plethora of activities often associated with open worlds. At the time of its release, Mafia II’s open-world peers were Red Dead Redemption and Assassin’s Creed: Brotherhood. Throw in Just Cause and you can see that even back then Mafia II’s sparse offering of side activities stood out. Ubisoft, in particular, would be on a path to the point of parody when it comes to filling their maps with icons, so as we sit here in 2020, the concept of open-world fatigue is a very real thing. As such, Mafia II’s focus on story is welcomed, allowing us to experience the game again without feeling the pressure of 100% map completion.

There are still things to do, though. If you choose to explore, you can steal and deliver cars, collect wanted posters and, for some reason, Playboy magazines. This edition also comes with the DLC story packs, which give you extra missions with some of the game’s main characters. It honestly feels like enough.

So You Wanna Be a Wiseguy?

It may seem that a decade-old remaster of an open-world game would be a chore to commit to. However, in the case of Mafia II it is the gripping story and focus on weaving it through the limited open world that makes it still worth a look today. You can play a couple of missions and leave it without feeling like the world requires any more from you. Treat it like an episodic story or binge a whole heap. Either way, the demands on the player are only that you be present for the fisticuffs and shootouts. The city is there as a backdrop, a place you can exist in without subsisting. It will embrace you, but it won’t keep you. And that’s okay because if it were to throw more in it would demand too much. There are other games that do the grind-to-the top thing, such as GTA or the EA Godfather games. And really, who needs more right now than the simulated wholesomeness of cruising the streets in an old Walter Coupe, sticking at 30, listening to wartime tunes?