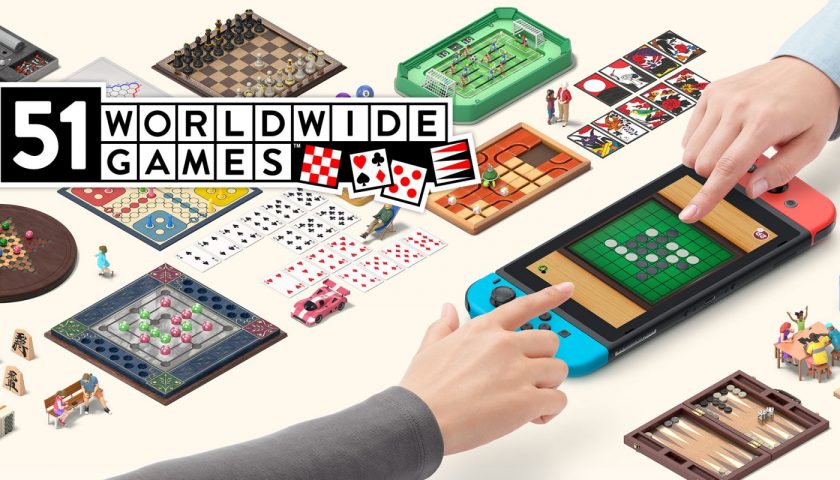 As the name suggests, 51 Worldwide Games packs in all sorts of activities from various cultures across the globe. Depending on your preferences, some games will likely appeal more than others, but the sheer range on display will surely have something for everyone.

Want card games? There’s no shortage of options, including Solitaire, Blackjack and Texas Hold ‘Em Poker. Perhaps you’re more interested in board games such as Chess, Backgammon or Shogi? Plus, there are also several toy tabletop games such as baseball, curling and golf which look utterly adorable.

Devastatingly, in a massive blow to Aussie households everywhere, Test Match did not make the cut.

If you’re anything like me and haven’t played many of the games in 51 Worldwide Games’ package before, plenty of helpful explanations and tutorials are available, plus plenty of fun facts. Personally, I’m keen to use my newfound knowledge of Koi-Koi – thanks, Sakura Wars – and check out Hanafuda.

Additionally, Nintendo’s latest trailer showed off 51 Worldwide Games’ multiplayer options, which includes using the Switch as a virtual board, local communication between up to four consoles, and online play with a Nintendo Switch Online subscription.

Handily, similar to what many Nintendo DS and 3DS games employed, 51 Worldwide Games’ local wireless multiplayer is possible with only one copy of the game. One person must own the full version, while up to three other players can download a free version to play a selection from the 51 Worldwide Games’ library against one another locally.

Also briefly shown is how 51 Worldwide Games adopts Mosaic Mode to align multiple Switch consoles to expand the playing area, similar to what Super Mario Party implemented for some side content. While this looks like a cool way to play with slot cars, it is not yet known whether this feature will require each player to own the full game.

Switch Lite owners beware, as Nintendo Australia indicated in its press release that a Joy-Con pair is required to play 15 of the included games in single-system multiplayer. While it appears much of 51 Worldwide Games is playable via the console’s touch screen, the detachable Joy-Cons of the original console will come in handy.

Above all else, 51 Worldwide Games looks like a highly polished compilation, with each included game offering what appears to be a highly tactile and streamlined experience.

If you’re keen for some tabletop action 51 Worldwide Games is out June 5 on Nintendo Switch, and digital pre-loading is live now.