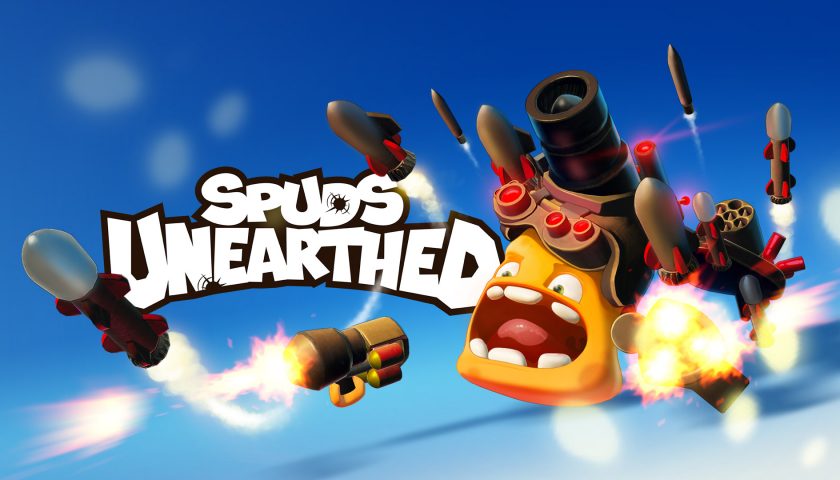 ** Note, the code for this review of Spuds Unearthed provided to Player2 was an EU code.  Unfortunately, the game is not currently available in Australia through the Playstation store, but it is available on Steam. **

The battlefield lies before me.  Forces clash on multiple fronts, both sides taking casualties.  Cannons are blazing, spewing round after round at the enemy troops, trying to clear the way for my forces.  Too late I realise that my right flank has been overrun and I am about to be attacked.  My cannon has overheated and is no good to me.  Only one option remains.  I pick up the little potato creature in front of me and fling him towards the advancing enemy.  He sails through the air until, at the last moment, he pops out a parachute to land square in front of the advancing forces.  He pulls out a bazooka and lays waste to all that dare confront him.

So the story goes that the home planet of the spuds has been destroyed due to their love of having a go at one another.  Because they have lost their connection to the motherland, a large number of spuds have now become crazy Zombuds and have captured their former brethren on numerous planets throughout the galaxy.  After one of the spud heroes finds a pair of A.I. hands (i.e. the player), the journey begins to free captured spuds to help the tribe grow, recruiting more heroes to the cause.

Not that the game tells you any of this.  Instead, I found it on the Steam page for the game.  All I got from the game was a bare-bones tutorial that gave me the vaguest understanding of what was going on and how to play the game.  The first three times that I tried to take on a planet and rescue some spuds I failed.  I tried focussing my cannons on the big red extractors that stood out.  Soon enough my minions had been overrun and the enemy was knocking on my front door.  Once I realised I was better off to just ignore the extractors and let my minions deal with them I made progress, though the lack of aiming reticule meant the best strategy was to just let the enemy get close so I would not waste my shots and have the cannon overheat on me.

The lack of information on what you are doing really baffles me.  There was not only a lack of information on the players’ role in combat, but the game does not explain anything about how you upgrade turrets or how you unlock new hero spuds.  Sure I had a counter telling me how many more spuds I needed to rescue before I could recruit another hero to my tribe, but when that time came I had to figure it out myself.  It was only that I happened to notice a small aura on a certain machine when holding a hero spud that put me on the path to figure it out.  I eventually unlocked him and had him ready to go, but once again there is no information on what the spud can do.  Unlike my bazooka wielding friend I had from the beginning of the game, this guy was sporting a helmet and shield.  What I didn’t know until I threw him into battle for the first time was that he pops up a literal shield and does a ground bash within that radius.  In a game that claims to be an action-strategy, you are given no information that might help you formulate a strategy of your own.

Not that you will really need much in the way of a strategy to beat the levels in the game.  Essentially all of the levels play out in the exact same way, with your minions destroying extractors in the exact same order.  After the destruction of each extractor, you will be faced with a greater number of enemies, but the tactics don’t change at all.  The only exception to this is when you attempt to take on a planet that has already been liberated by another player.  Instead of facing off against Zombuds, instead, you take on the defences that have been left behind, pitching your minions against theirs.  The objective is still exactly the same, but you will have to contend with some tanks and aeroplanes thrown in the mix.  It is a nice little change-up but much like the regular battles, it gets stale very quickly.  When it all comes down to it, you will be doing the same thing after 5 hours of playing as you did in the first hour.

Along with the gameplay issues, the controls can be a bit haphazard as well.  There were numerous times that the hands would not grab the handles to control my cannons, leaving me flailing trying to grab it as the enemies got closer.  This in part is because the cannons are placed so far forward in front of you, to the point that after I reset the perspective on the PSVR I would need to take a step forward from that point for the hands to reach the controls effectively.  You can access an alternate control scheme on the Playstation Move that allows you to adjust the length of your hands, essentially sending them forward to where you want them to be for smooth control, but there seems to be a bug that will always switch the control scheme whenever you load into or out of a battle, no matter which control scheme you had it set to at the time.

Overall while enjoyment can be found in Spuds Unearthed, it is a game that is very much better in small doses than extended playthroughs.  While there are limited environments the ones present are colourful and look cool in VR.  It is just a shame that the lack of information and the lack of evolution to the battles as you progress holds the game back from being truly fun.