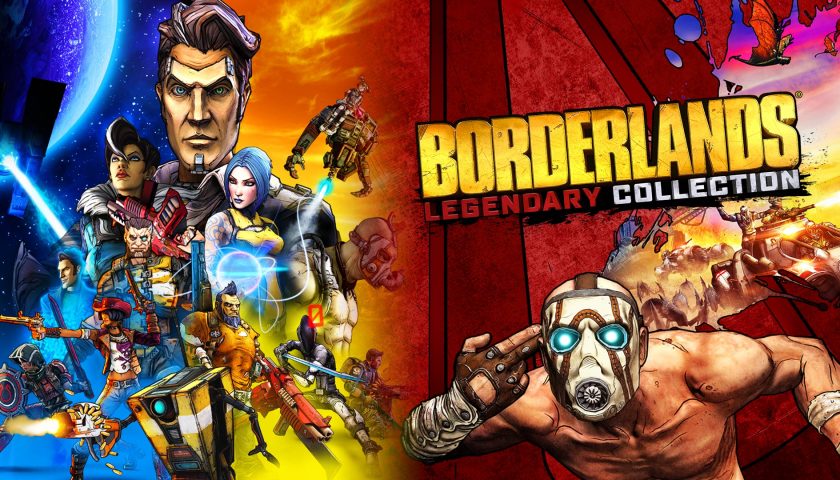 With gajillions of guns, unrelenting wub-wub, and EXPLOSIONS?! the Borderlands franchise has established itself as one of the biggest gaming franchises on the globe. Recently, the first three franchise entries have dropped onto the Nintendo Switch, and we’ve promptly sent both Sarah and Paul marching off into the Borderlands to report on the quality of these switch renditions.

Paul: So Sarah, before we get into the swing of things properly, we should both disclose to the readership which games we were playing. I personally had been diving back into the Handsome Jack Collection which contains Borderlands 2 and The Pre-Sequel. How about you?

Sarah: I was giving myself a bit of a go at Borderlands 1, but did also pick up Borderlands 2 for myself. The sequel was my first entry to the series, so I was very curious about how it stacked up on the Switch as well!

Paul: With that disclosure out of the way, let’s dive into the games themselves. I personally am a long-standing Borderlands fan having played the first few games on the Xbox 360, the PS3 and the PS4, now I’m adding the Switch to the mix, and the first thing that was crystal clear to me is… that it sure is Borderlands! Thankfully, unlike the PS Vita port of Borderlands 2 many years ago, this attempt to bring the franchise to portable platforms has been incredibly successful. There have been very few sacrifices and in fact a number of small additions that give me reason to contend that these ports may, in fact, be the definitive versions of the games.

Sarah: I think that is where people had a little bit of anxiety, due to the previous handheld port. I’m in the same boat as you that I had initially tried to play Borderlands 2 on the Xbox 360 in online mode with friends, before I picked it up as a PS4 remaster and somewhere along the way picked up the original as a curiosity. Since then, my experience has been primarily couch co-op, so this was the first time that I had really delved into playing it solo. The port of the original game is based on the Game of the Year edition that comes with improvements like a mini-map and easy pick up of items (again, to fit in with its younger sibling!). Aside from slightly longer loading times that I anticipated, I genuinely didn’t feel a lot of difference in the Switch port itself. What I think I struggled with most was that some of the mechanics that worked fine with burly Dualshocks were a little more fiddly with the Joy-Con controllers, which was my real barrier to playing it in handheld mode.

Paul: 100% agreed, but it’s an interesting point you make regarding the Joy-Con; in some cases, their relative lack of size is fine, but in the case of Borderlands (and quite possibly every other FPS on the platform), they don’t quite cut the mustard, emphasising the importance of the pro controller if that’s something you have at your disposal. The visual style that Gearbox adopted for the original game, one that has carried through every subsequent title, really holds up on the Switch, presumably it’s less demanding on the hardware than a game that might be adopting a more realistic look. While we’re still somewhat on the topic of controls, what did you make of the motion controls that were added for this port? I for one think they worked really well!

Sarah: I am someone who doesn’t typically enjoy motion controls for the sake of motion controls, and my most recent experience with motion controls was actually in Breath of the Wild of all things! I now realise that my experience in BOTW was quite hybridised – where motion controls were activated while aiming down sight for more precision. It made a lot of contextual sense there. I get why it felt different in Borderlands – sometimes we shoot more from the hip than with precision – but it was really disorientating for me. For a while I just had to turn them off until I felt a bit better with the standard controls in handheld, and then went back to playing around with them again.

While the argument that the Switch handles the Borderlands series with minimal issues may be true, I don’t think we can just put it down to the fact that the art style lends itself to ease of porting. I remember this on last-gen consoles – I remember the load issues and the screen tearing and the angst. I think the Switch ports just made some smart choices about sacrificing texture pop-in for better performance, and on a handheld screen this is quite justifiable (and better achieved than the Vita port).

Now let’s briefly talk about the hilariousness of the pitch, because Gearbox has pulled a Square Enix on us here and put a physical cartridge out on the shelves with hardly anything on it, as most of the collection has to be downloaded. I get why, but it was really odd that they didn’t approach this as a purely digital release.

Paul: Yeah, this is a strange trend given the storage capacity of Switch cartridges, surely there are more elegant solutions than what Gearbox and 2K have gone with here. As we wrap things up, one final question from me. The humour. Borderlands has a very specific self-deprecating, pop-culture reference laced humour, though Borderlands 3 (in my experiences) didn’t quite hit the mark as how I had recalled the prior titles hitting, did your time with the game elicit some smiles and/or laughs?

Sarah: It was certainly great to relive some of those first moments meeting Tiny Tina, and shooting that one guy in the face that desperately wanted to be shot in the face. Borderlands 2 has this great way of appreciating the absurdity of its own situation through its supporting characters, while also having poignant moments of literal uprising and depths of loss. Even The Pre-Sequel cleverly brought Australian humour to the series, while “taking the piss” out of our American acquaintances’ assumptions of Australia being this significantly different world. I agree that it hasn’t really grown as much into Borderlands 3, which is why I think it is really important for more people to experience these original three games. Gearbox was right to make the port and keep the series relevant – it may not be the optimal way to play it, but it is still a great opportunity to enjoy these moments once again!