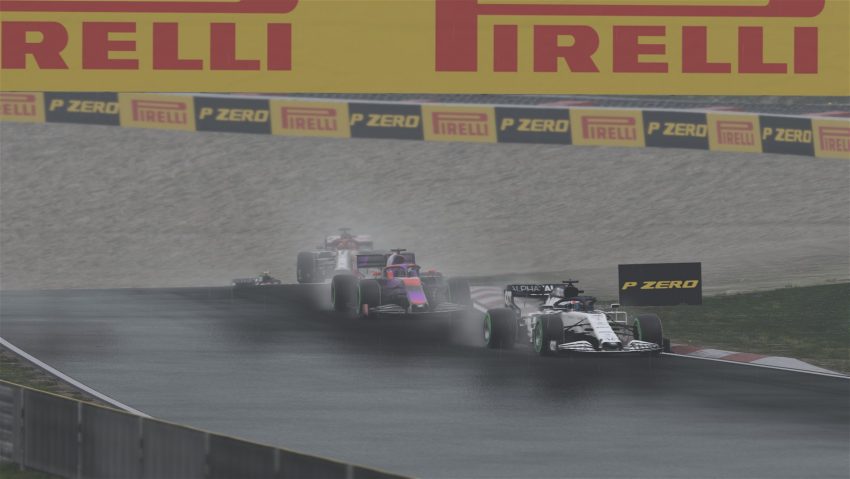 In F1 2020 there’s thankfully no sign of the global pandemic that’s put Formula One’s 70th anniversary season to the wall. Instead of a shortened season of as yet unknown length at the time of writing, we’re treated to the full, record-breaking 22-race long season as it was always intended. Improved tracks, including a couple of excellent new ones in the shape of Zandvoort and Hanoi, all the 2020 teams and drivers including all the second-tier F2 drivers from 2019 (with 2020 coming in a patch due later), some wonderful new accessibility options and a huge new career mode that makes your decisions feel more meaningful than ever before. And despite a couple of niggling issues with the AI, it all comes together to create one of the most accessible and immersive racing experiences available today, improving again on the formula that has seen the series move from strength to strength, year on year.

My Team career mode is the big, new game type where you’re tasked with not only driving the fastest cars in the world, but also keeping the lights on at the factory; building up a brand new team from zero to hero, signing sponsors and a driver teammate, controlling R&D direction and generally making sure the team improves over time. Whereas in the driver career mode–which is also still available but largely unchanged from last year–you felt more focused on myself and less concerned with the overall performance of your team. But My Team changed all of that, and it makes all of the decisions you made about your team’s future feel so much more meaningful than before.

You’ll direct resources into your team to help improve it and the car. Money is earned from sponsors after each race, and you can earn extra for completing certain objectives like finishing a clean race or running a certain number of laps. Money can be reinvested into improving your various facilities at your factory, which can lead to faster build times for car improvements, more effective sponsorship activities, and various other enhancements that will increase car and team performance. Money is also used to sign on new drivers, although don’t expect to be signing on the likes of Lewis Hamilton or Max Verstappen straight away. Your team acclaim and car performance ratings all matter just as much, if not more, than cash alone, so unless you have the car to back it up, you’ll be stuck wooing F2 drivers and other free agents first before approaching any of the series‘ established regulars.

Being some of the fastest and most advanced race cars built by human hands, you could imagine that driving a Formula One car isn’t the simplest thing in the world. But Codemasters have used helpful assists applied over the top of a simulation handling model to try and keep both the casual and the hardcore fans happy, and once again it’s put to supreme effect. This has been expanded further in F1 2020 with a new steering assist that helps nudge the car in the right direction on the racing line, and a new ‘casual’ setting that can be used in any type of game mode that tames off-road surfaces, so even your youngest kids can jump on and race with the confidence that they aren’t going to spin off at every corner.

For folks like me who want to get their simulated racing as close to the real thing as possible, all of these assists and aids can be turned off, and in doing so the handling really comes to life. F1 cars in 2020 are slightly faster than last year’s cars thanks to more downforce and grip, and you can feel this through whatever controller you’re using, but they still slip out at the rear if you get on the power too quickly and slide around when the tyres wear out. The gamepad controls have received a full service, feeling more refined and playable than in previous iterations. Similarly, the wheel controls also feel spot on, so anyone lucky enough to have a decent home set up will feel right at home from the moment they step into the virtual cockpit. The results mean cars that are not only slightly faster than last year’s cars due to enhanced levels of grip, but also feel better to drive than ever before too.

Some other on track enhancements really add to the authentic nature of F1 2020, too. Gone is the constant management of ERS deployment levels, replaced due to feedback from real F1 drivers with a single ‘overtake’ button which unleashes all the power of your hybrid battery to give you a burst of speed like they have in real-life. Using this too much depletes your battery which charges over the course of a race distance, so strategic use of the overtake button is needed not just to make passes on track, but also defend from cars attacking from behind. You’ll also need to manage your car through ‘dirty air’, the wake of air left by the car in front which decreases your overall grip through medium and fast speed corners, meaning overtakes feel so much more earned than in previous years. Where it used to be quite easy to drive up onto the back of a slower car, it now takes some planning and effort to time the move so that you don’t overwork and damage your tyres or lose too much time to the cars behind.

Each of the game’s circuits have undergone a much-needed facelift, and although many of them show numerous small improvements–the small bump in the last corner of Suzuka is finally gone, for instance–they still fall well short of the sort of offerings seen in other racing titles. The new circuits look and feel fantastic, particularly Zandvoort with its newly constructed high banked corners and undulating road surfaces. It is by far the highest quality in terms of track accuracy, matching the feeling and characteristics of other laser-scanned versions of the same track. While the other circuits don’t live up to this level of detail on the drivable track surface, they still look incredible, especially thanks to the fully dynamic weather that can blow in at any time.

For all the right steps forward F1 2020 has taken, there it’s racing AI have lost some of their competitive edge, pulling out of advantageous positions in the heat of battle with annoying regularity. While it’s possible to have some wonderful battles with the AI, they all too often seem eager to back out of a fight, particularly when they’ve got the upper hand. Sometimes they’ll push you all the way to the edge of the track in order to retain position, but other times they’ll simply back out of the throttle despite appearing to be ahead of you mid-corner, backing out the fight in a way you’d never expect a racer to do. They’ve also still got quite an advantage in changeable conditions too, with AI grip on slicks in dry-to-wet conditions being so powerful that it can put you a long way down unless you read the conditions and change to wet tyres at just the perfect time.

If racing AI isn’t your thing, multiplayer again also plays a big part in F1 2020. There’s ranked and unranked lobbies, LAN races for localised competitions, as well as the surprising return of two-player split-screen mode for anyone keen to get their couch play on. It should be said that there have been numerous issues with online modes since release, mostly revolving around issues with connectivity to Codemasters servers. There is one particular issue with the starting lights going out at different times for different players that has caused a few headaches when playing with folks from around the world, however, these are likely niggling issues that will be resolved sooner rather than later, given the trajectory previous F1 games have taken in the past.

F1 2020 represents yet another strong step forward for the series that Codemasters has helmed since 2009. My Team career is easily the series biggest highlight in terms of game modes, offering a far more meaningful experience that will see you more likely to want to keep progressing through all ten possible seasons than any of F1’s career modes before, despite the AI’s overall backward step. The cars are faster than ever and feel better to drive than ever thanks to tighter controls and base improvements to the game’s car handling. Equally, the addition of accessibility features like steering help and the casual modes open up F1 2020 to an even wider degree of players, from those with a casual racing interest to people with full-blown personal racing simulators.