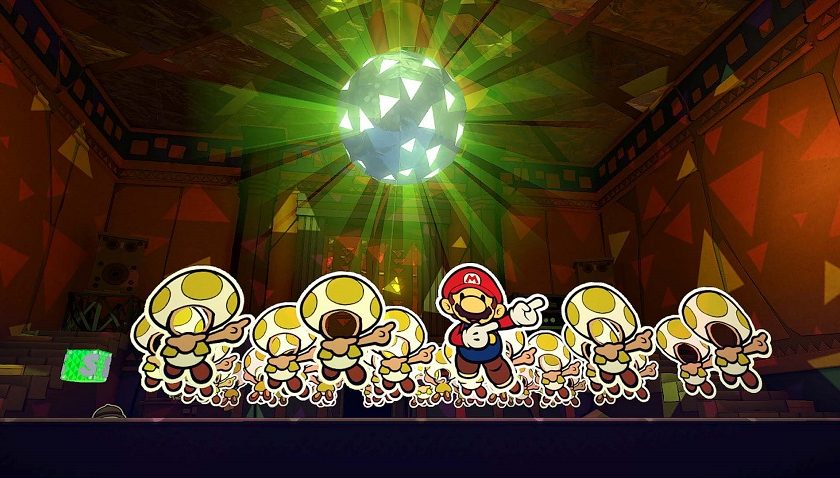 Paper Mario: The Origami King – Enjoyable but not Essential

What I like most about Origami King is the way that each environment is open, multilayered and full of alternate paths that meet up with each other. There’s nothing worse in games than choosing the ‘wrong way’ and missing out on secrets or collectables. Here, your dedicated, deliberate movement through each space provides a mental checking-off of areas as you whack grass, hit holes and bump drawers to uncover one of the hundreds of hidden toads in the world, as well as find treasure chests that contain collectable trophies for you to presumably admire once the adventure is over.

Roaming these areas are lots of enemies ready to do battle with you, comprised of your usual goombas, shy guys, Koopa Troopas and so on. The battle system itself is simple yet difficult to describe. Basically, it’s like a dartboard. The enemies land on it initially and you have half a minute to choose a circle section to rotate and line them all up for easy defeat at the end of either Mario’s boots or hammer. Later on, things get a bit more complex, bringing in the ability to swap between circles or quadrants to manipulate and shuffle enemies about.

There’s usually a correct answer each time, but the time limit often caused me to panic and I had several ‘deer in the headlights’ moments when I just stared at the damn thing while time ran out. Such fumbled battles usually bring you to low health, because defence is limited to timing a press of the A button to reduce incoming damage. And when there are fifteen cheep-cheeps ganging up on you, well, it’s easy to miss-time and pay the price. Luckily, there are usually plenty of items to find, such as mushrooms, which will fill your vitality. You can also rest at any bench in the world and be filled to full health.

Battles, as you explore, are quick affairs, often over with before they’ve really begun. There are lots of them, though, and they are necessary to gain coins. Everything that you want or need costs a lot of coins, so those battles are somewhat necessary. I also discovered that if you willingly spend coins on toads during fights, each 100-coin investment will automatically give you a free correct move of the circle. Still, spending 200-300 each battle to avoid this annoying aspect of battles is something of a zero-sum game.

The battle system breaks apart when you take on bosses. These encounters flip the formula, placing the boss in the middle and you must guide Mario through a path to reach the boss and attack it. I found these encounters annoying and confounding. It wasn’t until I almost failed on two bosses that I discovered you can spend a couple of hundred coins to reveal a critical path for Mario. Overall, I think the battle system fails because it has no connection with the origami theme. Why is it a circle? Why not something to do with folding origami weapons or deadly paper cuts?

The other half of the game is finding secrets in the world and freeing hundreds of toads. You can find members of this mushroom-headed species anywhere – by hitting insects, rocks, bushes, grass, trees or even small holes in the ground. A large part of the gameplay is dutifully hitting every single thing that looks hittable and usually being rewarded with a toad popping out to thank you. All of these toads hang out to watch your battles, cheering you on and joining in on the fight if you throw a few handfuls of gold coins their way. I wouldn’t say they are essential, but it’s nice to have an audience. It also keeps gameplay constantly active as you search for possible secrets.

Another main activity takes the form of ripped holes in the geography of the paper-made world, showing wireframes underneath. Walk into these dark areas and you’ll fall through, suffering damage and reappearing beside it. You can ignore many of these, but it’s worth engaging with them all as they give out coins and help bring a sense of workmanlike repair. Fixing them is simple, you just hold in the right bumper and release it, causing Mario to expel confetti he has collected in his equipped bag. This shower of multi-coloured paper settles over the hole and then shines for a couple of seconds before magically transforming it back to a whole piece of grass or rock or tree, and so on. You fill your confetti bag by whacking grass and bushes and besting enemies. You’re rarely without at least a half-full bag, and because grass pops back up after half a minute or so, it’s never an issue to farm confetti so that you’ve always got a full bag.

You have with you a little origami companion, Olivia. Her brother has brainwashed Princess Peach and has been stamping everyone into evil origami versions of themselves, as well as wrapping the world up in paper tendrils. So it’s up to you to bash your way across this craft world and save the day. Gameplay consists of quite large areas in which you roam about and solve simple traversal puzzles. There might be rocks in the way (smash them) or rotating fire contraptions  (jump through them) or large paper-craft monsters that you have to defeat with your hammer.

Each new environment looks gorgeous, the paper aesthetic conducive to bright colours, while an upbeat and constantly-changing soundtrack makes each area feel distinct. The idea of a fragile world means that some cool ideas can be brought forward, such as pencil missiles that punch through buildings and elevators, leaving bullet-like holes as you bang them out.

While the game can at times feel like it is being drawn out with minor battles and disappearing characters that you have to keep searching for before you can move ahead, it has a level of comfortable enjoyability that makes it worth recommending. Some pure Mario fans might feel it has too much talking. However, the almost-platformer design of the vast, open levels, combined with literally hundreds of secrets to find, will keep players engaged to the final fold.

Paper Mario was reviewed on the Nintendo Switch with code kindly supplied by Nintendo Australia.