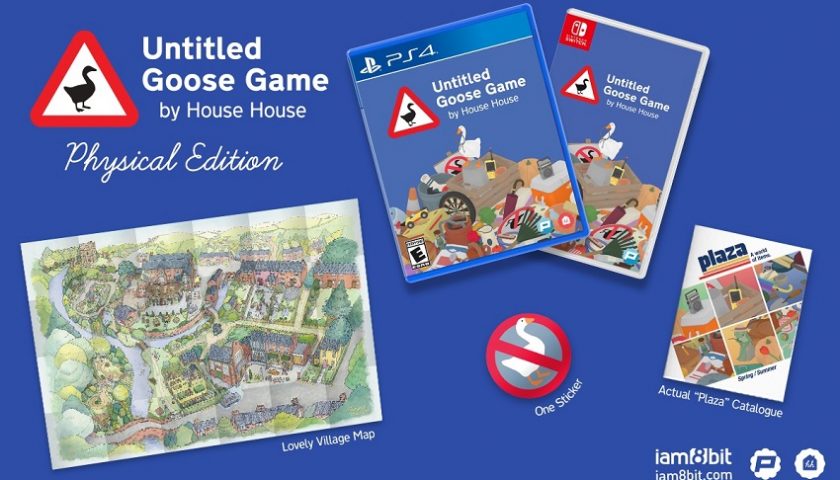 They’ve done it, they’ve finally done it. The goose has been caught and boxed up. Well, the Untitled Goose Game, at least.

Thanks to iam8bit and Skybound Games, the boxed version of everyone’s favourite goose game will be available worldwide, including a bunch of extra goodies to enjoy.

Included in the package is a game disc or cartridge, a 24-page retail catalogue of the in-game Plaza shopping district, an 11” x 17” village map poster illustrated by Melbourne artist Marigold Bartlett (who is also working on upcoming game Wayward Strand), and a “No Goose” sticker to stick wherever you want to make geese feel unwelcome.

It’s a charming little package befitting of an utterly charming game. In particular, Bartlett’s map design is wonderful and would look beautiful framed on a wall. Oh, and owning a physical copy of Untitled Goose Game is cool, too.

Additionally, Dan Golding’s delightful Untitled Goose Game soundtrack adapting Claude Debussey’s Préludes is getting a separate vinyl release. Of particular intrigue is the “Double Groove” nature of the record, where each time you place the needle, the music will take a different path, just like the game. I’m no music or vinyl expert, but that sounds very cool indeed.

As iam8bit is based in Los Angeles, the pre-order pricing is in US dollars. Untitled Goose Game’s vinyl soundtrack is listed as ‘shipping Q4’ and pre-orders cost US$29.99. The PS4 physical edition pre-orders are US$34.99, while Nintendo fans cop a Switch tax, with pre-orders listed at US$39.99.

With the physical releases due approximately a year after Untitled Goose Game’s digital launch, it seems like the perfect excuse to be a misunderstood goose once again.