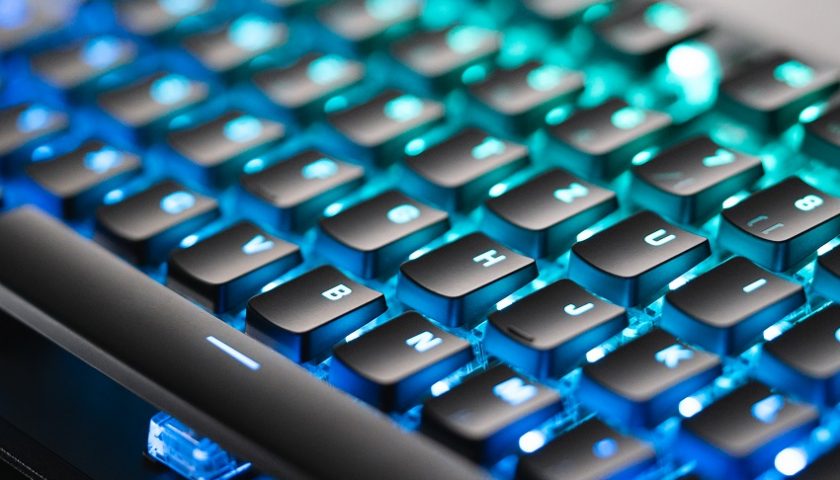 The gaming keyboard is such a personal thing. We’re at a point where it feels like while there is definitely no one size fits all option, there are enough out there that anyone can find one that works for them. That said, I think it would be hard to find someone that couldn’t appreciate Roccat’s latest mechanical keyboards, the Vulcan 120/121/122 range.

I was given the 120 model for review, and from the second it came out of the box, two things were apparent: the size and the quality. Firstly, this keyboard is an absolute beast, which immediately works both for and against it. The anodized aluminium base rests on two foldable feet with rubber bottoms that keep it firmly in place, and along with a sleek appearance it gives the keyboard a solid, clean feel. The raised Titan switches on top give the keyboard height, but not so much that it isn’t comfortable, and it does come with a detachable wrist rest to make the whole thing a little more ergonomic. Sort of. Where the rest of the keyboard feels high-quality, the wrist rest feels a little like an afterthought, with the hard-plastic material feeling out of place and the sheer size of the keyboard and rest combined making it hard to fit on a desk. Though it does make for a slightly nicer gradient for my wrist, with the rest attached this keyboard can barely fit on my (albeit quite small) desk. Thankfully, it attaches magnetically and is easily put to the side if you need to temporarily save a little space.

The key spacing can also take some getting used to, and both my housemate (with his large hands) and I (with my tiny, largely impractical hands) found the distance between the keys a little awkward. But this is a function of raised keys, and this same property is what makes them easy to clean, as well as being part of their unique design. Dusting this keyboard is a dream, but the real success is in the way Roccat’s unique Titan switches work. If you’re particularly tech spec minded, you can have a look on their website to see the gritty details, but on a very basic level, they’re quick and they’re responsive. Despite their height, the keys feel solid, and while it means that every keypress has to be quite deliberate, you’ll also rarely end up double pressing a key accidentally, or bumping something you didn’t mean to. During the first few days of my time with this keyboard, I wouldn’t have said that, but as soon as you get used to the tactile nature of these switches, they really just work. I tested them on a variety of games, including RPGs, hectic platformers, Overwatch, and even Cook Serve Delicious 2, and they were comfortable and super quick. Learning to type on them at my normal speed took a little more time, but again, once you see just how sensitive and responsive they are, the keys become much easier to work with.

Like with most mechanical keyboards, there is a telltale clack to the keys that can become annoying to anyone else around you, but it’s not as loud as some other keyboards unless you’re a particularly aggressive typist. If you feel like you want your typing to be more annoying, however, Roccat sure has the program for you. Roccat Swarm, the software that allows you to customise almost every element of this keyboard, will allow you to add custom sounds to play when you hit the keys. Hitting the keys can ding like a typewriter, or a selection of pew-pew laser noises are available for those that want to feel like they’re defending the galaxy every time they write an email. The possibilities for annoyance are endless, and while these options are pretty gimmicky, they’re fun to play around with.

On a more useful level, the Roccat Swarm software also allows you to customise the RGB lighting of the keyboard. Each key can be configured separately, with individual LED lights capable of displaying up to 16.8M colours set into each switch. If you have a specific scheme in mind, or you particularly like the idea of your keys pulsing to a set rhythm, you’re free to customise to your heart’s content. But one of the highlights of the new Vulcan AIMO keyboards is their incorporation of the AIMO Intelligent Lighting System, which will choose your colour scheme for you, and adapt to the way you use your keyboard. It will cycle through colours and effects, reacting to your individual key presses, and keeping your gaming environment interesting. If you have multiple Roccat AIMO compatible devices, then they will interact and your whole setup can come alive around you – but honestly, just having the keyboard do its thing is exciting enough. If you’re someone who’s impressed by nice lighting displays, you’ll have a great time with this. The brightness of the LEDs can also be adjusted, and at their brightest, they can make quite an impact, particularly if you aren’t the person looking straight down at the keyboard, which is something to be aware of – but overall the intense brightness is a good thing.

Ultimately, there isn’t much to dislike about the Vulcan 120 keyboard, beyond the price tag. It’s definitely on the higher end of gaming keyboards, and while it has the quality to match, there may be cheaper options out there that could do the job just as well. That said, god does this keyboard just feel good. From the solid volume knob to the smooth finish on the Titan Switches, the Vulcan isn’t here to mess around, especially after a little getting used to. After spending several weeks with it, I can say with certainty that I’m only growing fonder, and its quality materials and solid design mean I’m confident that I’ll be able to use this as a main gaming keyboard (and decent allrounder) for a long time to come.