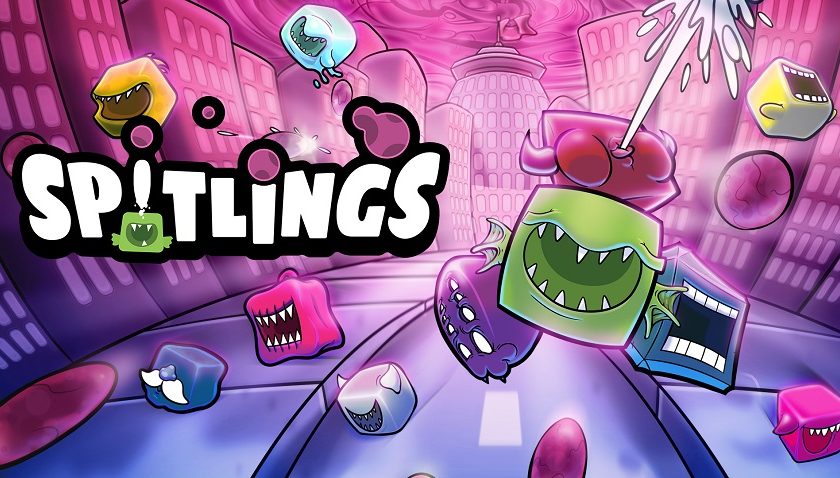 Spitlings – Chaos With A Short Lifespan

Spitlings is a frenetic, brightly coloured chaotic arcade experience.  Designed for up to four people, the aim of each level is simple: get rid of the bouncing balls on the screen and don’t die in the process. It sounds like a simple goal, but when there are a thousand things happening on the screen at once, and your success is dependent on everybody around you, you see just how difficult this really is. Knowing I would have the best experience with my four favourite idiots, I gathered them up and we gave up the next few hours of our life to spit on things and save the world.

When I sit down to play a new game, I don’t like to read anything beforehand. No manuals, no guides, nothing. I like to go in blind and hope that the game will teach me how to play as I go. Spitlings does this very well…if you start in Story mode. If you jump straight into Party mode (like we did) there’s no help given. You’re dropped into different levels and expected to just know what to do…. Which, to be fair, you definitely would if you played the game the way they wanted you to.

Jumping straight into the deep end was fun, however, and really forced us to learn the game quickly. It didn’t take long to figure out what was trying to help us and what was trying to kill us. Every level of this game is basically different variations of the same mechanic: there are balls bouncing around the screen that will kill you if they touch you, but you can spit at these to break them apart and get rid of them. Some levels have extra little elements you can use as barriers to protect yourself from the balls of death, but these can all be spat at and destroyed. Hilarious at first but not so funny when they were the only thing keeping you safe.

Spitlings is meant to be played with your friends, not against them. If one of you dies, all of you die, so it’s really in your best interest to work as a team to meet your goals. My group and I did not do this. Rather than look at the situation and assess it logically, we just ran in blasting everything we could. Though this is not at all how the game is meant to be played, it was great fun and I highly recommend it. We died a TONNE, and it made every level take much longer than it should have, but it was hilarious to sabotage the group at every chance we could. Plus, because Spitlings is such a chaotic experience at all times, nobody ever knew exactly who in the group was screwing everybody else over (though I can tell you right now it was usually me or my brother because we’re just kind of douchebags). The few times we did band together to get ahead, we knocked out levels surprisingly fast. I’m talking surprisingly fast, to the point we all went “wow, that’s all we had to do?”. But where’s the fun in playing a game properly?

Once we figured out what we were doing, we decided to try our hand at Story mode to start unlocking some of the hundreds of different Spitlings you can play as. This mode drops you into a ‘hub’ where you access different levels and free captured Spitlings by destroying balls of death and utilising bounce pads to navigate the area. The design of the story mode hub was the most infuriating thing about this whole game, and though we persevered for as long as we could, it was this element of the game that made us lose interest. Bounce pads were placed underneath the portals to the levels, which meant as you’d leave a level you’d get bounced straight back into it by the bounce pad. As a group of 4, we all had to coordinate leaving the levels so we didn’t keep getting bounced back into the very area we were trying to leave.

Spitlings is a very cool concept, and the frenzy of each level makes it a fun experience for a group of people. However even though the levels present you with more complex puzzles as you go along, the mechanics of the game are so repetitive that it gets boring very quickly. It definitely gave my group of friends and I a few solid hours of enjoyment, but our general consensus at the end of our gaming session was that there wasn’t anything there to bring us back to it.

Spitlings was reviewed on the Nintendo Switch with code kindly supplied by the publisher.