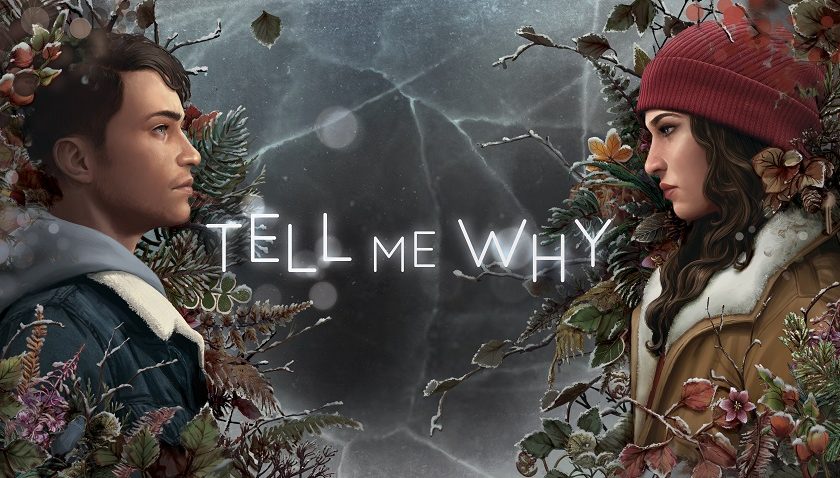 When Life is Strange was released in 2015, I can honestly say that it changed my life. When people ask me about my favourite queer representation in games, it’s still the first title that springs to mind, because even though it was by no means the first example or even the biggest example of queer representation, it was the first one that made me feel truly seen. With Life is Strange, developers DONTNOD burst onto the scene and proved that they were interested in telling nuanced, diverse, intriguing stories and that they knew how to do it well. So from the moment their new title Tell Me Why was announced, overtly and proudly featuring a trans male protagonist, I was excited. Trepidatious, but excited. Because even the best developers, with the best intentions, have been struggling to tell queer narratives – and trans narratives in particular – for years, and a lot of us are used to being disappointed. Thankfully, from the moment I began interacting with Tell Me Why, my fears were allayed by the fact that in order to inject truth and realism into their representations of diverse characters and cultures, DONTNOD did something that’s so often overlooked – they consulted the people whose stories they were trying to tell. And at its core, Tell Me Why is a shining example of the kind of powerful story that can be told when you get these things right.

While it explores a variety of different themes, Tell Me Why is primarily about the relationship between two twins, Alyson and Tyler, and how their connection with each other allows them to explore and shed light on the truth of their shared past. After a series of traumatic events forced them to be separated as children, they are reunited years later as they attempt to sell their childhood home in Delos Crossing, Alaska, which is filled with reminders of a loving but troubled past. The more time they spend together in their hometown, the more they begin to suspect that there’s more to their family’s story than they knew, and the two begin attempting to uncover a series of deeply guarded truths about their mother, their town, and themselves.

The twins share a bond that allows them to experience each other’s memories, which they must rely on to try and piece together moments from the past. As memory is an incredibly subjective thing, there are times where the twins’ memories of an event will differ, and they must make a choice about whose recollection they will take to be true. The choices around these moments, as well as decisions made in conversations and interactions with the environment, will shape the strength of the relationship between the twins and their relationships with the other residents of Delos Crossing, as well as decide what becomes the ultimate truth about the events of their childhood.

The information that the twins uncover about their past takes them to some dark places, and some of the strongest themes in Tell Me Why are about dealing with grief and trauma, and how we begin to heal after these events. To ensure accurate representations of these issues along with mental health and mental illness, DONTNOD consulted with mental health professionals – and it shows. While these moments are emotional, the handling of them always feels respectful and powerful, and that power is rooted in their attention to realistic portrayal. That can be said for every part of this game, and it’s one of the things that makes it stand out – everything feels so realistic. DONTNOD said in a letter that accompanied my review code that they “avoided hyperbole in favour of nuanced portrayals that more closely resemble the ways actual people react to the world around them.” It works.

I had a lot of questions before I started playing Tell Me Why, but DONTNOD preempted them. Along with some information about their consultation process, an FAQ page on their website gives some information about whether or not the game includes instances of transphobia and homophobia, as well as more specific points about the use of Tyler’s deadname. For those that are unaware, a deadname is the name given to an individual at birth, before transition, and it can be harmful for many trans people when used to identify them. As the FAQs explain, Tyler’s deadname is never used to refer to him, and in childhood memories, he is referred to as “Ollie”, which is the first name he chose for himself. This page may answer some questions anyone might have before they commit to playing the game, and it only contains mild spoilers (very helpful ones).

The bond between the twins feels natural, and it’s easy to become invested in their story. They’re both likeable characters, each with their own lives and pasts. Alyson has been living in Delos Crossing since the beginning and has existing relationships with people in the town that plays into the events of the story. She likes astronomy, and roller derby, and has a collection of amazing sweaters. Tyler, just returning to the town, is learning to connect with the people who live there, but has spent his time discovering himself and working on becoming a park ranger. He has a lovingly rendered denim jacket and loves making terrible jokes. While Tyler’s journey to becoming a trans man feels real and is very much a part of who he is as a person, it’s not the focus of too much drama – it’s just who he is. His interactions with some of the other queer characters in the game were some of the most relatable I’ve ever seen, in the best possible way. It’s hard to put this eloquently, but the whole vibe of the game, and these characters, it just feels good.

Gameplay-wise, there isn’t too much variation here. Most of your time will be spent walking around Delos Crossing, interacting with people and recovering memories. There’s a lot of walking and clicking. But it never felt like it needed to be more. It’s a slow-paced game, but that allows for reflection on each new choice and each new piece of information, and the lack of urgency with which anything happens was a big positive for me. The story just gets to unfold, without getting caught up in gimmicky mechanics. Plus, the environment is a beautiful one to just exist in, with the attention to detail making for some stunning landscapes. Even the in-game artwork, which was designed by Tlingit artists native to Alaska, seems lovingly crafted. Everything about Delos Crossing feels real, and the fact that DONTNOD consulted with Tlingit cultural advisors really shows.

I could talk about how this game makes me feel all day, but overall, the developers just deserve to be praised. This is a shining example of what can be achieved when the right kind of attitude is adopted, and the right kind of care is taken. In being dedicated to portraying real people dealing with the world in a realistic way, DONTNOD has managed to create one of the most emotionally-charged, nuanced, and relatable stories I’ve seen in a game to date. Attention to realism pays off, and I hope other studios take note, and we see more of them using consultation to ensure accuracy in their narratives. This game is going to stay with me for a long time, and that’s one of the big reasons why.