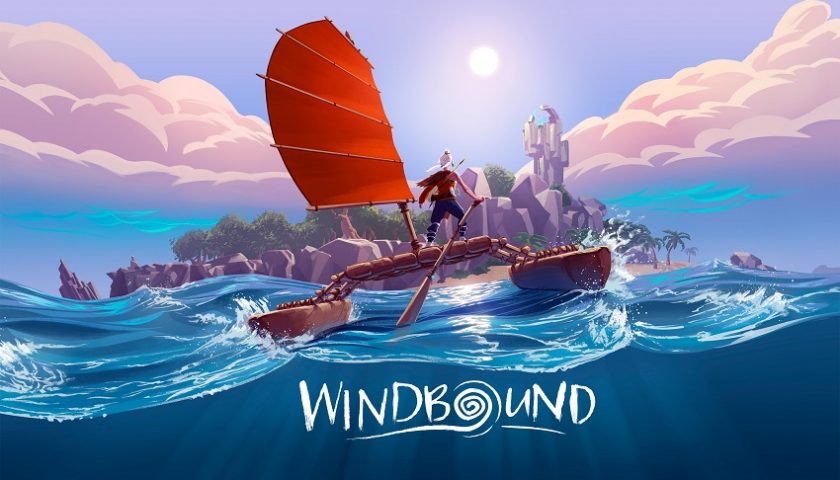 The visuals might have you hoping for a cutesy sailing adventure full of charm and whimsy, but you need to be into survival games to enjoy Windbound. And while only the bravest will jump into Survival Mode proper, Windbound’s saving grace for Bear Grylls dropouts is the option of Story Mode, whereby if you die you keep your entire inventory, chapter place and have an easier time with combat. Choose Survival Mode and each death shoots you back to Chapter One with empty bags. And let me tell you, with the number of times I died early on, that option would have had me quitting permanently.

To begin with, the procedurally-generated islands you explore are small, food and resources scarce and there is little in the ocean apart from saltwater. I found hunting animals in the opening chapters almost worthless, as by the time you spend stamina and resources on weapons, ammo and time to hunt and harvest/cook them, you end up with little-to-no gain for hunger and stamina. I found myself gaming the story mode itself for the first couple of chapters, practically ignoring hunger and trying to complete chapter requirements before I died from gastric neglect.

If there is an aspect of Windbound that stands out, apart from its obviously beautiful art aesthetic, it is the core mechanics of sailing. This is what you will be doing for a lot of your time. It is not player-friendly. You don’t just hop on your crafted sailboat, press ‘sail’ and steer it across the water. You must come to understand how to harness the wind by tightening or loosening the sails. To move against the wind, you must tighten the sail and use a tacking technique, moving from side to side to progress against the wind’s direction. To travel with the wind, you have to loosen the sail. There are further complications, though. The boat will shift direction with the wind and the wave formations, often steering you precariously close to rocks or small reefs that can appear at almost any moment. To add to the ‘fun’, sea creatures can leap at your boat, necessitating a trip to a bamboo island to craft some spikes to protect your boat from such attacks.

Windbound’s general gameplay loop consists of starting each chapter on an island, finding three islands with towers on them, climbing these towers to press a button, which puts some magic into Kara’s necklace. You then need to find a central structure to press a further three buttons and progress to a kind of luminal space between chapters. Here, some story exposition is etched upon the walls before you have to take on a rough-water sailing gauntlet through a course filled with coral and sharp rocks. If you have earned enough blue shards, you might be able to purchase a permanent buff or upgrade, before you sail into a glowing portal and wake up in a new chapter, to repeat it all again. The difference is that as you progress through chapters, the islands become larger, supporting more varied biomes, new creatures and resources. This expands the gameplay as you are better able to maintain your hunger and stamina to keep exploring.

The ocean also increases in complexity, with more islands dotted about to explore, some of them offering permanent upgrades to your stamina or extra shards to spend before the next chapter. Islands become more difficult to reach, walled off by stone rings or coral that must be negotiated to find openings. You really do need to master sailing in order to succeed. Indeed, you can find yourself in the water so much that you might even run down your stamina while sailing. Generally, it does feel like your stamina depletion slows down while sailing, but I would have enjoyed exploring more if it had paused altogether.

Although it is encouraged, I never found hunting worthwhile. The controls, in general, are too floaty to feel precise. Attacks are delayed after button presses, meaning that aggressive animals have either moved out of the way or gotten their attacks in first. Also, the aiming of weapons – sling and bow – feels slow and inaccurate and I soon stopped bothering. The problem is that you need meat and bone and tusks etc. to craft certain things, so being forced to fight some of the larger animals feels a bit frustrating and unfair. I realise it is the focus of a survival game, but I’m just not a fan of attrition. And so the tactic of bee-lining for the towers, avoiding aggressive creatures and gathering enough to make it to the next island became the norm for me.

Even though I bounced off what is arguably the main point of the game, there’s something about Windbound that kept me hooked. The art design is obviously gorgeous. The bright, colourful renders are inviting and charming, as are the little animation flourishes that alert you to harvestable resources. The sailing music is nice, striking up as you embrace the rolling expanse, eyes squinting for any sign of land. Sailing is never a stressless experience, yet there is an undeniable satisfaction in wrestling control against the elements, of harvesting the wind to sail wherever you want. The ocean physics are also impressive, making you pay attention to each wave and trough as it might prematurely end your journey. Explore the edges of a map and you’ll encounter some truly awesome waves.

I must admit that as the world became larger and more complex, I enjoyed my time exploring it more. It made me desire a version of Windbound that was more about discovery and exploration at my own pace and less about maintaining my character. Perhaps some developer will, in turn, be inspired by this title and I’ll get to live out my desire as an invincible pirate hoarder with nothing but time on my plate to scour the seas.