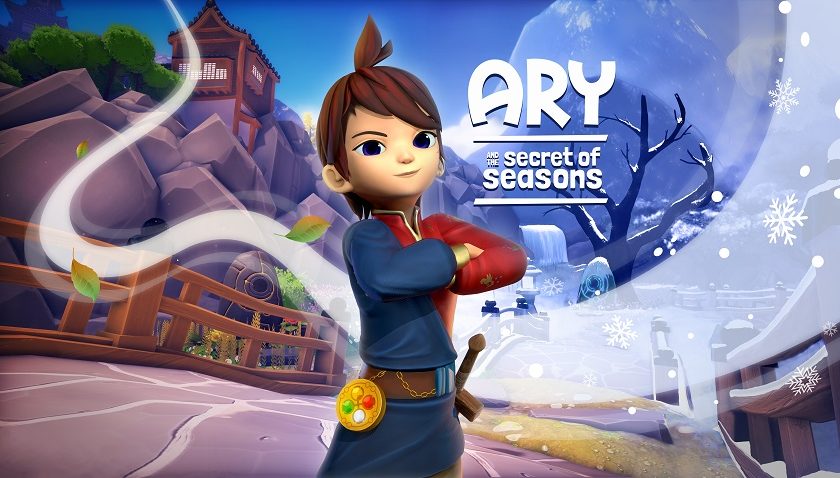 Ary and the Secret of Seasons – Whimsy and Glitches

When I was young, I spent a lot of time playing out epic tales with whatever collection of toys I could put together in the moment. Dolls that had been given as gifts were riding horses either twice or half their size (never the right size), plastic dogs were sitting on chairs meant for people and Pokemon figurines were leading the charge against whatever the common enemy was for that day. It didn’t matter that nothing matched, because what was important was the story in my head and the feeling of guiding the heroine to victory in whatever scenario I had created. In its opening scene, Ary and the Secret of Seasons showed me a protagonist doing almost exactly what I had done as a young girl, and immediately began tugging at my heartstrings. Aryelle (or Ary, if you don’t want her to feel like she’s in trouble) is the perfect protagonist at the heart of a whimsical 3D puzzle-platformer that I should be able to recommend with no qualms at all.

And I really wish I could, but wow. The glitches.

When the game begins, we are introduced to our heroine as she acts out a battle using assorted household toys. She longs for adventure – the kind that her father, the Winter Guardian, experienced in his past. Her brother, Flynn, was in training to take over the family title from their ailing father, but he has recently disappeared, leaving the family in distress and the power of winter unwielded. It soon becomes clear, as crystals fall from the sky, and waves of unexpected seasonal changes take over various towns across the land, that the balance of the seasons is out of whack, and the world is in need of the guardians to investigate the problem and restore the balance. The Guardians of Seasons (the organisation dedicated to making sure this kind of thing doesn’t happen) need the winter guardian to join them, but given he’s ill, and his successor is missing, young Ary takes it upon herself to go in his place. This is an issue, because the organisation is grossly archaic and traditionally only run by men, but she chops her hair short, finds her brother’s sword being wielded by a rogue hyena that has appeared in the town, and thus begins her journey. It’s all very Mulan, in the best possible way.

As the winter guardian, Ary is able to use the power of winter to create little pockets of the season in other environments. She the game progresses, and she is trusted with more power to complete her quest through the world of Valdi, she becomes able to wield the other seasons too, and must find ways to traverse through the world and solve puzzles by creating seasonal pockets. The ‘spring’ bubble, for example, will create vines in the world and remove water from an environment, ‘autumn’ and ‘summer’ can create pockets of water in otherwise dry areas, and ‘winter’ will reveal ice platforms that can be used to reach new areas. Throughout the course of the game, Ary must make her way through temples dedicated to each of the seasons, which will force her to use her powers in ever-changing ways.

Along the way, she’ll have to fight a horde of regular, run-of-the-mill enemies (mostly hyenas or angry mushrooms), some of which will react to the different seasonal pockets in different ways. Creating a pocket of summer, for example, and fighting within that bubble, can cause enemies’ ice shields to melt, but it can also strengthen spiky armour that can make them harder to fight. Often these fights can be ignored entirely, but when you’re forced to engage with enemies, it does require some level of smart thinking that spices up an otherwise very straightforward combat system.

On the face of it, as I describe the mechanics and I think about the whimsical story and the sense of childlike joy I feel playing this game, Ary and the Secret of Seasons ticks all the boxes. But the problem is, it feels unfinished. The seasonal pocket mechanic is great and is usually responsive, but other elements of the gameplay are glitchy or straight-up broken. Side quests, for example, while they are always a welcome inclusion to me, and a way to build out a world and make it feel more complete, are in this case often broken or go nowhere. The quest markers aren’t always clear, and sometimes the minimap will disappear entirely, making any kind of objective hard to complete. The main questline isn’t always obvious, even though you can check your objective in your journal, and there were a few times when the journal itself would be broken too. Trying to navigate to the broader map, or to look at my inventory, occasionally led to screens being overlaid on top of each other and becoming frozen. Some areas I got to by pure luck, rather than intuitive puzzle-solving, and sometimes the cameras would lock on Ary in a particular view and then stay there, trained on an NPC as Ary continued to run around the map out of sight. There were just so many little things that I felt needed to be fixed before I can recommend this as a functional game.

It’s hard to say that because it’s beautiful. I love the concept of what the devs have tried to do, I love the story, and I think the implementation of the mechanics of the seasons is both innovative and gorgeous to look at. I think, if I were a child playing this game, I’d be able to forgive a lot of the smaller glitches and inconveniences. The loading screens are long, for example, but I could forgive that. The mini-map is glitchy and doesn’t always show all the objects of interest, but that could be okay – it’s fun to run around as Ary. But game-breaking glitches are a different story. The lack of accessibility options, paired with an overlay that’s tiny and often hard to see, isn’t really okay. It feels like it needs some work. But I hope it gets it. I hope that patches allow this game to live up to its full potential, because I think this could be a beautiful story for young and old alike, and I know I would have latched onto it instantly had I played it as a young girl. Ary and the Secret of Seasons could have been a breath of fresh air with some cool, creative mechanics, as well as a return to the sorts of games I miss playing as a kid – it just needed to be finished first.

Ary and the Secret of Seasons was reviewed on PS4 with code kindly supplied by the publisher.