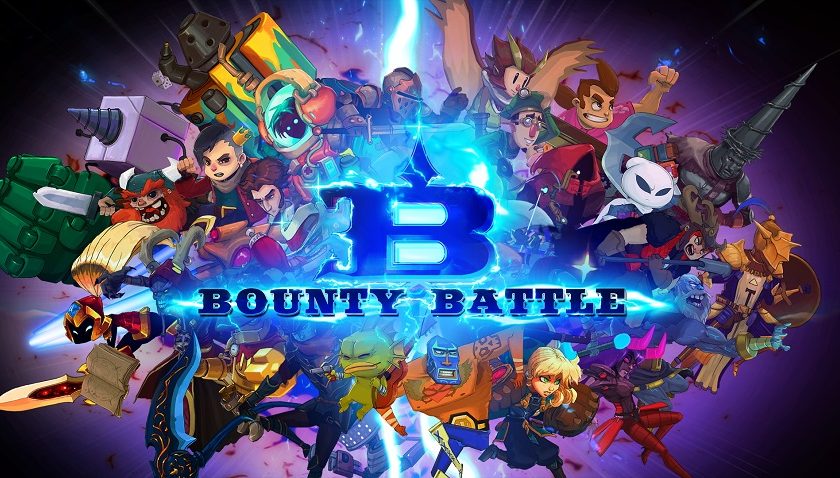 Firing up Bounty Battle, you’re greeted with a cinematic masterpiece of all your favourite Indie game characters, come to life, fighting one another for glory. It is thrilling, exciting and sets the stage for what is hopefully going to be an amazing gaming experience. With characters from Owlboy, Dead cells, Darkest Dungeon, and many others, there is only one question that has truly stumped us with this game … how in God’s name did they screw it up so badly!?

From a high viewpoint looking down, Bounty Battle looks like a really good game. It’s essentially a battle brawler fighting game, not too dissimilar to Smash Bros in nature. You have 32 characters to choose from, a variety of stages and there’s a number of systems and dynamics in play to differ it from other games in the genre. Each character has their own set of normal and special attacks/moves, but are all executed under the same input, which is global across the entire roster.

You have normal attacks in the form of quick and heavy, special moves, summon abilities and ultimates. Your goal is to either drain your opponent’s life bar or knock them off the stage (if the game mode allows this). In an attempt to reduce spamming, your can be penalised for using the same move set, making the attacks non-effective, and your special moves are limited by an energy bar which auto-regenerates when you’re not using them for dodge rolls, or specials. KO’ing your opponents gives you points and you can use those points to summon NPC’s to fight alongside you or use your unique ultimate for a massive attack, this is all outlined fairly well in the game’s tutorial, just be careful if you revisit this section of the game because it doesn’t allow you to quit to the main menu if you accidentally select it (like this reviewer did a few times).

Now, did you memorise all that? Good because you can now safely forget it all as it means almost nothing when it comes to the gameplay. It appears that every one of these systems, although full of potential, was thrown into the gameplay without any further thought or development of their fun factor or effectiveness. In every battle, it was all too easy to spam and mash our way to victory as every character felt very similar and the same combinations worked every time (regardless of AI difficulty). At no point did we feel limited by the energy bar or the anti-spam mechanic. The biggest annoyance was getting knocked down as the options for wake-up attacks or dodges seemed non-existent. This was a very effective way to get a victory but also very annoying when you’re on the receiving end. The final result is a victory that didn’t feel rewarding or a defeat that was highly frustrating.

The ultimates and summoned NPC’s were quite a letdown. If you can cast your mind back to your last Smash Bros game and someone got the final attack orb, as soon as they pressed ‘B’ you were met with an incredible/dynamic move that felt like the world was going to end. Bounty Battle just seems like another regular move and the NPC’s exist only to mildly disrupt your opponents (or you) here and there until you KO your opponent, removing them from the game.

The visuals look cheap and nasty. From a screenshot, they look quite decent and true to their original games, but when they start animating and moving, you will see what we mean. The animations and graphics, in general, look like they came from a quick browser game, where there is one drawn image and they simply move the limbs from the same picture. This makes the gameplay worse when you’re trying to maybe react to attacks, etc as there’s a lack of frames to smooth things out or give indicators of what’s about to come, instead, it purely comes down to spacing and timing your attacks or defence based off that. The most baffling aspect of all of this is that the game has slow down. We’re not talking about when you KO an opponent and the game slows down for what we can only assume was an attempt at dramatic effect (which is also annoying as it wrecks any resemblance of pace the gameplay has). Oh no, during battles there was a noticeable slow down when there was too much happening on the screen like our PC’s simply couldn’t handle the sheer number of pixels on the screen or something.

There is not a great deal of single-player content here, apart from smashing the AI you can play in some challenges/tournaments which are simply a series of fights with an altered ruleset. In the tournament mode, this is the only way to unlock different skin colours for each character. A nice addition is that Bounty Battle takes advantage of the steam remote play, so if you have friends online, you can all play this together, but that’s assuming they’d want to play this with you.

There’s not much else to say here, Bounty Battle is a very poor game. It looks horrible, plays horrible and it’s asking a hefty price for what’s actually on offer. Calling it a Smash Bros clone is the highest praise it could ever earn, and it doesn’t even deserve that. There was definitely some potential in some of the introduced systems, but they were never developed to the point where they actually meant something or made the game fun and engaging. The game feels cheap and nasty and doesn’t add anything to the genre that can redeem itself, give this one a huge miss.