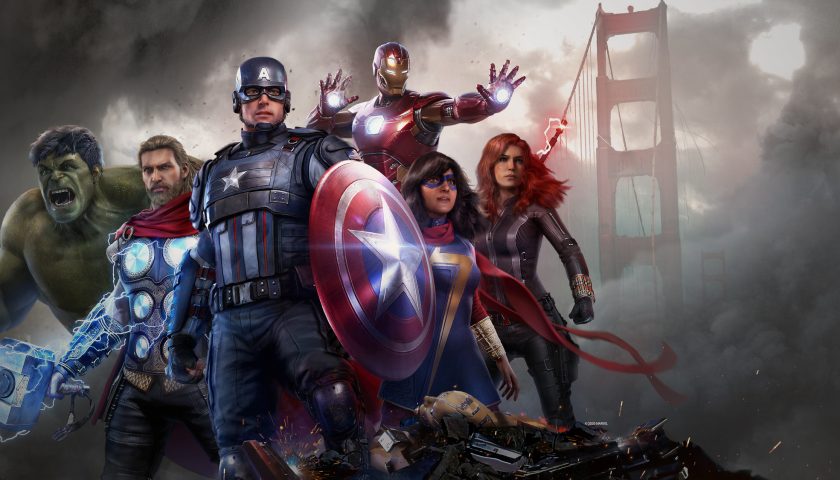 Marvel’s Avengers is one of the years biggest titles, it’s also one that features a healthy co-op component, so what better way to tackle a review for the game than to do it in co-op as well! A couple of Player2’s own Avengers, Matt Hewson and Paul James have combined their own powers to put together this co-op review of Crystal Dynamics’ latest

Paul: So Matt, we’ve now had a healthy period of time with Marvel’s Avengers, a game that will instantly draw comparisons to Destiny, The Division, Anthem and Monster Hunter, but also of course other recent Marvel titles, Marvel’s Spider-Man and even Ultimate Alliance 3. Where does this game sit in that spectrum of titles and do you feel it has acquitted itself sufficiently well?

Matt: There is no doubt that this is something of a strange beast. For starters, I want to look at the story which is, in my mind, much better than any game in this genre. Destiny tried to give us a good story but missed the mark and god knows what the Division was trying to tell us, but Marvel’s Avengers gives us a rollicking good 8-10 hour single-player campaign that features fantastic writing and some genuinely sweet moments. It could have easily wandered down the generic, bombastic save-the-world type story but the writers used a deft touch to give proceedings plenty of heart and humour. Also, I have already written about it but how wonderful is Kamala?

Paul: Kamala is undoubtedly amazing, and the stare of the show in my eyes, though I do feel she was done a bit dirty as the game progressed. As more of the Avengers join the party the focus does shift more and more towards them and though Kamala makes some great appearances, her broader story does begin to take a back-seat, and I would’ve loved for that balance between her narrative and the Avengers narrative that was established in the first half of the game to have remained in-tact through the back-end. Not to be though, she was sensational, and regardless of how I feel about that balancing act, the Avengers story was also quite fascinating as they aim to rebuild their reputation. It leaves me incredibly excited to see how they can spin stories out of the future characters like Spider-Man, Hawkeye and more. Though the uncanny valley factor was there, and I could still hear Nathan Drake in my Iron-Man (for example), I do feel that the representation of the Avengers themselves was also quite good, they looked good, spoke like I’d expect them to and had just enough nuance to ensure that we didn’t automatically assume they’d just save the day. How did you find the Avengers themselves and the remainder of the cast?

Matt: I think they did a great job with the whole team. Some wonderful moments, like Thor arriving at the last minute to save the day, gave me plenty to smile about. I also like how they are significantly different characters to control. Sure they share some similarities but playing Kamala the same way as you would play Hulk will lead to a quick death. Getting to know each Avenger’s strengths and weaknesses is essential because even at Normal difficulty this is a game that can punish your mistakes quite heavily. It may appear to be a button-mashing beat-em-up on the surface but I can assure you it is anything but. This is a game that demands you learn its systems otherwise you will be looking at the respawn screen more often than not. How did you feel about the combat systems?

Paul: I totally agree with you, and there are a few key encounters that will really expose players who are unable (or refuse) to adapt to the differing combat styles. This then obviously leads to players building an affinity for certain characters, that was certainly the case for me with Kamala being my go-to, but I dabble with others as well – regardless though, as far as the campaign is concerned, you’ll need to form at least a base understanding as you’ll assume the role of all the Avengers and various points, whether you like it or not. Once the endgame (pun intended) opens up though with the Avengers Initiative, you can lean heavier into your favourites as you so choose. The combat itself is really satisfying, though imprecise and clumsy at times, and making a mess of giant parties of goons with relative ease feels empowering. What did you think of the skill trees and how they intermingled with the combat itself?

Matt: I think the RPG elements are mostly fine, though they could use some tweaking. The special abilities especially feel like the need to be balanced a bit better. They take a little too long to charge which means you end up savinging them for big battles, which takes some of the fun out of things. I also found the excess of loot a little on the annoying side, especially when so much of it is useless and there are no options for group “dismantling” of the gear. This is a minor annoyance but one that has been solved in many, many existing titles. I also found myself fighting with the camera more often than I would like which led to some frustration with proceedings. I guess this leads to my biggest problem with the game as a whole. It feels like it is not quite baked in a lot of places. There are no major issues to speak of, just a bunch of little niggles that add up to more than they should when grouped together. How did you feel about the little, underdone aspects?

Paul: Yep, this is a game that needed another few months to cook and is the victim of the upcoming new console generation and the need to get the game out the door. The camera is painful as you mentioned,  the frame rate drops are appalling at times (weirdly for me the final credits were abysmal), and the voice acting doesn’t match the subtitles at times. These are all little things, none, at least in my time with the game, game-breaking, but they did spur the experience somewhat. The loot has clearly been designed with post game in mind because I didn’t need to give it any thought while I was in the campaign, simply auto-selecting did the job for me, but as you progress further into the endgame content, the need to customise properly will become more and more important. Do you see yourself delving into that content based on your experiences thus far?

Matt: Well I have put it a good 8 or so hours into the post campaign content and there is certainly an appeal there. Structurally it is quite similar to Warframe, in that a lot of the missions fall into a prescribed category. There are the “hack multiple terminals” missions, the “defeat waves of enemies” missions, the “hold a spot on the map” missions and more. Longer missions may combine a number of these mission types, but it is still essentially the same tasks that need completing over and over. While I am still enjoying my time I feel like there needs to be some variety added fairly quickly because the player drop off could be quite severe if there aren’t some fresh modes introduced. That being said there is a lot of fun to be had with friends along for the ride. I have been playing with my son and that has been an absolute blast and the netcode seems rock solid too. Have you ventured into the world of multiplayer yet?

Paul: I’ve put a few hours in myself, running with similarly leveled folk as well as others who’ve powered up well beyond the typical campaign end point. I’ve been largely impressed by the way the game balances the players varying levels to find a sweet spot for all, but you’re right, what you’re doing is fairly by the numbers and quite repetitious, something that I hope to see improved as more characters arrive, along with character specific quest lines, and also raids. They’ll go a long way to changing things up. I’m happy overall but there’s a lot of room for improvement in this area. As we bring it home, what do you see as being necessary for the future of this game to that it doesn’t fizzle out like we’ve seen one or two other profiled genre competitors do so far?

Matt: I think the key, especially with a title using such a big property such as this, is more story content. People are drawn to Marvel’s characters because of their stories, not because they can smash 100 generic baddies in a random science lab. To keep people invested, there needs to be regular doses of story. Now I don’t mean big tales like the campaign, but some nice little bite sized stories that suit the world. If Crystal Dynamics can give us this, it will go a long way to keeping people invested. In all for me Avengers has gotten off to a good start, with some fantastic elements and some areas that need improvement, but in all there is plenty of fun to be had at this point. How do you feel Paul?

Paul: The Avengers license gets people in the door, there’s no denying that, but the potential is there for people to check out quite quickly. The key will be to keep the rotating door going, keep bringing in new superheroes (and the leaks suggest there are a lot on the way), but then support them with deep storylines. Whether they somehow connect to the larger narrative of this game, serve as a bridge to an inevitable sequel or more doesn’t phase me, but they need to be as well spun, and well presented as the stories of the campaign. As I alluded to in my last comment though, more mission variety, and raids will also go a long way to keeping us all on the hamster wheel for months to come.