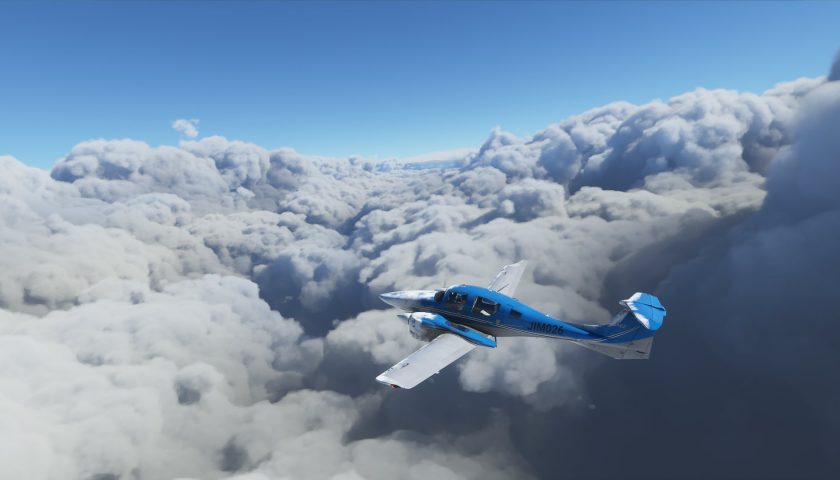 I’m flying around the world in a small plane in Microsoft Flight Simulator, taking and sharing pictures of my journey along the way from my @flightsimjim026 Twitter account. Starting in my home town of Sydney, Australia, I’m only just at the beginning, having flown to New Zealand, Tasmania and then arriving back to the mainland in Melbourne.

As I write this I’m planning flight 11, the next big ocean crossing taking us from Darwin to the north-west, heading in the direction of Timor and Indonesia. Our first real adventure outside of the Australia/New Zealand bubble. But just getting to Australia’s west coast proved to be a huge challenge in itself. One that, in my eagerness to complete my opening Australian leg, I had tucked away in my blind spot until I was confronted with it head-on.

You can catch up with part one here.

Around the World in Microsoft Flight Simulator – Part Two

Flight five saw us departing Melbourne and heading for Adelaide. It was a super easy flight; despite a small storm kicking off a short light show on my departure, it quickly dissipated as it moved towards the south coast, fading off into the horizon behind me as I headed further west.

As we left Melbourne in the background the stunning rolling hills and lakes of Victoria’s Grampians region moved quickly on by, sharing glorious views of Lake Lonsdale and Rose’s Gap. This opened up into a scattered mix of lakes and dryland as I straddled where the desert outback of Little Desert National Park to the north met the lush farmlands of the south. With no concerns about fuel or weather, after only a few short hours I arrived in Adelaide.

Storm over the Great Australian Bight

It was bucketing down as I spawned into the sim at Adelaide airport the next day, and the wind was blowing an absolute gale – 60 knots from the west, right back into our face. Any smart person would look at a headwind like that and immediately make plans to go back to their hotel and hang out at the bar for the rest of the day. With a gale blowing in from the direction I wanted to travel there was no way I’d be able to make the 1145 nautical mile trip on the fuel I could carry.

Before this started I’d suspected that my total inexperience would lead me astray at some point, but I wasn’t expecting it to strike so early in my trip. But let’s be real here, expecting no problems in an area that is notoriously cold, windy and weather-active as the Great Australian Bight was a dumb mistake and one that almost ended very poorly.

I didn’t think about that. I had tunnel vision for Perth, for progress, for getting out of Australian airspace. I wanted to start going places I’d never been before, conveniently forgetting I’d never been to the north-west of Australia. And so with steely determination and a misguided sense of destiny egging me on, I taxied to the runway and took off into the storm, certain everything would be okay.

I really couldn’t have been more wrong.

As I took off and gained altitude through the driving wind and rain, I realised the storm clouds surrounding Adelaide weren’t just widespread, stretching the entirety of the St Vincent Gulf and south towards the Southern Ocean. They stood as tall as my comparatively tiny plane could fly in good conditions. Like a fool, I kept climbing, hopeful I could somehow crack the canopy of cloud cover and simply sail over the top of this mess.

Freedom teased me as a rare poke of blue shone through the thick cover every now and again, but it was never more than a tease. The extreme cold at high altitude wreaked havoc within minutes after takeoff, forming ice over the majority of any forward-facing panel on the plane.

It’s technically known as ‘“icing”, and it’s just bad news all around. The collected ice upsets the flow of air over the wings and fuselage, which makes it harder for the plane to keep itself up in the air at its usual speed; you need to fly lower and faster to maintain the same level of lift. Not only that, it can also cause your instrument sensors to freeze over, the same sensors that the autopilot and onboard computers use to keep you safely in the air.

For nearly 2 and a half hours I tried anything I could try to find a way through, following openings in the clouds when I could find them. But the gaps were few and far between. As it started getting really thick I tried to climb to 20000ft, only to stall out at around 18000ft due to more icing. I tried this move a few times before the plane had seemingly had enough and stalled completely, sending me into a straight nosedive for nearly 6000ft.

Despite being safe in the knowledge I *wasn’t really* about to spear into the ocean, my heart sunk at the thought of not being able to make the flight in one piece. The sound of the wind rushing past the cockpit, the overspeed warning flashing on the navigation… it’s bloody stressful. When you’re *in the moment* the heart-stopping nature of an emergency is exactly that; heart-stopping.

After fumbling with the controls for what felt like an age–it was really only a few seconds–I miraculously pulled the plane level, doing so gently enough to avoid shearing the wings off in the process. I reset the autopilot to hold things level while I started thinking about other ways out of this mess. After going up didn’t work, I decided to try venturing lower, towards the ground. This would alleviate my problems with icing pretty quickly, but it would substantially increase my fuel usage as the air is thicker the closer you are to the ground. I’d already pushed the engines pretty hard getting this far and I wasn’t even halfway yet. It wasn’t looking good.

While I had made it through the worst of the storm, I was about 100 nautical miles into crossing the Great Australian Bight at the point I realised the battle against the elements had caused me to burn through half of my fuel already, and if I didn’t turn around and head for the nearest airport I probably wouldn’t even make it back over land in Western Australia. So internally I made the call to find the nearest airstrip, thankfully this is something the plane’s onboard navigation system can do with the press of a few buttons. It was only a few seconds before I found the closest tarmac landing strip near us was in a small coastal town called Elliston, in South Australia. I hit the ‘direct to’ button and the plane’s autopilot systems flickered a bit before transitioning to the new location, turning the plane with it.

While turning back would force me through the worst part of the storm again, I’d have the wind behind me this time, but visibility was again awful. I was flying purely off the navigational tools as, even after descending to 2000ft a mere 12 nautical miles out from the airstrip, I still couldn’t see the water below us. And then it happened; a glimmer of sunshine fought its way through the thick cloud and beamed over us like a beacon. Within seconds the cloud had parted and the mainland came into view, as did Elliston and the airstrip on its outskirts, and I breathed one long sigh of relief as I turned the plane and lined up to land.

This was a valuable learning experience, and it would change my approach to the rest of the trip entirely. I’d learned that I need to be more prepared when it comes to dealing with weather and that in cases like this one I’m almost better off not flying at all, rather than trying to push on through. But I think the most important thing I’ve learned is to be patient with this trip. It’s not going to be over any time soon, so I should stop trying to rush on through. It’s changed the way I’m thinking about the rest of the trip entirely, but I’ll talk about that more in part three.