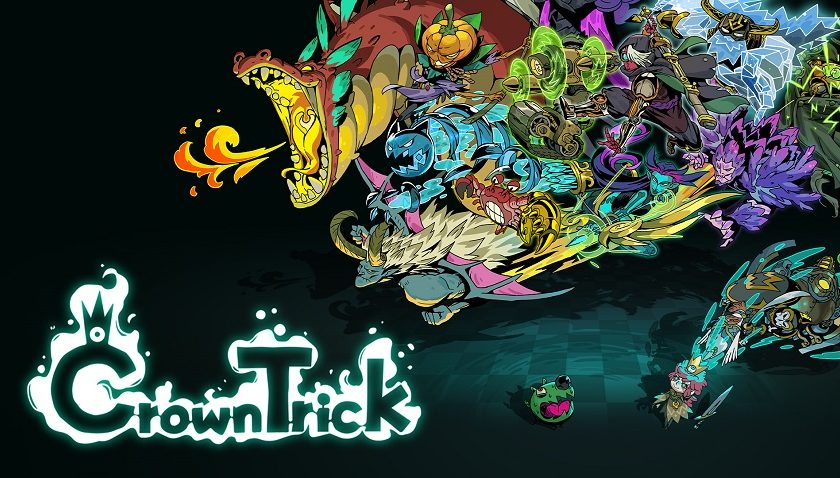 Crown Trick is like a superfood smoothie that actually tastes good. It has a potent blend of ingredients, you know you’ll enjoy it, but… what if you had that slice of cake instead?

Pulling from a wide range of inspirations, Crown Trick builds out a roguelike with all the good parts of games you already know and love. Combat is reminiscent of Crypt Of The Necrodancer, sans moving to the beat. A relic system akin to Slay The Spire’s can drastically alter your play mid-run. The tiered loot system mimics the last decade of games-as-a-service in it’s white/green/blue/purple/orange hues, aka Destiny. Even a stun-break system similar to Dragon’s Dogma is crucial to conquering later floors.

It has all the hallmarks of a great game. So, what isn’t quite clicking here?

Ok, let’s step through this.

Crown Trick plays out on randomly generated grid-based maps in simultaneous turn-based fashion, where enemies will only take actions when you do. This results in very clever tactical situations in almost every battle – figuring out how to manoeuvre around a room without being hit is not only key but a fun puzzle in itself. A teleport style dash mechanic gives you a few outs per room, should you get stuck in a jam.

How you approach combat varies wildly depending on your build and approach. How different weapons handle really emphasizes spatial awareness, thanks to the grid-based design. A spear attacks two spaces in front, while a hammer hits every adjacent square in a circular motion around you.

This is accentuated by the up to four skills you can equip, which are earned through a familiar system (as in, familiar spirit) upon defeating certain minibosses throughout the dungeons you delve, adding a collection layer to rounding out your skill roster.

Said skills react with the environment and each other in satisfying ways, and feel extremely powerful. An enemy can be drenched in water, for example, then take extra damage from a lightning attack. Barrels and enemy attacks can affect tiles in the same way, with status effects such as poison, scorched and oil – which can be causes of both chaos and opportunity.

If it feels like I’m moving through all these features at a fast clip, it’s because there is so much to unpack. All weapon types have over a dozen unique versions, all with randomized rarity and traits. There are similarly dozens of enemies with varying attack patterns to learn. We have multiple currencies, shops, permanent and run specific upgrades. PR info for the game touts “40+ active skills, 60+ passive abilities, 30+ usable items and 170+ relics”. I hadn’t even mentioned items yet!

There’s even a quite intriguing background story behind what’s actually going on in Crown Trick – another thing I’ve not even touched upon, damn – locked away in the notes and lore found when finishing new areas for the first time. It’s just a bit of a shame that the writing in the foreground can be a bit hit or miss. At face value, the writing appears simply to justify your actions in a more hand-wavey manner; yet the thought into the reasons and whims behind Elle’s journey through the Nightmare Realm do pique curiosity.

It’s all a big melting pot of ideas and mechanics, pulled together with a neat art style and animation. And it works. Systems on systems interlock and interplay in interesting ways, boss fights are compelling (well, mostly – screw that teleporting Witch) if a bit bullet spongey. One particular highlight of my time playing was a chess-themed battle against a certain foe – even though I fell after a long, drawn-out attempt, still a top moment of my time with the game.

And so, we inevitably turn back to the fated question. What is it about Crown Trick that’s pushing me away?

The answer is nothing. Nothing at all. Crown Trick is a really good, sometimes great game. This is definitely a good one of those, for a crowd that would go wild for it. It’s got everything you could want out of this type of dungeon delving roguelike, and more.

I genuinely worry that coming out in this point of time in such a crowded space and genre, without a significantly large “wow factor”, is going to mean this game won’t find the audience it deserves. I know I could be that audience, if we weren’t already spoilt for riches this holiday season (both broadly in the gaming space, and roguelikes specifically).

There’s some great stuff here, and when everything comes together, you can get some great moments of satisfaction. But when presented with a platter full of sweets, even the most delicious apple is still a piece of fruit.