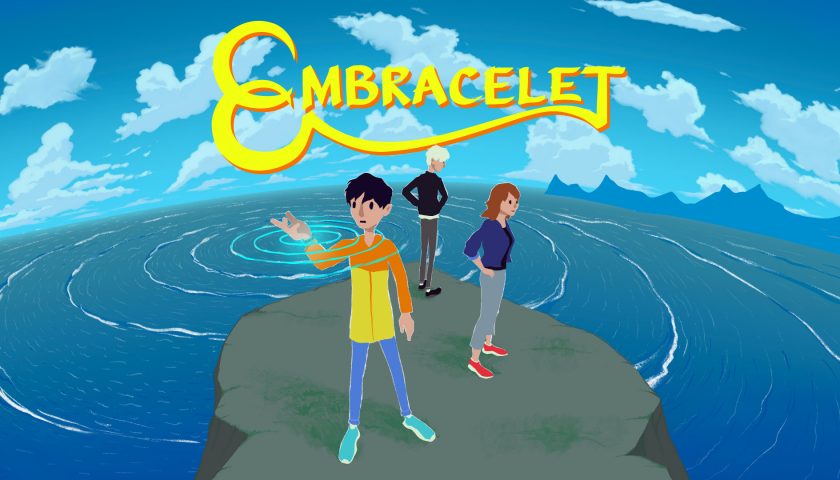 In September, (before taking up my new writing position at Player2) I had been following Embracelets solo developer Mattis Folkestad on twitter. During that time I’d come across the trailer for his then-upcoming game, you guessed it, Embracelet. I watched the trailer and originally had given the game a pass due to the premise being a “coming of age story”. So when I was offered the review for the game I thought to myself, wouldn’t it be funny if the first game I reviewed for Player2 was a game that I originally passed on.

I figured that the best way to review Embracelet for the Nintendo Switch is to play in handheld mode. Sitting at my computer desk and relaxing by putting my feet up I slowly make my way through the game. The opening sequence has our hero the 17-year-old Jasper meeting up with his ill Grandfather at an elderly home. Shortly into their discussion, Jaspers Grandfather asks him to take his secret magical bracelet and return it to its rightful owner. The bracelet has the power to move objects and Jasper simply can’t believe that it is real.

Now we have our main objective for the game, to return the bracelet to its rightful owners. Your grandfather never found who it belonged to but tells you that you will find answers in his home town of Slepp. Curious I fumble through the first part of the game trying to make my way to the town to get some answers. Once you arrive in the town of Slepp the adventuring aspects of the game start appear. Here is where the need to examine everything and talk to everyone to understand your new environment comes into play.

I’m not a huge fan of games which require you to inspect a ton of environmental items. This method of exposition sees the characters have some inner dialogue about the items to relay information to the player.  Something about it seems so slow and tedious, an issue I had with Life is Strange and the more recent Tell Me Why. It doesn’t make them inherently bad by any means but it certainly is not my favourite story-telling method. That bias aside Embracelet manages storytelling through item descriptions in much the same as the previously mentioned titles,  just without any voice acting to back it up.

Without any voice acting the game still manages to engage you most of the time with the use of cinematography during cutscenes and character dialogues. I was impressed by the different uses of shots and camera angles to spice up what is just two characters conversing. When there were options to choose during a dialogue I would often try to pick the “right” answer. Unfortunately, there are no branching paths in the story and most characters will just say slightly different things to you if you pick “wrong”. Your choice has no consequences. This made me feel that there was no reason to have the choices at all. I’d rather watch the linear story play out than have pseudo choices that don’t matter. This is quite contrary to most games in the same genre which often emphasise “YOUR CHOICE MATTERS!” and “characters will remember that”. It takes the urgency of making the correct decisions away and lessens the impact of the story.

I found myself often playing for around 30 mins before putting the game down and moving on to something a little more interesting. Only finding the hook around an hour or two into the game when the story started to heat up. Before that I was simply exploring the island of Slepp, meeting the strange few people that inhabited the island and solving some minor puzzles. One of those puzzles requires you to fix the power to a house and has the 17-year-old protagonist shoving their hand into a transformer box to do so. Something of an extreme and dangerous solution, that felt out of place when compared to solving other puzzles in the game by simply moving objects with the bracelet. When I reached the halfway point in the game I found myself trudging through the dialogue and wanting to get to the climax as soon as possible, which isn’t exactly what you want to experience. Talking any further of the story will dip into spoiler territory so I will leave it here to avoid ruining the experience for anyone who is still keen.

Embracelet is a one-man developed game which excels in many areas but failed to completely engross me from start to finish in the same way as games in this genre have done before it. It is a short fantastical coming of age story which tackles a range of adult themes but doesn’t stick to any for long enough or in enough depth to make them meaningful. Lovers of the genre might enjoy the game and the flexibility of playing it on the go and therefore may get more out of it. Sadly, the game is severely average and doesn’t stand out among the crowd of similar games in the young adult magical adventure stories genre.

Kyle has been interested in gaming for most of his life. Spending the past 10 years as a hobbyist content creator across multiple platforms. He started live streaming before twitch existed and now he’s trying his hand at writing reviews for all those games he plays.