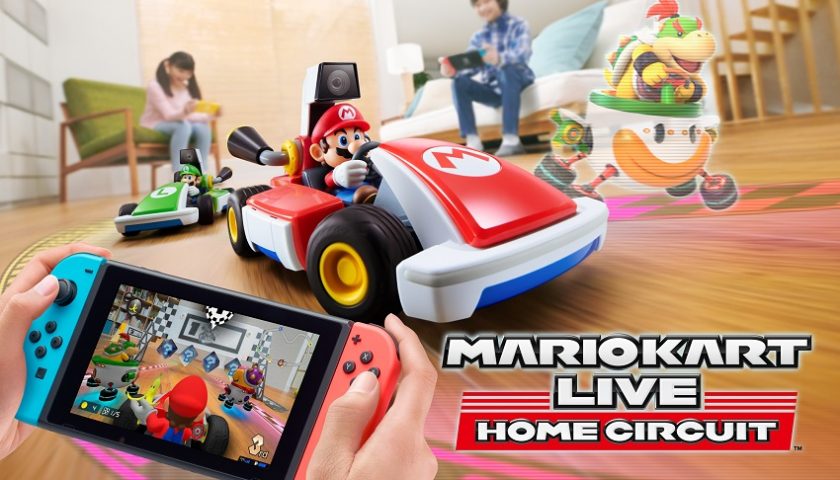 My son approaches me with hopeful enthusiasm. His eyes dart to the kitchen bench, where Luigi sits in his kart, arms eternally extended and ready to race. An all-seeing camera hovers above his green, L-stamped hat. I dare pouted lips and tears to refuse my son, but there’s a problem – when do I get a go?!

My review of Home Circuit follows not the expected path of provided numbered gates, the suggested and correct user experience, but instead the carefree, open exploration of our home by my wife and son, their combined giggles echoing throughout the house while this writer watches on with phone in hand to capture such moments.

Out of the box, the kart connects with the freely-download software almost immediately. All you need do is hold the Switch’s screen before the kart’s camera, whereupon a QR code does the work of handshaking to your console. It’s a disorienting moment, seeing your kitchen from the low viewpoint of the kart, and then, upon pressing the accelerator, an almost unbelievable sense of speed as you zoom beneath kitchen chairs, behind lounges and under beds.

Watch the kart itself and it travels sedately, safely, able to dart left and right with ease. Set up the provided gates (four of them) to create an AR Mario Kart race and the speed is phenomenal, as overlaid track sides blur past and virtual opponents knock into you. Alas, this mode was largely denied me as it soon became clear that the coin-collecting shenanigans of the intended game would be left adrift, abandoned for the pure delight of driving up to my son’s favourite toy and squealing as Toby’s dark eyes loomed large on the Switch’s screen.

There are lots of impressive little things that happen even during free exploration mode. Crash into a skirting board and Luigi reacts with a cartoon animation that suggests mild whiplash. Drive over a small bump – such as from floor to carpet – and he will bob a bit and do a little vocal exclamation. There’s an amazing amount of fun to be had just using the kart as a mounted camera that streams to your Switch.

As a videogame, the experience is impressive, if not particularly deep. Setting up can be as involved as you want it to be, from simply plonking down the gates and a couple of direction signs through to fully organising a space in your house around a custom track, requisitioning household objects as bumpers and guides. Then it’s a matter of doing a setup lap, rolling through each gate, checking that you’re happy with the course that comes up on the screen, and you’re ready to race. Lakitu shows up as a starter, along with Bowser Jr and a bunch of Koopalings as racing opponents. The track then gets populated with question boxes and coins, providing an almost normal MarioKart race – except there’s your coffee table in the background.

You race your track over a few laps, replete with boosts, banana peels and so on. The sense of being bumped is impressive, with the kart stopping or slowing down according to the virtual race. Speeding up from 50cc to 100cc and 150cc is positively terrifying as you see your furniture loom large at corner edges, narrowly missing chair legs, carpet edges and other household ephemera.

While the single-player is enjoyable for the first few races, particularly as you collect coins to unlock hats and vehicle overlays (my son always asks for the yellow digger), it soon becomes clear that the experience is designed for a multiplayer situation. This is where the cost of organising a proper race starts to become excessive, as you require separate karts and switch consoles for each extra racer, up to four in total. I only have one local friend with a Switch, and I doubt he wants to buy the whole pack just on the off chance that we might want to have a fang around my kitchen, but you might be in a different situation and have regular Switch parties – hey, I’m not here to judge!

As a technical showpiece, Mario Kart Live: Home Circuit maintains Nintendo’s uncanny ability to produce immediately impressive experiences to show off to friends and family. The fact that my wife – who is not into gaming at all – is able to share this delight with my son is worth any price, and it doesn’t matter if they never use it in the intended way.

I’d love to be able to capture pics from the Switch itself, but unfortunately, this option is permanently locked. However, I can understand the reasoning. It only takes a few seconds to imagine how a portable camera might get abused by dickheads, but the loss of snaps that feature giant toddler hands reaching for Luigi is regrettable.

I’m very impressed with the battery life of the kart. Nintendo’s estimate of around three hours on 50cc speed sounds entirely achievable. Whether or not that battery life persists over time remains to be seen. However, the Switch console itself is very good in this regard. It has not developed a charge memory for me yet and I keep the thing almost permanently in the dock when I’m not playing.