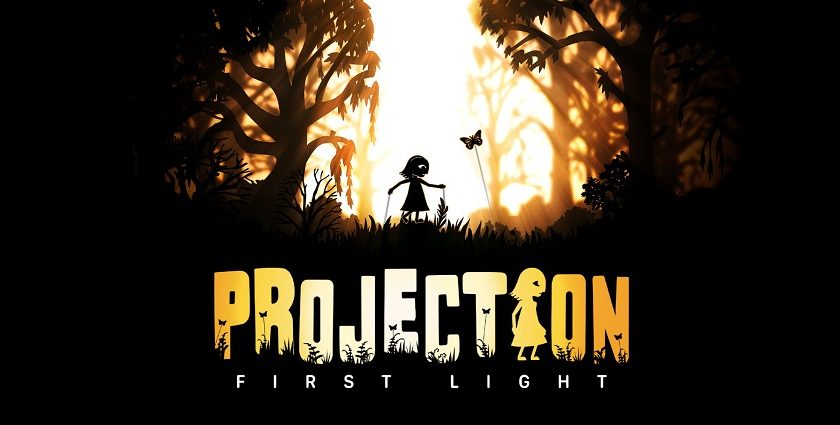 So, I should level with you – puzzle platformers aren’t necessarily my jam. Though I’ve tried many out, they’ve never gotten their hooks into me the way either a puzzler or a platformer does. So when I was given Projection: First Light to review… I had to approach it with an open mind.

Projection is a puzzle platformer which is focused on solving puzzles through the use of light, as you take the character of Greta on a journey of self-discovery. The opening sequence didn’t sell me on her as a character worth cheering on – particularly as her misadventures didn’t paint her in a sympathetic light to me.

Seeking the exit for each level may sound straight forward, but it’s certainly not a doddle. The challenge comes from needing to use your Light source to cast shadows in order to negotiate the obstacles in your way. When starting out, the puzzles are gentle – focusing on bridging gaps and building ramps to reach higher ground. I found this was a great way to introduce what Projection expects of you, even if things ramp up at a relatively slow pace.

I can’t help but feel it’s due to how stages are structured. Projection takes place across 4 locales – Indonesia, China, Turkey and London, with the bulk of the levels split across those first two. It wasn’t until I reached the China levels that I started to see the mechanics expanded upon, starting with the introduction of lamps which act as secondary light sources. The Turkey levels introduce sections which require a number of objects to be found before you can move on, alongside ones where you’ll move objects onto pressure plates to open doors. These all build upon the basic light and shadow mechanics, and the interplay of which was something I rather enjoyed.

That leads me to what was my main source of frustration: the precision needed for some of the puzzles. Projection can be played with either a gamepad, or a keyboard & mouse, and it was the former which I used for the majority of my time. But for some puzzles, particularly ones with moving lamps, or where you nudge an object to a particular location that the precision required just wasn’t available through the gamepad.

After many, many attempts ending in frustration, the best I could do was switch over to the keyboard and mouse controls which were far, far more precise. Though of course, depending on which platform you’re playing on… you might not have a choice but to stick with them.

I also found the last sequence in the game to be a frustrating challenge as well. You’re on the run in this one, and being caught results in you being sent back to the start. Quite unlike the rest of the game which allowed you to tackle it at your own pace. I eventually got through it with the help of the game’s lone Accessibility option – that being able to adjust the game’s speed.

Despite all this though? I enjoyed the puzzling. Nudging an object to the point where physics would see it land right on target was especially rewarding. As was getting the timing of things just right to get past a tricky sequence or safely reaching a hidden Butterfly. Collectables are optional, but the goal with these items is in working out how to safely grab them and get back on track making for an additional challenge for players willing to take it up.

When diving into Projection: First Light, I wasn’t sure what to expect. In the end, I found myself growing to find its mechanics made it worth playing. It offers a unique twist on the formula, with some mechanics I found were truly interesting, even if they had some rough edges around controller responsiveness and collision handling.

The only area I felt disappointed was in the story, delivered through a series of non-verbal cutscenes. Whilst it’s thematically appropriate given the visual style, I found it difficult to connect with what was happening at times. Something which sadly impacted how I felt about the experience, particularly with those longer earlier chapters.

More than anything this could certainly be a subjective point, as it’s something which others may connect with in ways which I couldn’t. Ultimately, that’s where independent games like Projection truly stand out amongst the crowd, by offering experiences different to the norm. Experiences offering more diverse settings and stories which can bring wider audiences into the crowd

Projection was reviewed on PC with code kindly supplied by the publisher.