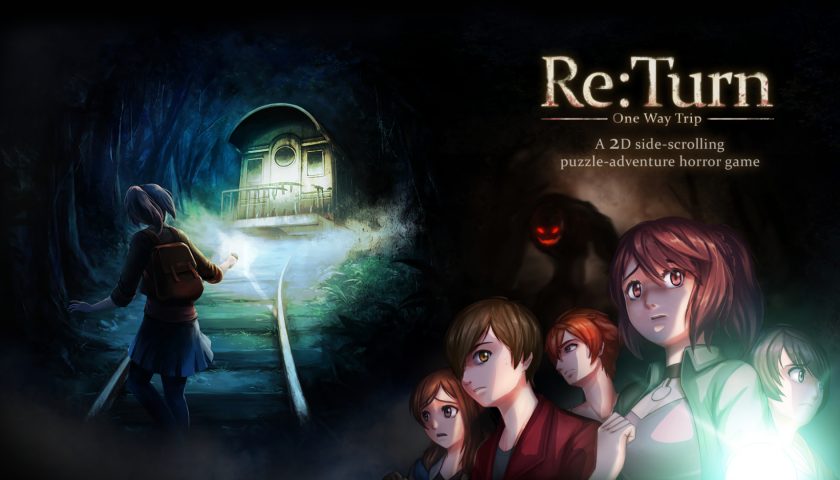 Re:Turn One Way Trip – For The Love Of Fear

The lineages of the point-and-click adventure games are easily traced on the tracks of time from yesteryear as they have seemingly reanimated themselves into visual novels these days. Taking cues from those that came before and running it through ‘the new’, Re:Turn – One Way Trip blends the two genres in a modern way. The simplistic visual novel aesthetic fused with streamlined point-and-click puzzles plays to the game’s favour as it enables its story to descend into its enthralling horror overtones. While at a book-cover glance Re: Turn might seem blasé, there’s a decent amount of subtextual and thematic messaging, across timelines and intertwining character narratives that surprisingly, pulled me in.

Love and fear are the themes explored in Re:Turn. Not strictly through their individualistic and overt presentation by the narrative but rather the weaving of the two emotions holistically. The way they entwine each other through loss, heartbreak and personal change is shown through converging stories that are built and chipped away at, chapter by chapter, driving your curiosity. There’s a great sense of mystery at hand on the rundown train, given the time-shifting and the implicit tragedy that ensues. Our cast of characters begin their journey in grand horror trope fashion; a fireside friendship that is extinguished, yearning for rekindling. Though upon arrival at the train both the player and Saki are thrust into an engrossing assembly of Japanese inspired horror, set on a backdrop of mystic time-travel.

Presenting the story through a visual-novel lens means it’s inherently reliant on dialogue-based prose, which at times are a little ham-fisted in sentimentality. Although across the entire experience, accounting for such a large cast of interlocking stories; the narrative is effective in expressing the previously mentioned themes. Especially so in how Red Ego Games have skillfully transposed a horror tone over this spider-web of a story, all without losing clarity but enticing you further down the tracks of madness. It’s a tone that dutifully juxtaposes and drives Saki to reunite her group of friends amongst the onset of the horrific.

There’s a metric I tend to judge horror by, it’s called the ‘nope-factor’. Nope-factor is almost what it says on the tin, the atmosphere is stirring; you begin anticipating the scare but it just won’t happen and so you’re locked in place until you finally crack and nope out of the experience by way of Alt+F4. Re:turn – One Way Trip admittedly triggered this for me a couple of times. Now running through the same environment would usually become too familiar and dull. However, in Re:Turn, it’s a testament to a great level of execution in its spooks because the ever-changing state of things never lets you be complacent. As the horrors hidden behind locked doors do dwell deliciously in one’s delirium. Re:Turn’s atmospheric abrasiveness is owed in two parts to the impressive sound design, including the uneasy ambience and accompanying unexpected, yet logical happenings. Jump scares are at play here but they are earned through eroding your sense of control, bubbling fear for long periods to a payoff through its beautifully dread-inducing pixel art.

Blood soaked walls with claw marks and destruction of the once elegant, every section of the train seems to offer new ways in unsettling you with a graphical style that doesn’t usually lend itself to overt horror, yet here it does. The claustrophobia injected into the experience is key to setting you on apprehensive footing. As well as the animated, unpixellated art being quite astonishing too, particularly the skeleton in the bathtub being oh so grotesque. Nonetheless, across the entire game, from environmental to character, all the visuals are top-notch. The blending of differing styles along with little animations that characters go through is superfluid. It’s just all so life-filled with passion, heart and soul from the team. I will say though, the blown-up character’s during dialogue could’ve been more expressive to help convey heighten emotions at times.

The third part of the game, the point-and-click puzzle game, is somewhat contentious in my mind. Some of Re:Turn’s best puzzles are the ones that make you reconsider the objects you’ve collected in accordance with changes in the environment and interfaceable areas. There are also side puzzles or gag-solutions to uncover too, among a secret early-ending. Together these create a realised ‘world’ that becomes less artificial the more you discover. I also like the emergent way clues are introduced to the player through little drawings and poems. It’s an eerie way in characterising the key players in the story through discovery and gameplay. However, the broad problem the game suffers from at times is that infrequently, when a puzzle may become obtuse, it reverts to point-and-click game problems of trying everything on anything; slowing the pace dramatically. This isn’t an overbearing issue as most puzzles are fairly logical but hitting this type of wall is unfortunately dull.

When all is done through and the train has reached its destination, you’re left with a pretty satisfactory experience. One that has some highs in regards to its horror-expression, puzzle application and densely woven narrative. Albeit that Re:Turn – One Way Trip never quite reaches an awe-inspiring level with these elements. Don’t get me wrong though, they commendably blend well together to create a tenuously interesting story to navigate. One that is definitely worth a ride to the end-of-the-line.

Re:Turn was reviewed on PC with code kindly supplied by the publisher.

Outside of games Harrison enjoys a decent science-fiction or philosophy read and welcomes any recommendations. Inside of games he wants you to know he never made it beyond Rock Tunnel in Pokémon Yellow because the cave is scary and he doesn’t know where to get HM-Flash.