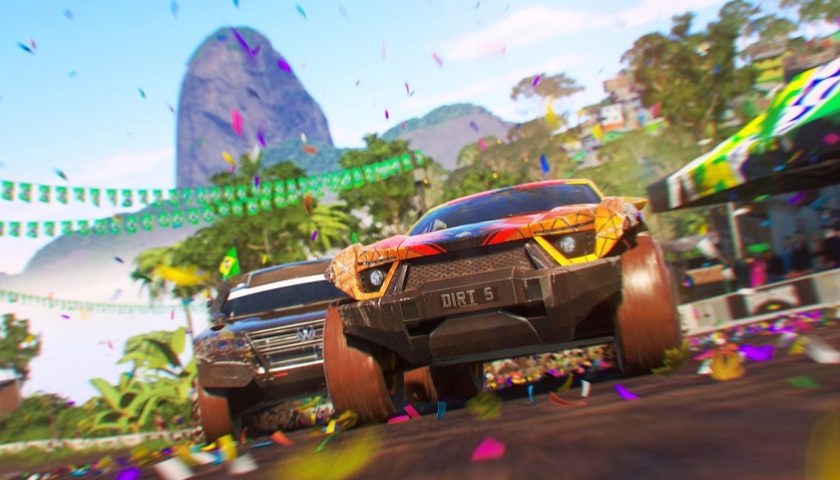 Take a look at the format information above. I never usually need to worry about such specificity, but Dirt 5 is the first title this generation that truly feels like it does not belong on a base Xbox One S console. Reportedly, the game runs much better in One X and PS Pro, but if bereft of such beefy boys, I’d suggest waiting to play this on the next generation. My experience was such that the game bordered on unplayable, with frame rates that dipped so low my opponents looked like stop-motion animations. I also found the game’s photo mode to be completely unusable on my console, with visual glitching making it impossible to navigate the menus, as well as general freezes whenever I would enact the mode. Which is a shame, as I like a good photo mode. This article, therefore, can only reflect my experience. I’m sure the game runs butter smooth in the new consoles, and it may well be a title you’re keen to pick up on them.

Dirt 5 is a full embrace of the arcade festival approach. You won’t find co-drivers, hill climbs or split gates here. It’s all about racing around crazy circuits with a bunch of other cars. If anything, it reminded me a lot of Motorstorm, though much less open with its tracks. You are pushed into racing quickly and without fanfare, while banter provided from what I presume are known names in the driving world plays out to explain the various disciplines. Oh, and there’s also Nolan North and Troy Baker, for some reason. These last two didn’t need to be there, but hey, they’ve gotta keep working I guess. You burn through a variety of courses covering disciplines I could not tell you the names of if my life was on the line – know only that you get to race on ice, you get to drift around a mine site and drive huge tractor-like monsters on some very cool (yet difficult) pathfinder tracks.

Variety keeps things interesting, with arcade handling that almost feels like the game is driving for you. Drifting is easy, simply tap the B button and you’ll sling around corners like a pro, with no fear of under or oversteer. This is not a simulation, that arm has clearly been saved for the Dirt Rally series. As you progress, you unlock money, reputation and livery items. I didn’t realise I was earning money until I had over half a million dollars and realised I could buy a few new vehicles. You can take on advertising contracts, fulfilling certain requirements for bonuses, but really that stuff doesn’t feel at all important. You can just keep pressing A on each race and be none the wiser of your reputation or bank balance.

I found the difficulty on normal quite a challenge, but this wasn’t an issue because even if you don’t come in at the head of the pack you still earn rewards. Opponent AI is fairly sedate and non- aggressive, and even if you do trade paint, the damage is only visual, so there is no penalty for slamming into each other and using the pack’s momentum to get through corners. It was during the more crowded track moments that my console really struggled, so I found myself pushing the difficulty down just so that I could quickly get ahead and enjoy the track to myself without the experience becoming a slide show.

The other main draw is Playgrounds. This mode lets you build and share your own creation, as well as play and rate other players’ courses.there are already some cool courses available and I think if the community hangs around, this mode will be where a lot of the game’s longevity exists.

Visually, the game can be stunning, and I’m sure it will be more so on next-gen consoles. Track design is impressive, with patches of bitumen poking through on muddy tracks, pools of water and some of the most exciting terrain during the Pathfinder courses. Weather and day/night also cycles during some races. It can be a thrill to start a race in the sunshine and then have the weather turn to rain for the second half, or to have the sunset and finish racing in the dark, headlights beaming ahead to make familiar tracks feel completely different.

While Dirt 5 doesn’t stand out in any particular area, it offers a straightforward arcade racer with rally influences. Everything feels slick and smooth (apart from the frame rate), with quick-fire races where winning hardly matters and the next course is but a load screen away.

*Stay tuned for Dirt 5 impressions on a next-gen system as soon as possible. Code for Dirt 5 was kindly supplied by Koch Media Australia