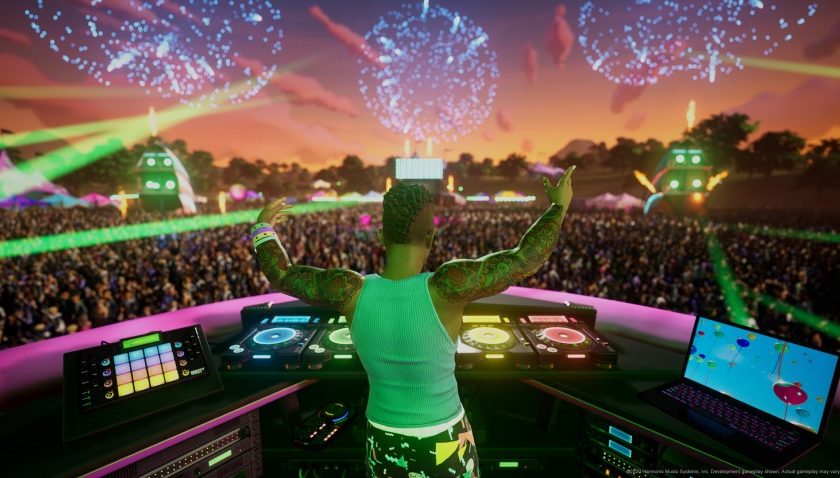 Fuser – From DJ Zero to Hero

Having ushered in a rhythm revolution (at least in the Western world) with 2007’s Guitar Hero, developer Harmonix spent the next decade refining that formula to culminate with Rock Band 4, one of the last peripheral based rhythm titles before the genre well and truly fell out of fashion. In the ensuing years, it would seem Harmonix’s attempt to create a rhythm board game in Dropmix has now taken them full circle with Fuser, a title which lifts the concept of Dropmix – lay down individual tracks from a handful of songs which are automatically synced together – and turns it up to 11.

DJ: The Card Game: The Video Game isn’t exactly the most compelling of titles though, so Fuser is a welcome moniker which succinctly captures the main gameplay loop – select a bunch of licensed tracks, fuse their individual elements together, score points – a rhythm track here, a vocal track there and the underlying programming will ensure it doesn’t sound like a cat being stretched across a tennis court. This is where the similarities between Fuser and Dropmix end however; the latter was fairly simplistic and I had a few days of fun before it wound up in a cupboard as a curio I later sold on, whereas Fuser slowly reveals an incredible amount of depth as its many layers are peeled back.

The Campaign Mode is the first cab off the rank in Fuser’s main menu and offers almost 40 levels designed to introduce players to the vast array of modifiers and sound manipulations elements that would be quite overwhelming if not doled out in this fashion.  Things start off easy enough with a character creation screen before introducing what must be some of the most insufferable story sequences, replete with hammy writing and performances, I’ve seen in quite some time. The gist of Fuser is that the player character is an up and coming DJ who needs to prove themselves before earning those headlining slots on the main stage. Sounds fine in theory, but in practice the whole story aspect comes off so badly I have to think Harmonix are taking the ultimate piss and the entire narrative is some A-grade Galaxy Brain trolling on their part. Fortunately for Harmonix, what they have running under the hood of Fuser is truly impressive from a technical standpoint and overrides these concerns – skip the cutscenes, because the gold is in the gameplay.

Things start off easy enough – load up a ‘crate’ of songs and play to a crowd who will occasionally throw out requests while a festival organizer shouts ‘advice’ from the side of the stage which become goals players have to meet to pump their score up and in turn keep the crowd happy. In order to accomplish this, each song features four separate tracks mapped to the face buttons. Grab the vocals from Smashmouth’s ‘All-Star’, throw in the percussion from A-ha’s ‘Take On Me’ and the strings from ‘Call Me Maybe’ and you’ve got the beginnings of…something? The opening sections of the Fuser campaign very much encourage reactive play – the organizer tells you to drop the vocal line from ‘The Sign’ by Ace of Bass? Easy. A crowd member wants to hear some early 2000’s rap? 50 Cent is here to help. It’s the earliest stages of any rhythm title before things become muscle memory and partway through I was concerned Fuser was going to lack any longevity if this was its foundation – basic reactive play that felt slow in comparison to other rhythm titles, which is right when Harmonix peel back those layers and expose the depths below. Halfway through, not only do I have to ensure I’m only swapping or dropping tracks in on beat, but I’m cueing tracks, creating short loops, soloing, muting, fading, changing BPM and even shifting keys.

Slowly throughout this process, my engagement with Fuser starts to shift from reactive to proactive. I’m making conscious decisions in regards to the way each track is layered, looking for opportunities to squeeze in a section of a song outside of meeting a goal and appreciating parts of songs that I’d not paid attention to in the past, even ones I knew quite well before playing Fuser. As a dyed-in-the-wool rhythm game aficionado, I feel confident in saying that Fuser has a unique approach like no title I’ve played before, whether it be Guitar Hero or DJMax. Before I know it, I’ve even stopped handcrafting my ‘crate’ of songs, preferring to randomize so I can discover pairings I would never imagine. When the ‘goals’ set by the organizers are now interfering with the way I want to play, the Freestyle mode kicks in; no rules, no goals, just a ‘crate’ of songs and some creativity. Weekly Online Challenges supplant the Campaign, shifting goalposts to keep me on my toes whilst also unlocking exclusive gear and sheepishly encouraging the purchase of more tracks. My early fears around longevity are dashed, Fuser showing just how long it will last – as long as I want it to, bringing to mind the likes of Forza Horizon and a bevvy of other games that never truly end, but are instead abandoned by players pushed towards newer releases.

Harmonix has always been a studio whose love for music infuses every title they’ve had a hand in. Fuser feels like the first time they’ve finally found a way to guide players towards engaging with said music on a deeper level than other rhythm titles, but in the process may turn away anybody who solely desires to recreate songs on plastic instruments or is hell-bent on chasing high scores while notes drop at blistering speeds. Whatever your preference, if you love music, Fuser is worth investigating.

Fuser was reviewed across both PlayStation 4 & PlayStation 5 with code kindly supplied by the publisher.