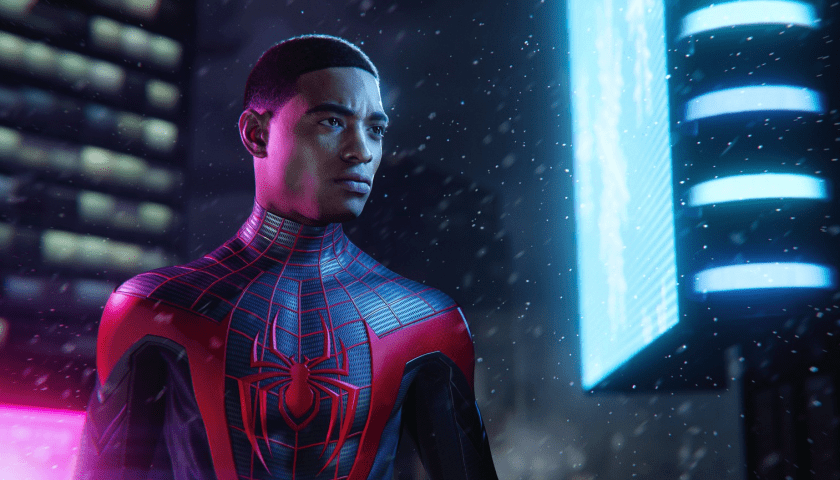 The motto for Marvel’s Spider-Man when it launched exclusively to the PS4 in 2018 was a simple one, “Be Greater”, and it was a motto that was as indicative of a cultural stance at Insomniac as it was indicative of the studios desire to make Spider-Man 2018 better than any previous video game adaptation. A large school of thought will suggest that Insomniac were successful in that endeavour, but internally, the studio again strived to be greater, and with the release of Spider-Man: Miles Morales, they’ve done just that.

Set shortly after the conclusion of the last title, life has temporarily pulled Peter Parker out of New York City for a while, and as such, his young understudy, Miles Morales is at the helm. Miles hasn’t yet “earned his stripes” with the locals, and, in some corners, is considered to be a second-tier Spider-Man, but when warring factions, The Underground, and Nexxon up the ante on their battle, conveniently during the period of Peter’s absence, it’s down to Miles to step up to the plate. Over a 6.5 hour long campaign, that is then padded out somewhat with collectibles and side-stories to engage in, you the transformation of Miles from the raw, and somewhat unreliable Spider-Man, still learning the ropes, into the confident, dependable, and consistent hero that he needs to be. His transformation isn’t just as a hero either, Miles’ relationships are put to the test, as he grapples with the implications of a revealed identity, saving the city whilst also protecting those you love and the tug of war that you must tussle with in order to keep the city going. Though a short ride, the rollercoaster affair will keep you hooked throughout. It was somewhat disappointing to see that the threads to an inevitable Spider-Man 2 that were teased in the post-credits scene in the last game weren’t really developed any further in Miles Morales, with us knowing about as much of what is to come as we did before, making this entry a fantastic, but ultimately still skippable entry in the overall timeline, which is a real shame.

The game does touch on some important themes, friendship, home, family, and how we respond and recover from grief, and it does so incredibly well, especially given the game’s brevity. Though not explored perhaps as deeply as it could have been, there are also some nods and references (some subtle, others more obvious) being made to the Black Lives Matter movement, and it was great to see Insomniac emphasising Miles’ (as well as other key characters’) backgrounds throughout the story and around the world as you explore it.

The skeleton of the Miles Morales gameplay experience is going to be immediately familiar to those who played the 2018 release, though of course with a new lick of paint to make it pop. NYC looks gorgeous, and swinging through it feels as exhilarating and oddly natural as it did in the last title, but it’s Miles’ Venom Powers that make this new game stand out when compared to its predecessor. Miles’ bio-electrical powers begin to manifest through the duration of the game and these continually reinvent the way you approach combat. On the more basic end, the addition of the Venom Punch (and other variants) gives you some harder hitting strikes, capable of stunning and flooring opponents big and small. The camouflage ability provides you with numerous more stealth and crowd control opportunities, allowing you to silently pick off opponents, or to disappear amidst a busy crowd of attackers and get a breather or even the jump on a particular enemy who is causing you some grief. Each of these abilities can be empowered and tweaked courtesy of skill points that can be applied to Miles as he levels up and through mods that can be equipped to your suit. Few are game-changers (except the fabulous mod that that be applied to your suit/s for the Enter The Spiderverse animation effect), but will give you extra little perks that might then suit your combat approach or buy you some time.

The addition of these features, layered atop the brilliant backbone created by the original title, makes the combat of Miles Morales far more varied and enjoyable than its predecessor. Slower, more laborious stealth segments that were a part of the original title have been axed ensuring you’re always moving through the world with a degree of momentum behind you. Miles also has access to a “Friendly Neighbourhood Spider-Man” app on his phone which notifies you of crimes taking place around the city as well as other key objectives to complete. Like its predecessor, there are plenty of collectibles to round up, though they’re not quite as large in number and are gradually rolled out to you so as not to bombard your map with things to do. Pacing is this game’s greatest strength, and it’s on show through both the narrative and the gameplay lenses.

Being the centre-piece Sony’s next-gen push, but ultimately also available on the PS4 as well, Miles Morales looks exceptional but also plays it quite safe in some areas. The world and those within it look stunning, but the Dualsense implementation, while effective, is far more subtle than what you’d expect of a game exclusive to the PS5. The world looks stunning, and with the game straddling both daylight and nighttime more than the original release, Miles Morales does take advantage of the different times of the day to use light in fantastic ways. The reflections of natural and artificial lighting and implementation of ray tracing make the environments shine on the next-gen hardware, while the facial animations and voice-acting both look and sound right on the money. Miles is a music aficionado and it shows through in the game’s soundtrack, with the game leaning more heavily on hip-hop beats to create a really engaging background atmosphere.

Miles Morales is a wonderful step forward for the franchise, successfully building on the foundations established by its predecessor. Though only an evolution and not a further revolution to the Spider-Man formula, Miles’ journey is full of heart, is riveting to play through and a joy to just kick back and immerse yourself in. Though it’s disappointing that the game is as short as it is and doesn’t progress the overall narrative in any way, it’s hard to argue with the fun you’ll have just swinging through the world. Whether you’re playing this on the PS4 or the PS5, this interstitial act is not one to miss.

Spider-Man: Miles Morales was reviewed on the PS4 with code purchased by the reviewer.