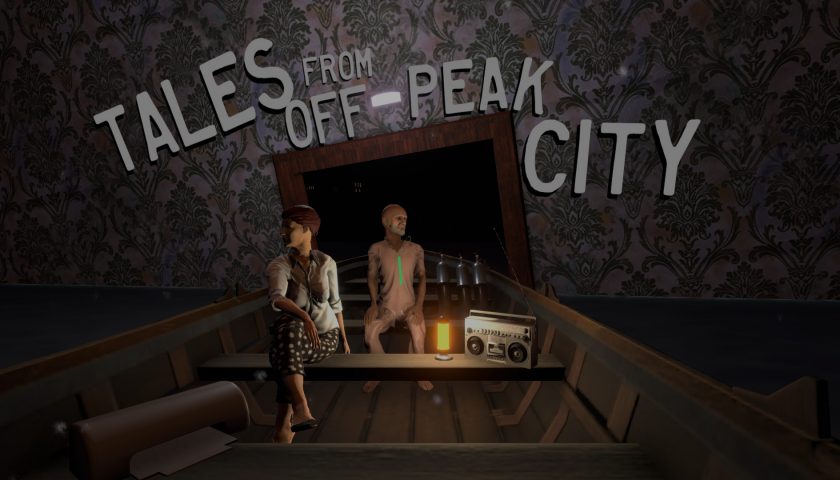 Everything I’d heard about Tales From Off-Peak City had me expecting a hallucinogenic drug trip – or, at the very least, a dream-like experience. “Woah dude, you’re never going to guess what’s in this game man!” These descriptors are, to be honest, a little unfair. They come with the connotation of being “random” and “unexplainable”.

Off-Peak City is definitely a surrealist experience – talking buildings, odd paintings, physical structures that wouldn’t exist in reality – but the intersection of July Avenue and Yam Street is surprisingly grounded in reality. If anything, the way The Discourse has shaped around Tales From Off-Peak City unearths just how far removed we are from anything even slightly off the overly beaten path in our current age.

In the early goings, it’s easy to feel like everything is just weird for weird’s sake. I was constantly questioning everything. Why are the buildings so curvy and – wait – some have faces? What is the significance of the cows? Grey matter on pizza?

As you acclimate to the surroundings, these questions take a back seat. Let’s be honest – we look passed a lot in the video games we play. There’s a certain level of suspension of disbelief required in just getting in the door with just about all interactive experiences. TFOPC might have a higher barrier to entry in this regard, being of a more surrealist nature, but that makes what it’s saying no more difficult to grasp. If anything, it makes its message even starker.

The heightened bizarreness serves to highlight the very deep humanity within TFOPC. If you simply take your time wandering through this microcosm of a neighbourhood, listening to its people speak, the idiosyncrasies fall away to reveal very real, very straightforward truths. Roommates discuss troubles with their landlord. A hawker of street wares, wistful for a time long past. The small business owner in a unique position between neighbourhood connections and corporate takeovers.

These aren’t just people posted around to serve a story purpose. They are a neighbourhood, a history, a group of people all interwoven within each other’s lives. That Tales From Off-Peak City can convey this with an entire cast of characters in its roughly 2-hour playtime speaks to how when we treat people as human beings, the world suddenly seems so much clearer.

Tales From Off-Peak City bears a few simple mechanics, aside from walking interspersed with lock & key progression: pizza making and photography. When making pizza, you have a variety (emphasis on variety – sauce, mozzarella and salami sits alongside brains, worms and chocolate) of ingredients that you can dollop around a base, before cooking and delivering to your next destination. You gain access to a camera near the very beginning, which – you guessed it – lets you take photos with a selection of artful film types.

Other than giving you things to find in the environment, both serve literally no actual function in the game whatsoever. There is no fail state where your pizzas are unsatisfactory or your collection of photographs are graded. Instead, they simply provide you with a sense of your impact on the world and how you relate to it.

People you deliver to will comment on their interpretations of your pizza construction. Pictures you take can be hung up around the pizzeria. The game simply gives you an opportunity to leave your mark on the world in only an artistic fashion.

To express yourself for the sake of expression, to simply enjoy the act of doing rather than in search of a reward is as important as the game itself. And it is not just key to your mechanical relationship with this game but is something that runs through every facet of TFOPC.

As is abundantly clear as soon as you boot up Tales From Off-Peak City, creator Cosmo D is a prolific Jazz musician. Jazz flows through every inch of their interactive creations. From mood-setting tracks across the space, to the twangs and beats of laying ingredients out across pizza dough.

Not simply skin deep, this extends to the core philosophy of TFOPC. At the heart of this game is a push and pull between small community and big business, the hyper-local and the broadly monolithic, the essence of humanity and the encroachment of advanced capitalism.

TFOPC serves as a treatise on the extent to which our lives are being all consumed by forces of business, and how spaces of the community are emulated and replaced by faceless branding and corporate structures.

It’s easy to dismiss Tales From Off-Peak City as simply a strange game produced by a strange mind. Our packaged up, consumer-facing, focus-tested-for-the-largest-possible-audience lives have left little room for that which appears different, to the point of making that which does not fit our norms feel utterly alien.

Surrealist art is so often overlooked for the superficial layer we may bounce off of. Don’t let the very human tales at the core of Off-Peak City be ones you ignore.

Tales from Off-Peak City was reviewed on PC with code purchased by the reviewer.