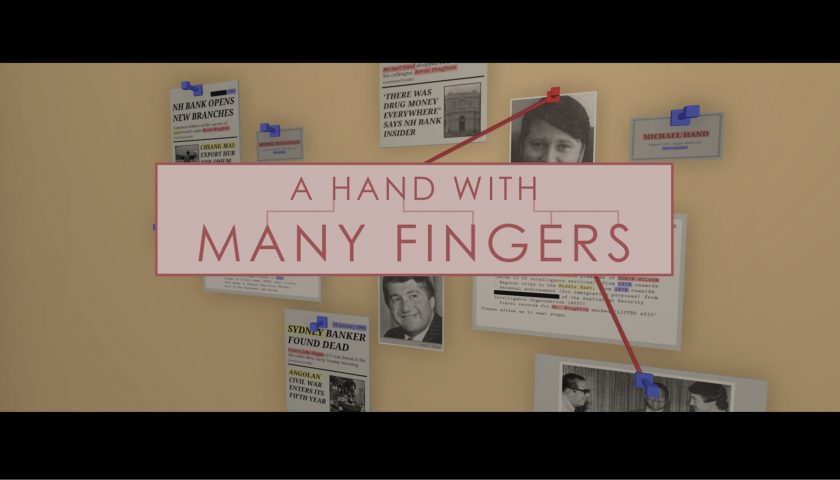 2020 Indie Spotlight – A Hand With Many Fingers

For all the outlandish and fantastical tales told in video games, sometimes it’s the ones built from reality that turn out to be the most compelling.

A Hand With Many Fingers is a short first-person game positioning the player as a research assistant in search of the truth surrounding a global conspiracy. Far be it from an extrapolation of a nugget of truth to a fantastical cold war thriller, AHWMF uses fictional snippets of information to tell a story about a very real worldwide scheme involving an Australian bank, anti-communist operations performed all across the globe and the tentacled network of the CIA in the 70’s and 80’s.

For a game about such high stakes drama, the actions you partake in finding this information can appear quite mundane. You’ll spend the vast majority of your time rummaging through physical archives in search of new information, moving from breadcrumb to breadcrumb while piecing together a web of knowledge in your brain as well as on an in-game corkboard. It may sound weird, but I can’t emphasise this enough – this is positively thrilling.

In the beginning, you simply have a few scraps of paper and a torn photo with a few key bits of information – Francis John Nugen, Sydney Australia, 1980. With this set of key information, you dig through a collection of name cards based on places and dates to reveal which of the hundreds of boxes of files are worth pulling out of storage and delving into. Each new box finds the perfect balance between the satisfaction of providing a few answers while creating just as many new questions.

It’s an incredibly clever system. While the game could technically be completed in mere minutes, a couple of hours will roll by before you find your conclusion, and those final moments only matter because you’re actually paying attention to what you’re reading. Through this system, a creator can more easily get you invested in a world and story. It’s why Outer Wilds is one of the best games of the last decade. A Hand With Many Fingers pulls off the same feat, thanks to its incredibly compelling tale.

I’d never even heard of the Nugen Hand Bank before today. Even growing up and living in the country this bank was based, the history of this structure and the people involved may as well have never existed. Coming out of this game, I’m now richer in the knowledge of the history of my country, while simultaneously having had a thoroughly engrossing couple of hours.

As is key to any good story, knowledge of the time, place and happenings is completely unnecessary – all that’s needed is curiosity and a willingness to discover the truth.

A Hand With Many Fingers helps put you into the mindset of the time period with fantastic ambience, creating a space positively dripping with cold war era paranoia. In the most mundane of spaces – an office building filled with rows and rows of boxes – the odd shift in movement and sound align perfectly with a growing sense of unease, like you’re digging deep into something that powerful people would rather stay hidden. Because, well, you are.

I was genuinely unsure of how my time here was going to conclude if I would even make it to the final piece of information. The best comparison I can make is the excellent Her Story, with its occasional sirens and the odd screen flicker. Through the smallest of flourishes, an atmosphere of paranoia is created just as much in your mind as it is on screen.

A Hand With Many Fingers not only taught me some history about a scandal spanning a worldwide conspiracy from not that long ago, but it also did so in the most engaging way possible. It even compelled me to want to research the events behind it even after the game was finished, going wiki diving and discussing the scandal with my partner afterwards.

Rummaging through boxes full of files sounds like the most boring thing you could do in an interactive setting, but it turns out it can be more rewarding than pulling off a quadruple no scope 360 headshot kill. Colestia’s Cold War thriller packages up the mundanity of decades past into an incredibly rewarding few hours, perfect for those who love uncovering truths hidden and long forgotten.

A Hand With Many Fingers was reviewed on PC with code purchased by the reviewer.