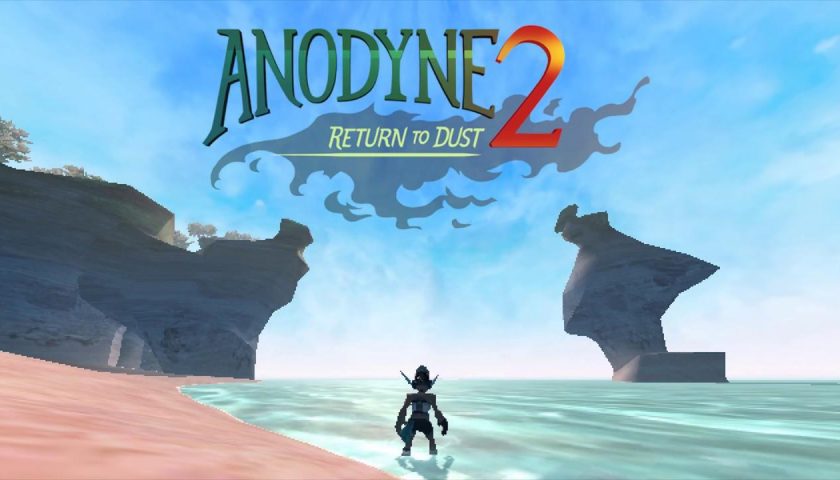 Anodyne 2: Return To Dust – If God Is Real, Should We Not Defy Him?

Ok, what’s the best way to approach this? It’s generally best practice to have the opening of a piece describe the thing I’m actually talking about. Probably a good place to start.

Anodyne 2: Return To Dust is a surreal 3D adventure game made by 2 person team Analgesic Productions. It pulls heavily on PS1/N64 era 3D classics like Zelda: Ocarina of Time and Resident Evil while following it’s original’s namesake in having you dive into 2D dungeons ala Link to the Past. A complex story about what it means to actually “live” will take you across a world of strange landscapes, introduce you to an array of odd characters, and have you follow a “hero’s” journey through the world of New Theland.

I know that’s what we do, but sometimes I do get why some people have this stupid notion that journalists are paid by publishers to write these reviews. It can feel so much like copy-pasted marketing material. But, that’s honestly the best way to convey to an audience that may not have even heard of the game what it actually is they are reading about. In order for you to come along on this journey of 1000+ words, you need to know the basics. Common knowledge between you and I are what helps forge that connection through this piece.

So, just a heads up: everything after the next screenshot is going to contain pretty heavy spoilers, or at the very least spoiler-adjacent interpretations of my experience. I can’t talk about this game without digging into this stuff, because every aspect of its design folds back into a particular ideology and perspective. I won’t be spoiling plot beats, but the ideas behind the game are talked about at length, so if you’re the type of person to prefer going in blind, you might not want to continue reading until after you’ve played the game.

I see my writing generally not as product reviews / “should I buy yes/no” pieces – there are hundreds of places you can go on the internet to find that – but as a critical lens to view and understand the art we consume. If you want a recommendation, then yeah, go buy this game and play it. It’s extremely interesting. Come back here when you’re done, then hit me up on Twitter with your thoughts. You’ve been warned.

Your “job” such as it is in Anodyne 2 is to find people infected with “dust” and clean it from their insides. This is where the dimensional changes come into play – initially you explore a 3D world, where the 2D “dungeons” involve you shrinking down to an atomic level into other beings and removing the dust that is causing them so much pain and suffering.

Among the residents of New Theland, this dust represents many things: desire, anger, depression. All aspects of humanity. The Center would have these facets of the human condition dulled, to the point of no longer being able to feel anything at all. To anaesthetise everyone to an anodyne state, if you will.

Inside the area of influence of The Center, beings are somewhat controlled by the idea that they must be subservient to their creator. These beings struggle against their desires, beating themselves up for falling into them in an endless downward spiral. They are said to be “infected” with dust, and only after being cleansed by an agent of The Center – you – do they fall back into being “at peace”. Not necessarily happy, mind you, but no longer – as the game posits it anyway – at the mercy of their humanity.

Almost every creature’s closing monologue after you have “fixed” them boils down to reasoning away their previous behaviours as something wrong with them. They are flawed, and only through the actions of their Creator can they become pure again. It puts the onus back on something else external, only something the pureness of The Center can alleviate – rather than taking responsibility and working through issues of the self to come out the other side a better being.

This way of thinking is decidedly harmful in Anodyne 2. In this religious context, to simply be subservient to a higher being is to allow outside influence to worm its way into your brain and cause you to do things that are against your very nature – to the point of being actively self-harmful – in the name of “the unknowable plan”. The ideology demands you live a certain way, and when you don’t, you punish yourself for going against that ideology. As a part of the very beginning of the game, the first action you take after being birthed into the world is to be literally implanted with a seed of The Center.

Anodyne 2 posits an interesting twist on the age-old “is God real?” question: even if He is, does that mean we should follow His doctrine? The Center is the creator of everything in New Theland. But if a creator gives it’s creation the option of choice, is the creation then required to follow the creator’s guidance, or should they be exercising their free will? Should they not be growing free of that influence and becoming their own beings, free to choose their own paths and destinies?

I always try to transition between topics smoothly, ending the paragraph before the next screenshot or beginning the first paragraph of the one after, with a hint of what’s next or a link to the previous point to keep that flow going. I couldn’t really think of a way to link this discussion of religious overtones with the other overarching theme I wanted to talk about – the meta-textual layers over the top of Anodyne 2 – so I guess this meta-paragraph is going to be the way to perform that transition for you.

As is now key to Anodyne as a series, the game itself is self-aware of its role as a video game. That is to say, creators Melos Han-Tani and Marina Kittaka often reach out through the game to talk about the game with the player. This applies in various forms. The facade can be dropped from an NPC’s perspective when transferring button prompts and other video-gamey related information. About halfway through the game, “meta-coins” are introduced as a collectable currency, which can be used to unlock a number of outside-the-game rewards. Little points appear all over the map with information about the development of the game, why decisions were made etc; as well as various test areas and cut content becoming available to explore through warping to them from a menu.

This serves multiple purposes. For one, It’s a cool way of performing a developer commentary on the game, from little informational tidbits to a peek behind the curtain as to how these digital landscapes are created. It’s also a reminder that these creations, these digital constructions that bring us so much joy, sorrow and anger, are simply made by people, just like you and me. It’s a reminder that people pour themselves into these projects, from the smallest indie to the largest AAA. The consumer-product nature of the media we consume may obscure that, but it’s still an immutable fact.

I tend to err on the side of the idea that it’s actually a good thing to know a little bit about how the sausage is made, in pretty much everything in life. To understand how much work goes into creating something helps one appreciate it that much more. That’s what this and every other piece I write is about, at least – giving you a perspective into the thing you may or may not be wanting to consume. I also put a part of myself into every piece – how can I not? I’m writing this from my perspective, built off the back of my life experiences and the thoughts that lead me to this exact place right now.

Anodyne 2, much like the previous game before it, is kind of a game about games. It’s also a game about a lot of other things – religion, free will, humanity. It’s a game that is the amalgam of what the two creators of Analgesic Productions wished to make, with its grand vision, it’s limitations and it’s fallible nature as a digital product. It’s a game that will pull on emotional strings, regardless of the context you bring to it.

I hate writing final paragraphs because it’s meant to somehow sum up everything you’ve talked about without just simply repeating what you’ve already said. The basic gist is this: if you haven’t already, you should probably play Anodyne 2. It’s a pretty fascinating game. So go check it out, yeah?

Anodyne 2 was reviewed on the Nintendo Switch with code kindly provided by the publisher.