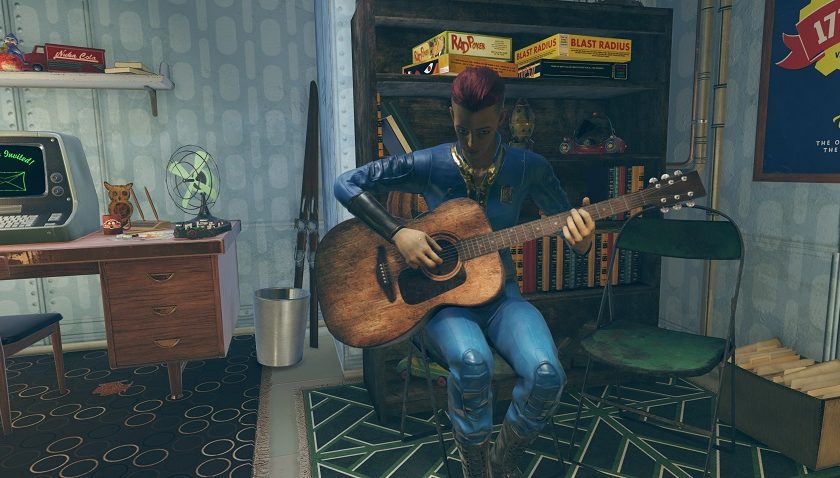 An unfortunate trend in this day and age is the release of broken and buggy games. It seems there isn’t a month that goes by without at least one anticipated title being released in a busted state. But all is not lost and with the wonder of the internet, a great game is often only some time and a patch away. This is where “As Time Goes By” comes in. We look at these once broken games a few months (or years) on and let you know if they are now worth your time, helping you decide once and for all if the game is finally something to be purchased or a title to be forgotten forever.

The promise of Fallout 76 upon release was undeniably attractive. The chance to play in a persistent Fallout world with other players, all trying to make the best of a post-nuclear war Appalachia region was enticing. It was an idea that excited the masses, so when the release failed to deliver in meaningful ways, the collective sigh of frustration (and abhorrent internet ranting) was heard around the globe. Instead of a thriving radiated colony of vault dwellers, players got an empty map that felt like a museum exhibit, not a living world along with a host of bugs and odd gameplay choices (bobby pins anyone) so most people bounced off, feeling let down in the process.

But fast-forward nearly three years and to Bethesda’s credit, they have been continually working hard at making it a better place to play, so I thought it would be time to dive back in and see if it is now a game worthy of your time. While I played a bit upon its initial release, I thought for the purposes of this article, that starting afresh was the best way to go, so I scrapped my previous character and started all over again, rising from Vault 76 once more.

The first thing I noticed was how much smoother the experience was. When I first played it was a stuttery jerky mess of pop-ins and glitches, but now everything seems to be running wonderfully. That being said, the tech it is built on is certainly showing its age, this is as good as this tech is going to look, but it doesn’t hold a candle on similar titles, or even Bethesda’s own Elder Scrolls Online. With that in mind though, my preference is always to have a smooth experience over a flashy one and that is exactly what Fallout 76 gives players now.

Starting out I now had two main missions to follow. The original “Responders” missions or a new string of missions that are handed out by NPC characters throughout the world. NPC characters are one of the biggest additions Bethesda have made since its release and their inclusion goes a long way to ridding the game of that empty feeling it originally had. The NPC missions themselves are nothing exceptional but do offer a good bit of traditional style RPG action for any players out there that just feel like some questing. The other thing these quests do is offer a bit of personality and background to the Appalachia region. The original release really failed to capitalise on what is a totally unique setting for a video game and these NPCs and new quests go a long way to fixing that.

What is immediately apparent when exploring the map is that despite all the problems at launch, Bethesda has fostered a strong and dedicated community of players. I was amazed at some of the houses and campsites that I stumbled across, all built with care and attention by the hardcore players and almost without exception, places that are welcome to travellers, providing crafting stations and vending machines for those that happen to wander by.  honestly, some of these buildings are marvellous in their complexity and I can do nothing but admire the commitment and work that players have put into them, something I could never do myself.

Perhaps one of the biggest problems in Fallout 76 is something that could be said of pretty much all Bethesda RPGs and that is the UI and menus. It all seems very clunky and fiddly and that hasn’t noticeably improved. In fact, things have actually gotten worse because as the game has gone on, Bethesda has added a host of (welcome) additions but haven’t improved navigating the UI at the same time. Everything quickly becomes very convoluted and a chore to use. I am not sure what the solution here is but it is clear for future RPG projects like Starfield and Elder Scrolls 6 that Bethesda needs to completely redesign the way they do inventory, levelling and crafting.

The really important thing to note with Fallout 76 now however is that it is actually a fun place to play. Whereas before it was a constant trial of bugs and strange design choices, Bethesda has managed to turn it into an entertaining playground. There are still things I can look at and criticise, but for the most part, these feel more like odd quirks as opposed to negative aspects, making them easier to forgive in what is admittedly a game with a grand scope. It may simply have been that the developers bit off more than they could chew when they first launched and only now are getting things to where they want them to be. Whatever the case may be, Fallout 76 is a much better beast than when it first launched, it has a thriving and dedicated community and while it isn’t perfect, there is still a lot of fun to be had. With the game now available on Gamepass, there is even less of a barrier of entry so really there hasn’t been a better time to check out this slight oddity from Bethesda’s back catalogue.