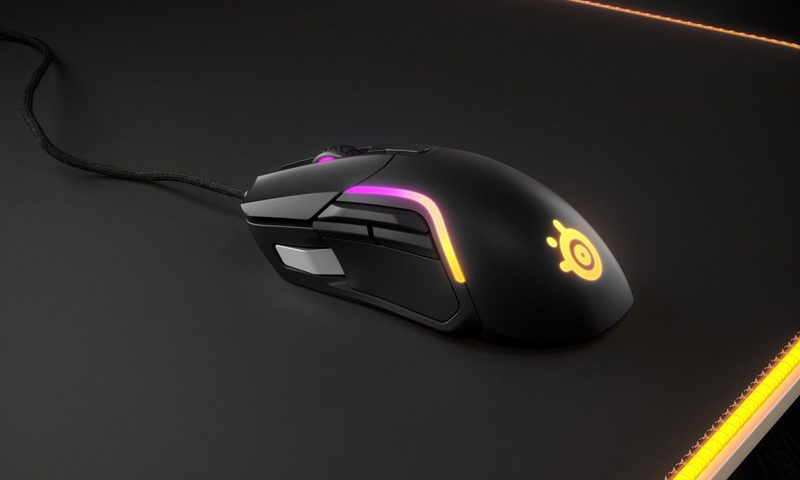 It’s been well over a decade since I last unboxed a prestige gaming mouse during my somewhat brief foray into World of Warcraft, a piece of hardware I abandoned when its soft rubberish exterior, which once felt so comfortable to grip began to de-vulcanise and left it a sticky, crumbly mess. Given this extended gap, I wasn’t quite sure what to expect when the SteelSeries Rival 5 arrived on my doorstep in a small, unassuming box. Forgoing the gaudy excess of many ‘gamer’ products, the Rival 5’s minimal packaging suggests Steelseries have a lot of confidence in the product inside; forget weight cubes, different shell sizes, USB dongles and an array of flyers and inserts, the Rival 5 comes with nothing more than a small instruction booklet and an extremely smooth 2 metre ‘Super Mesh’ USB cable that promises uninterrupted motion over almost any surface.

On first inspection, the Rival 5 seems subdued in its design, apart from the now-ubiquitous RGB configurable colour scheme that undulates across its surface. It boasts 9 programmable buttons including one paddle switch, many of which weren’t apparent at first glance and it took a brief dip into the instruction booklet to wrap my head around the layout. As someone who rarely games on PC and certainly isn’t up to date in any way with the competitive side of any popular eSports titles, terms like ‘Palm Grip’, ‘Finger Grip’ and ‘Claw Grip’ are lost on me; a quick analysis suggests I favour holding a mouse in a ‘Finger Grip’ style, and that the Rival 5 is exceedingly comfortable when held in this manner. Already owning a low-friction mouse pad, it was no surprise that the Rival 5 glides over the surface, its weight low enough to raise slight concerns about durability while simultaneously feeling sturdy enough to survive years of use, provided the user doesn’t have a predilection towards blaming their hardware for a loss and punishing it accordingly.

Setup was a breeze across PC, Mac and Xbox Series X, making the Rival 5 completely ‘plug and play’. For those wanting to take full advantage of its functionality, it requires the installation of Steelseries’ GG software which is currently available for Windows 8.1 and above. This package combines their previous ‘Engine’ hardware management utility (which Mac users will need to install to customise a Rival 5) alongside ‘Moments’, their gameplay capture/editing software. Once installed, it’s possible to customise every facet of the Rival 5 from button functionality, macro and profile creation, mouse sensitivity and RGB features. While the Rival 5 comes with 5 preset CPI levels, these can be customised to any number between 100 and 18,000 depending on user preference and need – while the basic presets proved enough for me across PC and Xbox playing Spin Rhythm XD, Gears of War 5, Tabletop Simulator and an assortment of other titles, more competitive users will no doubt get quite a lot out of the degree of customisation options available, especially if they jump between MOBA, FPS and RTS genres regularly. What’s more, the Steelseries website boasts a number of configurations available for popular titles like CS:GO, Fortnite, League of Legends and of course World of Warcraft.

Retailing at $120AU, the Rival 5 is a versatile, mid-level price point piece of kit that feels great in the hand and looks the part. While its right-handed wired design won’t suit absolutely everyone, SteelSeries’ GG and Engine software ensures that for most it will provide a level of flexibility and customisation that won’t see it outmatched in many areas. While the lightweight build itself may not appear to be the sturdiest at first glance, it doesn’t feel flimsy in the slightest, with IP54 switches rated for 80 million clicks ensuring the Rival 5 should serve both dedicated esports players and casual users for years to come.

The Steelseries Rival 5 retails in Australia for as low as $119 and is currently available for preorder at a range of outlets with a late July release.

The Steelseries Rival 5 hardware used in this review was kindly provided by SteelSeries Australia.