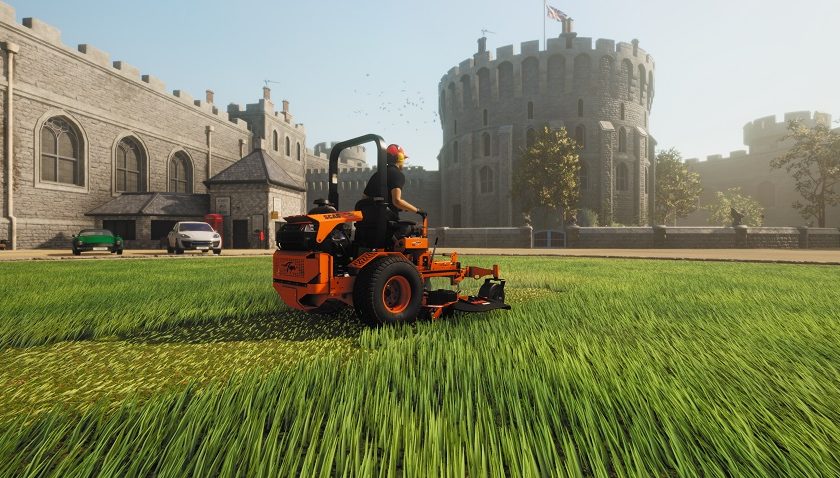 I cared nothing for grass until I became a homeowner. Once this happened, I became a regular at Bunnings, perusing the mower aisles for the perfect combination of grass cutter and whipper snipper. Once our kikuyu was freshly laid, it became a weekly ritual to trim the edges, shear the growth and feel satisfied to look out across my verdant domain replete with the knowledge that I had stayed nature’s aggression for another week.

I was thus naturally drawn to Lawn Mowing Simulator, although perhaps not quite prepared for how un-gamey it is. This is serious business, requiring you to start as a sole contractor, mowing lawns for 40 mins at a time, earning biscuits and eventually saving enough for bigger lawnmowers, perhaps some employees, some essential repairs and maintenance, and upgrades. Daddy wants a bigger ride on!

Each job begins with an inspection around the grounds to look for objects that might damage your mower – toys, frisbees, dog crap, that kind of thing. Once they are all picked up, it’s time to jump on your machine and get mowing – and that’s pretty much it for the next 30 minutes to an hour. Mowing the lawn, going over missed patches, making sure you don’t crush any flowers (you’ll get fined) or cut up the grass by turning too sharply (you’ll get fined again). Mow the lawn, collect your pay, go to the next job.

Which sounds a bit boring, and to be honest it is. There are no gamified objectives here, no stats to unlock or levels to increase. Just your arse and the grass. But then, there must be something here, because I found myself hooked as soon as I started. Even though I knew it would be another half an hour of monotonous mowing, I stayed with it, white-knuckling the controller as I nailed smooth turns and carved out field circles in each yard, skirting flower beds and squaring off garden sheds. I can’t see this as something to be clocked, but rather a calming meditation to put on of an evening to free my mind to ruminate on matters of state. Much like real lawn mowing.

I don’t know anything about brands, but apparently, there are proper mower brands in here. If I were to get picky, I’d say that the frame rate, at 30 fps, feels quite chuggy on the Series S, but we can perhaps hope for an upgrade in that area to come. I would also have enjoyed the addition of some other aspects of gardening preparation, such as whipper snipping the edges or using a leaf blower to clear paths and driveways of lawn clippings. All you get to do is back your mower up to some bags and hold the A button to empty your load.

Lawn Mowing Simulator was reviewed on an Xbox Series S with code kindly supplied by the publisher.