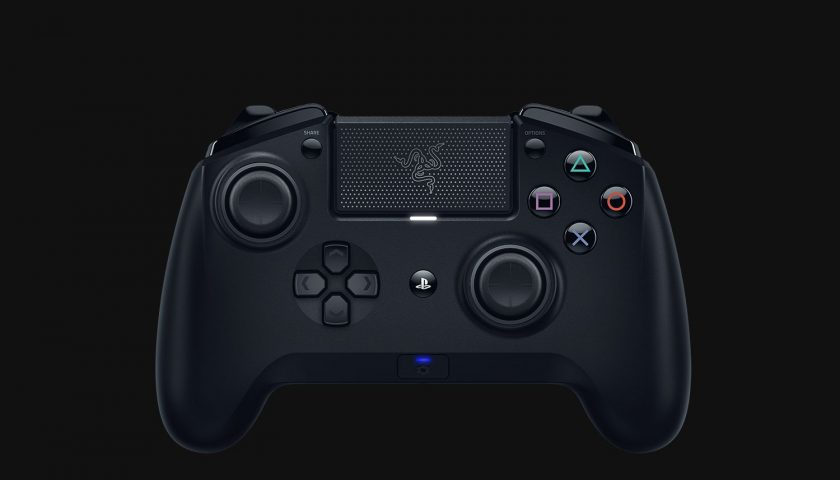 3rd party controllers aren’t anything new, they’ve been around as long as there’s been consoles. The quality however, have always been a mixed bag. For every Hori N64 Pad, a flimsy Honeybee SNES controller that would suddenly stop working one day, existed (I’m not bitter, no, not at all).

Razer isn’t a new player to this game, there are plenty of products out there with their branding and for the most part, they’ve produced some amazing high quality peripherals, the latest of which is the Razer Raiju TE for the PS4 and PC. But before you shell out for one of these babies, you’ll probably want to know what you’re getting for your hard-earned dollars, so let’s get to it!

Moving away from the typical PS4 controller design, the Raiju is more reminiscent of the XBOX One controller. A side by side comparison of the two makes this more readily apparent.

What’s not so obvious however is that the sides of the Raiju are squarer, making the controller a bit boxier and making it feel a little larger than what we’re used to. Its weight is also noticeably heavier as well, not that one would get tired arms from holding it, but the extra weight is noticeable. The reasons for this would be due to the extra features hiding under the covers and the flip side to it all is that it gives the controller a much sturdier feeling overall.

The thumb-stick joysticks deliver really smooth movement and control and it’s a big improvement over what the XBOX and PS4 offer in their current offerings. Something that has always bothered us about the PS4 Dualshock4 controllers is the springy and stiff feeling when using their thumb-sticks. A quality that the XBOX One controller always had over it, the Raiju takes this up another notch and feels great!

The Raiju’s buttons have a sleek and fluid feel when pressing down as well. This is due to the actuation point being faster than that of the Dualshock4. There was no better way to test this in action than with a few good sessions in a competitive game, so we loaded up Mortal Kombat 11 and went to town.

Even though button pressing just generally felt better, the D-Pad design stood out as the most impressive design and upon further investigation the reasons became obvious. The entire D-Pad is in a concave shape, making the sliding of your thumb easily to move between the arrows, whereas the Dualshock4 sits more parallel to the controller’s base with a slight indent towards the middle.

Flipping this puppy around and you’ll notice the abundance of extra buttons on the back in the form of addition trigger / shoulder buttons as well as some paddles directly on the back. Obviously, these would be prefect the for lovers of racing sim out there, the best part is that these are programable (to a point) so they’re there for whatever you really want to use them for.

In our opinion though, the best feature of this controller is the Trigger Locking mechanism. With a flick of the switch you can change the actuation point of your trigger buttons, making it significantly quicker to activate the button.

This obviously makes it a lot quicker for button pressing. To test out we loaded up a game of Call of Duty as well as some more MK11. In both cases the Raiju felt better than the Dualshock4 counter-part where the press and release felt sharper, quicker and more to the point. This felt more important in Mortal Kombat where said trigger button was used for blocking and timing becomes incredibly important.

The best part is that is that this feature can be operated on the fly and if you prefer the full motion of the trigger buttons, you can slide it back and forth whenever you feel like!

The only real downside to this is that the Raiju isn’t exactly cheap. The controller itself feels like its build to last and definitely has a high-quality feeling when playing games with it. It easily sits above the Dualshock 4 and XBOX One default offerings, but both of those are exceptionally cheaper and chances are you already have one or two spare sitting around as well.

The type of gamer who’s going to invest in this product would be those looking for those slight edges in their gaming and generally speaking it would be the competitive gamers out there. For fighting, racing and shooting games out there, the benefits are there to be had if you’re willing to invest and the Raiju will deliver on that with a quality that’s hard to find elsewhere.